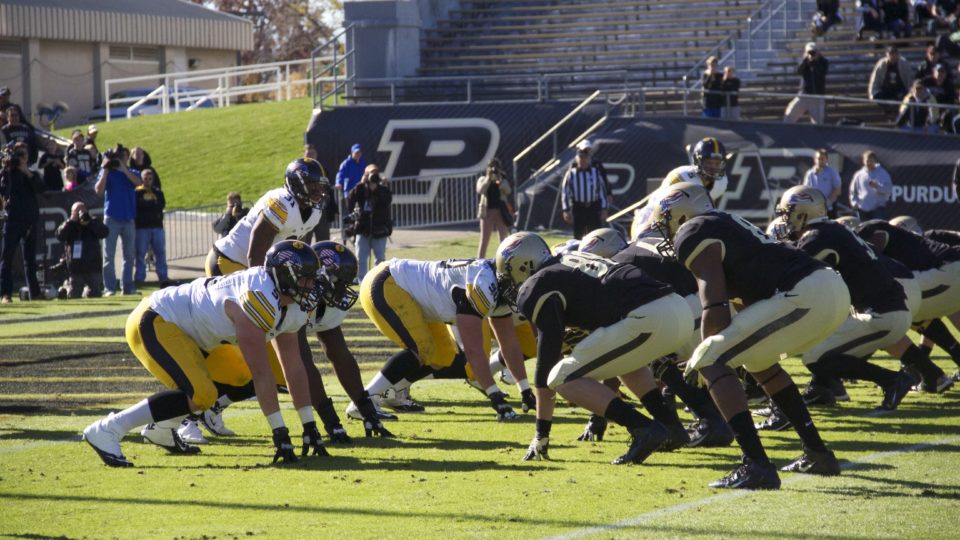 After a yearlong hiatus from being bowl eligible, the Iowa Hawkeyes are bowl bound after a convincing 38-14 victory in West Lafayette against the Purdue Boilermakers. Both teams had three and out drives to start the game, and the Purdue defense came up with a huge stop on defense to halt a 60-yard drive by the Hawkeyes deep in Purdue territory.

Jake Rudock had one of his best games of the season completing 12 of 20 passes for 191 yards and 2 touchdowns in the victory. Kevonte Martin-Manley’s only catch of the day was Rudock’s first touchdown pass for 22 yards with about 2 minutes remaining in the first half on a beautifully thrown ball. Jake Duzey added the other touchdown reception with a 3-yard catch from Rudock to put the game even more out of reach for the Boilermakers about halfway through the fourth quarter. Backup quarterback CJ Beathard ran for a 5-yard touchdown in the waning minutes of the game for his first rushing touchdown of the season. Mike Meyer converted on a 28-yard field goal to round the scoring for Iowa.

The Hawkeyes tallied 509 yards of total offense in the game. 318 of them came on the ground, which is the highest total in a game for Iowa since 2002 against Minnesota. That  Jordan Canzeri was the main guy in the rushing attack the whole day. The sophomore torched the Purdue for a career-high 165 yards on 20 carries with a touchdown. Canzeri gave a lot of credit to his offensive line for allowing him to run all over the field.

“When they have the huge holes, all I had to do was see green and run,” Canzeri said. He also praised his fellow teammates for pulling out the win and becoming bowl eligible. “We worked so hard in the offseason. We did so many things to not be in the same situation we were in last year. It hurt, and we told each other that we never wanted to go through that again.”

Coach Kirk Frentz echoed Canzeri’s words. “It’s good to get that sixth win out of the way now. We can focus on the last two games of the season. We talked briefly about the big picture, but we still games with Michigan and Nebraska coming after the bye week.”

The defense stepped up for Iowa as well. Christian Kirksey led the charge with 8 tackles as well as recovering a fumble forced by Anthony Hitchens. They also held Purdue to just 266 total yards, with 53 of those coming on the ground. Mike Hardy and Drew Ott were next in line in the tackle department with 6 and 5 respectively. Both Hardy and Ott also combined for Iowa’s two sacks on the day.

Iowa has a bye next week and will return to action on Saturday, November 23rd to face the Michigan Wolverines at Kinnick Stadium. It will also be senior day for the team. Kickoff time has yet to be announced.