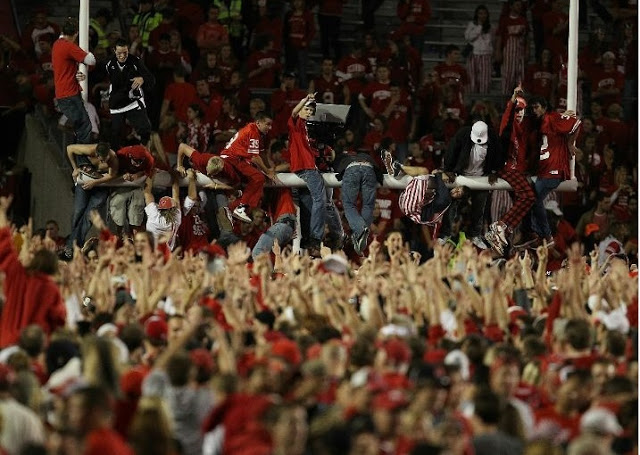 Look, I’m all for motions of euphoria for outlasting an opponent. I get it: big wins are phenomenal. You circle the date on the calendar as soon as you unpack your bags in August. All week you hear about the heroics of the opposing team, and when the moment of the showdown finally arrives, your squad prevails.

Many of us have been there. It’s wonderful, it’s life changing. But students, pay heed:

The pointless storming the field has got to stop.

Now, I’m not talking about those beloved DII schools who knock off a FBS power in a cupcake-gone-wrong. An unranked team beating a ranked one on a buzzer beater? Good for you. Leap over the railings and embrace your team. That’s how the tradition was intended. And frankly, when it is done right, all the rest of us can do while watching from afar is golf-clap.

But it’s the ranked fans who lose their minds and unnecessarily charge that makes me throw my hands up. It’s those clusters of students who believe every home victory is a Super Bowl. Those few mis-informed apples who think it’s cool or justified just because they knocked off a tough conference foe. In today’s college sports, it seems like every victory is met by students sprinting to midfield or midcourt, pig-piling on top of one another in a cluster that is downright dangerous. It’s those moments where I finally wish those on the other side of my television could hear me.

What’s wrong with a few excited students celebrating, you ask? THIS is not a few. Neither is this. Or even this.

This phenomenon has gotten completely out of control and every time I see a student body rush the stage when they shouldn’t it makes me cringe.

The latest culprit? The #5 ranked Stanford Cardinal. You read that right, NUMBER FIVE. The reigning Rose Bowl Champs knocked off the #3 Oregon Ducks 26-20 Thursday Night, in a game that turned laugher into nail biter in a matter of minutes. Not a second after Tyler Gaffney’s 45th attempt was whistled down did some of Stanford’s finest come rushing towards the victorious Tree. They mauled quarterback, Kevin Hogan and Coach David Shaw, who could do little but watch his surroundings for the entirety of the postgame interview.

This is not to pick on the Cardinal or some of their foolish fans, nor are those select few a representative of the thousands that left Stanford Stadium voiceless last night. But rushing the field in that kind moment is downright idiotic.

People get hurt in those scrums, folks. Players on the winning team getting tackled for their heroic play, or those on the losing side unable to quickly retreat to the sanctuary of the road locker room and are forced to face thousands of screaming kids who probably didn’t exercise caution during their pre-game “rituals” makes for a messy situation that is just asking for trouble. We have security and police officials at every major sports venue in the nation, but any protection except self-preservation in those scrums gets thrown right out the window.

I’m not saying stop the ritual altogether, I’m saying do it right. Nobody has successfully curtailed this barbarism yet, so here are my guidelines:

For arguments sake, the threshold for defeating the top team in all the land should be at 15. Anything higher than that, and in many circumstances you should have a fighting chance. These are the games that are nationally televised, the kinds that College Gameday unloads their massive set for.  While being in the top 15 theoretically means you should be competitive with the top ranked opponent, not the same can be said for the top 20 or the outskirts of the top 25 poll.

Any other time? Go nuts. You just beat the top ranked team in the nation, the highest seed with the best record at that time. You should be excited, because if you’re not in the top 15 you probably have no business beating them, anyway.

When the second or third best team comes strutting into the gym, and they fall, it’s a beautiful thing to be on the other side. It’s probably a program defining victory, the needed resume builder for March or for a January Bowl Game. But don’t treat it as beating #1. It’s not. There is a team better than the one you just beat. Act accordingly.

I’m all for ranked teams wanting to celebrate a big victory. Just because the record is hot doesn’t mean you have to be cold about a W. But chances are if you’re ranked, this isn’t your first rodeo when it comes to big games. There are a few marquee ones on the calendar, and yea the win is nice, but anything but the top team in town isn’t David vs. Goliath.

Rule #4: Lower Division of Sport? The Moment is Yours!

Akin with the first rule, this one belongs to the earlybirds on the schedule, the glorified pre-season games for the big conference teams looking to bolster their win columns. Many of these games call for a tail whipping and a “thanks for playing” check on the bus leaving the stadium. So if one of these D1-AA or DII actually knock off their D1 brethren, party on, because it is probably the single biggest victory in school history.

Rule #5: Beating a Rival is No Excuse.

How many times has Allen Field House ever flooded the floor for knocking off Kansas State?

Rule #6: Unranked Teams Must Use Discretion.

This is the grayest of areas on the matter. Unranked could mean being the #26 team in the country, or being at the bottom of DI sports. Comparatively, what luster is there beating #20? What if the program is having a down season, but is normally a ranked team? There are too many variables with those on the outside looking in on the top 25. Grudgingly, I ask students of these schools to put some thought into their decision-making. For sports’ sake, don’t be dumb.

Six rules to contemplate and (probably) dissect. While this ship has sailed on college football for 2013, think of this as a basketball preview for the upcoming campaign. If 2013-2014 is anything like it has ever been, college basketball will be filled with upset performances and buzzer beaters.  There will be nights that all students (myself included) will want to do is rush the floor and bombard the team for winning an improbable victory. But hopefully, unless it’s against the top dogs, we will all cheer thunderously from our seats. After all, the players probably stink anyway.