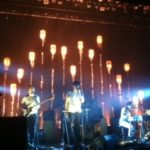 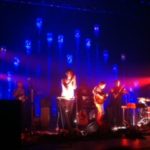 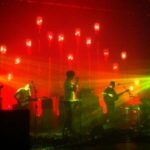 The atmosphere at the Englert Theatre on April 4 couldn’t have been more appropriate for a concert. Patrons lined from the doors all the way to the Ped Mall. All of this, in anticipation for Grizzly Bear’s return to Iowa City for the first time since 2007. Grizzly Bear is currently touring with Owen Pallett in support of their hailed album Shields (2012). Started as the project of guitarist/keyboards/vocalist Ed Droste in 2002, they have since become Daniel Rossen, Chris Bear, and Chris Taylor who together create one of the most respected bands around today. With four studio albums and a thorough touring record, Grizzly Bear have accumulated many fans who adore their records and live performances.

The talented instrumentalist and composer, Owen Pallett (formerly Final Fantasy) has been opening on their current spring tour. His multi-layered performances, composing of loop pedals and his amazing abilities, are renowned for their intensity and craftsmanship.

Together, Grizzly Bear and Pallett graced the Englert perfectly. The venue was full and after a brief introduction, Owen Pallett took the stage. He and his band put on an energetic and infatuating performance. Pallett insisted that their live show doesn’t sound like their albums—this is true, but true in a fantastic way. The music, experimental, baroque-pop if one might give it a name, complemented the theater splendidly. The show, which began with most people sitting in their seats, ended with everyone standing and cheering. Grizzly Bear may have been the more familiar name, but Owen Pallett set a hell of a standard for them to live up to as the night went on. After some friendly banter and thanks Pallett left to an excited crowd.

Shortly after, Grizzly Bear took the stage with a few hellos and went right into their set. Grizzly Bear’s blend of folk, indie rock, with elements of psychedelic and lo-fi couldn’t have suited the live show better. Like Pallett, their live show takes on a different dimension when played live. It’s louder, more intense, and it emits an emotional intensity that can only be experienced at a concert consisting of musicians with immense talent. Their light show was impeccable; fifteen or so lanterns, all different heights but all towering, with jellyfish-like characteristics emitted light and blended with the other stage lights. A plethora of colors beamed throughout the show that added depth to each song being played at the time. It was a sight to see. For the most part, Grizzly Bear chugged through their set, but with a few comments about returning to Iowa City, short-vibes (Ed’s words), big beers, and their appreciation for Iowa City life for the few days they stayed in town.

Grizzly Bear opened with “Speak in Rounds” and then continued to showcase the delicious new batch of songs off Shields. That being said, songs from Veckatimist and Yellow House peppered the set as well. “Two Weeks,” and “Knife” sounded great. There never seemed to be a note Grizzly Bear or Pallett missed throughout the show. As awkward as it sounds, “professional” would be a word to describe it; but it was so much more than that. After a long set, Grizzly Bear left the stage only to immediately be beckoned back on stage by the crowd. The show winded down and they promised, “Next time it won’t take so long” in reference to their time between shows. I could go on and on with the details of this show: it was gorgeous. My advice, go see Grizzly Bear, live videos don’t necessarily do their shows justice. This one was one not to miss and one never to forget. The Englert emptied and for a good while, everyone who left was “vibing.”