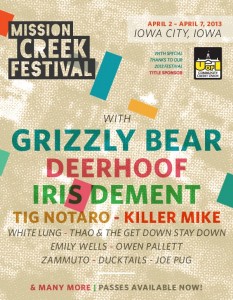 The Mission Creek Festival is excited to release the first lineup announcement for this spring’s festival. The festival will feature performances by Grizzly Bear, Iris Dement, Tig Notaro, Killer Mike, Deerhoof, Thao & The Get Down Stay Down, Cornelius Eady, Amber Tamblyn, and many more. The festival runs April 2-7 in venues throughout downtown Iowa City.

As with past festivals, this year’s lineup features a strong balance of national, regional, and local musicians and writers. Grizzly Bear has been described by Rolling Stone as “one of indie rock’s most sophisticated songwriting teams” and has headlined venues from Lollapalooza to Radio City Music Hall in the band’s eleven years. Iowa City folk legend Iris DeMent will return to The Englert Theatre for a special evening of music on the heels of her first album in seven years, Sing the Delta, which has been described by NPR as “Americana album of the year.” The lineup also includes comedian Tig Notaro, Atlanta-based rapper Killer Mike, critically acclaimed rock band Deerhoof, and alternative folk-rock act Thao & The Get Down Stay Down. The festival’s literary lineup includes writer Roxane Gay and poets Cornelius Eady and Amber Tamblyn, along with a diverse collection of press/journals from throughout the country.