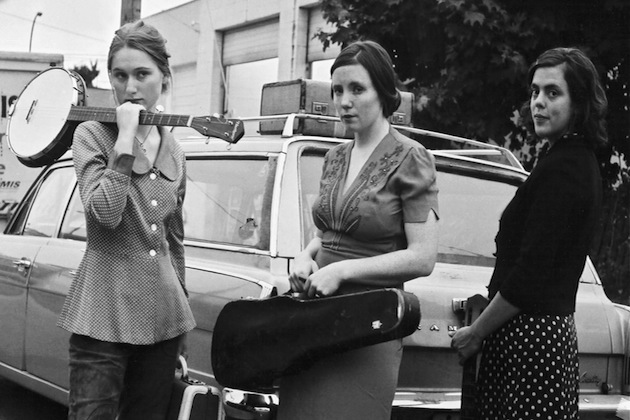 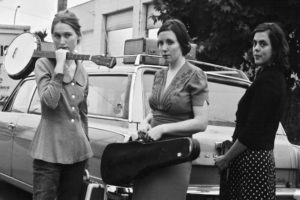 The Be Good Tanyas are from Vancouver, British Columbia, but they blend uniquely American styles to create a sound all their own. Appalachian mountain-music rhythms combine with old-school blues to create achingly heartfelt songs. They are songs that deal with love, loss, and the struggle to come to grips with an often unfair and ugly world. At the Englert Theatre on Monday November 13, they sounded as comfortable playing Willie Brown’s “Future Blues” as they did playing their final song of the night, The Beatles’ “Here Comes the Sun.” In that way, their music transcends both time and place. Frazey Ford’s breathy, soulful voice conjures images of a bygone era, while expressing hope for an uncertain future. In short, they are a paradox.

The concert kicked off with a set from Phil Cook. He’s a member of the group Megafaun from Durham, North Carolina. He took the stage shortly after 8 PM and began playing an instrumental piece on his steel electric guitar. He followed that up with Bob Dylan’s “Alberta” and then Randy Newman’s “A Memo to My Son,” which he dedicated to his own 16-month-old son back at home. During that song, a baby in the audience could be heard laughing, adding to the song’s emotional effect and bringing smiles to the faces of audience members. He closed his set with a few of what he called “unfinished” songs. They were all-instrumental works-in-progress, but in a strange way they felt polished. His last song, “Ballad of a Hungry Mother,” was played without an amp and felt deeply personal. During it, a hush fell over the audience as it became entranced by the twangy slide blues. The set was genuine, and worked as an excellent lead-up to the main event.

After a brief intermission, the Be Good Tanyas took the stage to a roar of applause. After playing the decidedly down-tempo songs, “In Spite of the Damage” and “In My Time of Dying,” they brought the mood up a bit with “Ootischenia.” Trish Klein’s playful banjo in the background carried the song, inspiring some in the crowd to clap along to the beat.

A couple songs later they played “Scattered Leaves,” a song about accepting past mistakes. As the three came together for the sections where they sang in harmony they looked upward into the stage lights high above, casting a dull crimson glow over their faces. It was as if their collective voice fed off of that light and sent its implied warmth out over the audience. A standup bass set inconspicuously behind Sam Parton at stage right kept the beat throughout and rattled listeners’ ribcages.
Throughout the first half of the show, a woman in the audience had been shouting “Only in the Past!” in between songs. Finally, Parton took time to really look at her and determined that she knew who she was.

What followed was unusual, to say the least. The band informed the audience that the woman was their “first fan ever.” After a brief conversation with the band, Karen was asked on stage to tell her story. She had met them twelve years prior at the Saddle Creek Bar in Omaha, Nebraska. Ford asked the audience, “This happens in Iowa City, right? This is a storytelling town?” As she told her story, the band began playing the lead-in to “Only in the Past,” occasionally directed by Karen to either get louder or softer. Her short sentences fit with the rhythm of the song (sort of) and created a very “beat poetry” vibe in the theater. Her story concluded and she headed back to her seat to polite applause from the audience, half of whom seemed only to want the show to continue more or less uninterrupted.

At the end of the show, Phil Cook returned to the stage to play a few songs with the band. They first played their popular single, “The Littlest Birds.” During it, Cook and Klein played off of one another in brief back-and-forth guitar solos that created movement behind the harmony of the Tanyas’ voices. It was a fan favorite and felt almost like the climax of the show. They then played a cover of Neil Young’s “For the Turnstiles.” Harmonica and banjo filled the air and the audience once again clapped along.
Afterward, they left the stage to shouts of “More! More!” Before the applause had stopped they were back. They brought the mood down a few notches with a slowed-down rendition of “Here Comes the Sun.” After thanking the audience they headed backstage to another round of applause. This may have been The Be Good Tanyas’ first time in Iowa City, but after a show like this, they’ll certainly be welcomed back anytime.