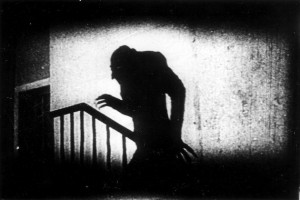 In its advent, F.W. Murnau’s Nosferatu frightened moviegoers of the 1920s. Now with a little help from the Alloy Orchestra (percussionists Terry Donahue and Caleb Sampson and keyboardist Roger Miller), Nosferatu, eine Symphonie des Grauens is all the more frightening.

On October 11, 2012 the band will be grace the stage of the historical Englert Theatre, which is in the midst of its Centennial celebration. The group will perform Nosferatu, which is an adaptation from the Bram Stoker’s classic Dracula. Although it was never approved by Stoker’s estate for unauthorization for movie rights, Nosferatu has nevertheless become a classic with the iconic images of Max Schreck as Count Orlock preying on Greta Schroder’s Ellen Hutter.

Nosferatu has been brought to Iowa City by way of the nonprofit arts organization, FilmScene. Within a year, Filmscene has successfully secured an interim spot in the old Vito’s for an art-film house, launching the Starlite Theatre movie series on the Riverside stage in City Park and is pursuing a permanent spot in the proposed building The Chauncey, a multi-use space that would be next to the Chauncey Swan Parking Ramp. Just announced this past week, The Chauncey would not only house Filmscene with its two movie screens, but also a café, gallery space, and twelve bowling lanes.

So come celebrate Filmscene’s latest achievement, grab a glass of wine or beer from concessions, and enjoy the following events in the next two weeks and stay tuned for more!

• October 11: Educational Workshop with Alloy Orchestra at the Englert Theatre at 3:30 pm