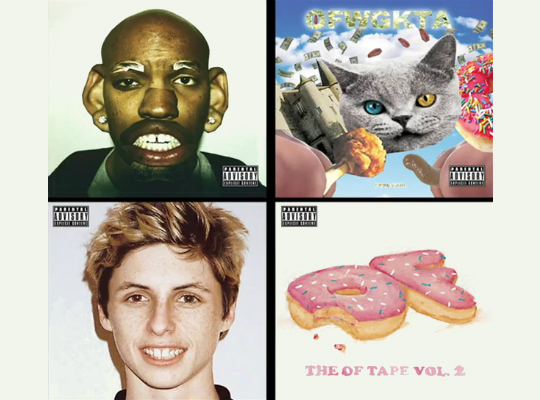 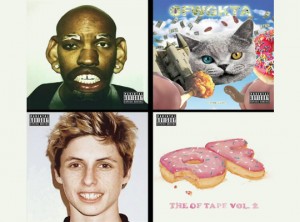 Collaborative rap crew albums are a tricky thing to get right – We Are Young Money was laughable, Wu-Tang hasn’t done anything worth talking about since 8 Diagrams, and if you know of a Dipset tape that you’ve made it through without your finger on the skip button, I’d love to hear about it. Collab albums have listeners wading track after track, waiting for a heavy hitter and suffering through Lil Twist and Cappadonna in the meantime.

So, coming into The OF Tape Volume 2, some skepticism is a warranted. It’s been almost impossible to avoid at least overhearing the antics of Tyler, The Creator or speculation on the whereabouts of Earl Sweatshirt (who makes his knockout comeback at the end of the Tape), but that’s where the dialogue about Odd Future typically ends – unless you run in circles with some pretty diehard OF fans, it’s unlikely that you’ve ever found yourself discussing Mike G or Syd Tha Kid.

The OF Tape Volume 2, though, is one of the rare instances in which even the sleepers of a hip-hop crew (a term that seems increasingly pejorative to describe Odd Future) get to shine. Though it was released a year ago, Mike G’s “Forest Green” is a show-stealer, lending the impression that he’d do fine over just about any Left Brain beat. Even The Internet, whose Purple Naked Ladies flew deservedly under the radar, comes through with “Ya Know,” a successful rendering of the jazz-fusion attempts of N.E.R.D.

Those who have already established a name for themselves within Odd Future don’t fall short of expectation – Domo Genesis and Hodgy Beats, whose verses dominate the majority of the album, sound like they’ve been doing this forever, passing bars back and forth on tracks like “B*tches” as if they wrote each other’s rhymes. Frank Ocean finds a home more natural here than he ever has before with the group. His work on the gorgeous “Analog 2” and his solo contribution, “White,” ensures an involved and illustrious future for the OF crooner. Tyler also shows some considerable growth. Both his rhymes and production on The OF Tape Volume 2 are tighter and more accessible than on Goblin, hinting at a return to and evolution from the better parts of his breakthrough mixtape Bastard and flexing the kind of wit and non sequiturs that made Lil Wayne so interesting during is 07-08 mixtape reign.

The OF Tape Volume 2 finds its end at “Oldie”, possibly OF’s strongest track to date. It’s a ten minute opus with contributions from almost every member, even the seldom rapping Left Brain and joker Jasper Dolphin. Earl Sweatshirt returns here, reinforcing his pre-Samoan promises for grandeur. It’s a showcase of why Odd Future Wolf Gang Kill Them All holds the power they do, and why they’re one of the few groups that can actually pull a project like this off.