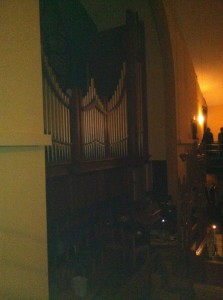 Article and photo by Christian Craig

The crowd leaving Tim Hecker’s Thursday night contribution to the Mission Creek Festival at First United Methodist Church was a quiet one. Some of them sat on the church’s stoop, some smoked, but no one seemed ready to discuss what just happened in the sanctuary.

The show started promptly at 8 with local musician Ex-Action Model. He switched between some fairly dry soundscapes and dancey loops as aggressively hip attendees filled the pews and ignored what was happening onstage.

Perhaps it was the fault of the venue – his music felt better suited for a weeknight at the Yacht Club – but neither audience nor performer seemed satisfied.

Colorado Native Nathan Wheeler took the stage next and set the show in a more appropriate direction. Dressed in a robe that put him somewhere between a monk and a Star Wars enthusiast, Wheeler constructed his set-up alone, a MacBook, pedals and processors, and an electric, light-up rose. He softly explained that his first piece details the Hungry Ghost Realm (one of six realms described in the Buddhist faith in a period between death and rebirth). He was spot on – it was a wandering drone ripe with sinister desire, loops and glitches begging to be appeased to a crowd with no answers. It was one of two tracks that comprised a set of over thirty minutes that sounded like something close to the soundtrack of a Gaspar Noé film.

Hecker came on a little after nine. He didn’t have a mic, gave a little wave to the crowd and hid behind the pulpit with his equipment and the keys to the church’s organ. Before he started, the church went dark – every light, with the exception of two candles on stage, was turned off, leaving Hecker and around one hundred people with the least amount of visual stimuli I’ve encountered at a live show.

Tim Hecker’s music is that of dialogues. During his set (one song, well under an hour) it felt as if the organ and Hecker were in conversation, the organ offering a sound, Hecker considering it, processing it, twisting the tones and responding. They would beam at each other, find common grounds, disagree and clash. The audience played the part of a bystander, as if they were a group of people lucky enough to overhear two savants strike gold.

To call Tim Hecker’s set, or recorded music, for that matter, atmospheric would undercut the weight of what’s really going on. There’s a force here that just isn’t present among his musical peers – it’s hard to find another creator of droning, shoegazey loops that can produce sounds as psychologically loaded as his. His show on Thursday and the album it played off (Ravedeath, 1972) read less like music and more like pieces of literature. It’s intensely lyrical noise that is seldom easy to process. The crowd outside the church had experienced something bigger than any one person (Hecker and organ included) present, and words don’t always come quickly after something like that happens.