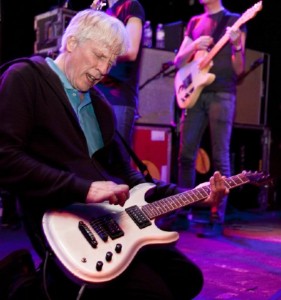 At Gabe’s on Tuesday night Rhys Chatham gave an incredible performance. He played three songs totaling an hour, but for anyone familiar with his music and status as a No Wave precursor, the night seemed much shorter.

Chatham’s minimalist/avant garde compositions can’t be pulled off with just one guitar without a slew of effect units, so Chatham invited members of local IC bands for help. Nine guitar players and a drummer joined him, forming a semi-circle around Chatham, who positioned himself front stage center. He played the role of a conductor to his mini guitar orchestra, nodding and smiling to them in turn while occasionally letting loose with his own guitar. Sometimes his attention strayed from the musicians to the audience, drawing them in and making his performance even more dynamic.

Chatham’s music combines drone, punk, and minimalist qualities that are both unique and influential. He has worked with musicians ranging from Philip Glass and Steve Reich to Sonic Youth and Brian Eno. Since the 70s he has steadily composed music; several years back he even composed an opera for 200 guitars called “A Crimson Grail.” No Wave luminaries such as Big Black, Swans, and Lydia Lynch all owe a debt to Rhys Chatham, but it is obvious that he is underappreciated – although the audience at Gabe’s was enthusiastic, the venue was only half full.

Included in the song roster was his classic “Guitar Trio”. Supposedly inspired after seeing The Ramones play, “Guitar Trio” repeats an E chord riff over and over for thirty minutes. The layering and receding of sound around the repetitious rhythm not only keeps the song interesting, but danceable, too. Another song experimented with “unconventional” tuning (Chatham took a few moments to randomly misalign his tuners) that managed to make sound that would usually be as bad as nails on a chalkboard quite appealing instead. Although I wished for a longer set list, his performance was more than satisfying. He ended like a true gentleman, taking a bow to the audience and shaking the hand of each musician. I left Gabe’s questioning the nature of music itself.