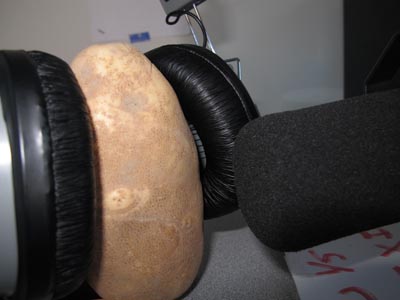 It’s been eleven years since Potato captivated a campus with his first run for University of Iowa Student Government President. He’s back to shake up the race again.

Potato sat down with KRUI for his first public interview of the campaign season.

KRUI: It’s great to see you again Potato, you’re looking well. How has the past decade treated you?

Potato: Thank you, it’s great to be back here. I’m feeling as well as I have in a long time. The last ten years have been a real learning experience for me. A lot of people know that I lost the 2001 election, but not many know the impact that it had on me. I’d been conditioned my whole life to expect to succeed, so when the results came in and I’d lost… [pauses]. I couldn’t deal with it. It was a total lack of maturity. I wound up leaving the University after my sophomore year, still quite far from earning a degree.

I traveled for a while, worked odd jobs. Prior to coming back here, I spent the past five years as a host at Chili’s in Terra Haute, Indiana. That was a pretty dark time for me, so finally I said ‘enough is enough’ and decided to come back to the University of Iowa. It’s proved to be one of the best decisions I’ve made in my life.

KRUI: You’ve been out of the public spotlight for over a decade, why make another run at UISG president?

Potato: In a lot of ways, this is about bringing my experience full circle. When I look back on the kid I was in 2001, I’m amazed that I thought I understood what people want and need. I truly believed that I understood the problems of the masses. I had no f*****g idea. [Laughs]. Back then it was all about, you know, fighting the power and throwing parties.

My experiences have made me realize that it’s not only exceptionally difficult to rage against the massive, tuition-raising machine, but that it’s a misuse of our energy. It’s much too easy for the student body to ignore the cancers growing within while it’s focusing on the evil “other” that’s robbing them blind. I think we have to look inward. We can’t collectively rise up and take care of our problems with the administration until we take care of ourselves.

I’m running to foster a greater sense of community at the University. We must continue to promote outreach and acceptance toward all minority groups on campus, but we also need to better reach out to what I like to call the “invisible minorities”. One in five college students have a diagnosable mental health condition, which include depression and anxiety disorders. Nearly one third of collegestudents meet the clinical definition of an “alcohol abuser”. Six percent of college students have alcohol dependency. These are the problems we need to deal with. How can we move forward as a University – as a society – if we’re leaving so many people behind?

Potato: No, not really. When I said those things I was young and angry, I was just looking for a fight. Now I see things a little more clearly. There have been countless healthy eating campaigns here at the UI that have been responsible for unspeakable atrocities against vegetables. I see potatoes just like me cut up and French fried every day. These things won’t end without increased awareness. I have come to accept that I must make the necessary changes myself through positive, proactive leadership.

KRUI: That’s a very brave thing to say, Potato. Getting back to this year’s race, have you sized up the competition at all?

Potato: I’ve taken a look at the folks who are running this year. I haven’t broken down their platforms with my team quite yet, but I expect they’ll both be very competitive.

KRUI: Do you think that your being a potato affects the way the voters will see you?

Potato: Of course. Absolutely. I’ve had to deal with being a potato my whole life, I know how people react. But, you know, it’s 2012. I hope that, at this point, people will be able to see past the fact that I’m a potato and judge me based on my vision for the future. The University’s a pretty open minded place,
so I’m not too worried about it.

KRUI: You’re getting into the race pretty late, how has that impacted your candidacy thus far?

Potato: It’s a challenge. I was basically peer-pressured into running by a couple of friends after the initial phase of the campaign was over, so I missed a few key deadlines. I’m still in the process of building that crucial name recognition, but I have a solid organization behind me. I’m not affiliated with an
established party at this point, I’m just me. Potato.

KRUI: There have been some rumors swirling about a possible running mate. I’ve heard the name Pear mentioned. Can you confirm?

Potato: We haven’t filled out the other half of the ticket just yet, but we have definitely taken a look at Pear. She’s an extremely qualified fruit. We’ve got the list down to just a few names; we’ll be making an announcement very soon.

KRUI: Last question. What happens if you win?

Potato: If I win? If I win, things get better.