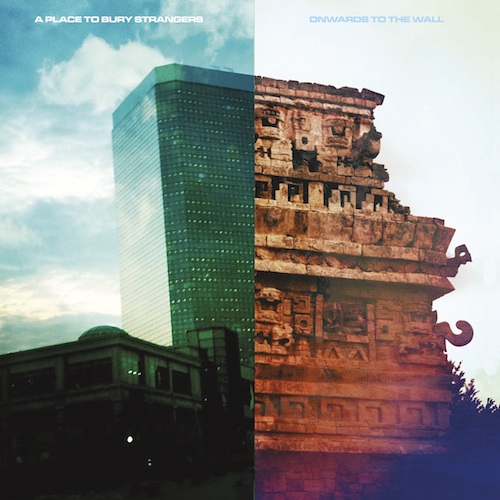 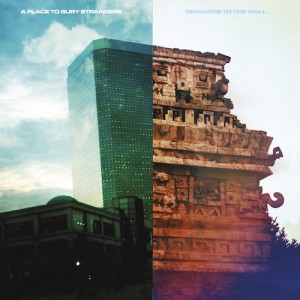 A Place To Bury Strangers’ eighth EP, Onwards To The Wall, is a fifteen minute maelstrom of industrial noise. Against a percussive backdrop of repetitive pummeling, distorted guitars ferociously wail and Oliver Ackermann croons of lost love in a manner so bleak it is almost deadpan. The result: a visceral unleashing of emotion that is both defiant and triumphant.

The EP is drenched with the band’s characteristic use of feedback and reverb, stemming from effect petals custom made by Ackermann. The innovative effects are tightly coiled to create five nuggets of post-punk inspired melodies wrapped in an industrial gothic cloak, foreboding dirges suitable for dancing. Listeners are hit hard with the opening track, “I Lost You”, in which Ackermann mourns his inability to forget a past lover amidst guitar sirens of angst eventually sputtering to an end. The second track, “So Far Away”, has an air of victory about it despite the depressing lyrics that ring of desperation (“I don’t want to die alone”).

Securely settled in a familiar lyrical motif that continues with the third track, synonymous to the EP title, fans of APTBS might perhaps be surprised to hear a new voice emerge from the looping drones. Alanna Nuala, aka Moon, duets with Ackermann by repeating verbatim his morose statements of miscommunication before the two embark on a new phrase together that subtly hints that they have come to terms with their estrangement. “Onwards To The Wall” is the softest track on the album, an apt opportunity for the listener to dwell in the band’s inherent pessimism, as there are no grinding guitar riffs to contradict the vocals.

Yet APTBS are at their best when they are spewing sonic carnage; in this respect, “Nothing Will Surprise Me” and “Drill It Up” do not disappoint. The last two tracks mark a change from distress to incensed defiance. Ackermann sings with more range and emotion in the penultimate track, while bassist Dion Lunadon, a less sullen and more brittle vocalist, steps to the forefront and bares his fury in “Drill It Up.” The guitar effects are textured in abrasive layers, permeated with mechanic blimps reminiscent of Nine Inch Nails. Songs such as these are what caused affectionate fans and reviewers to dub the Brooklyn trio “the loudest band in New York City.” If you tend to gravitate towards dark, catharsis-inducing music, keep this EP in mind, set for release February 7th.