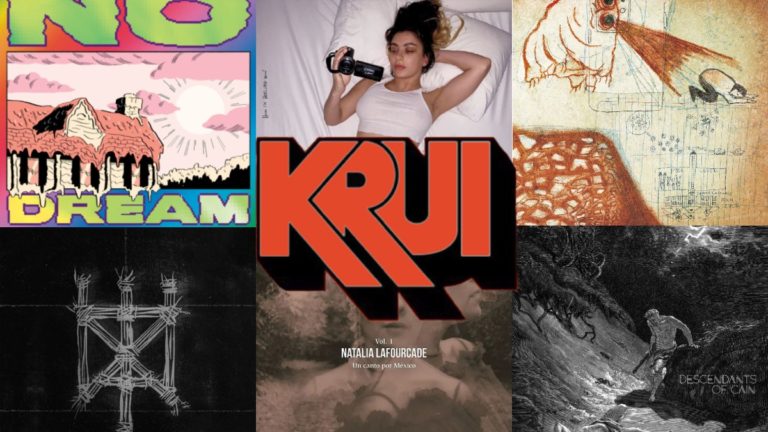 Throughout his career, though especially the last decade of it, Jeff Rosenstock has done more than possibly any artist to remove the stigma from pop-punk. His earworm melodies, impassioned shouts, and nervous energy consistently produce cathartic listening experiences. His newest effort, the surprise-release N O D R E A M, is no exception to this rule. Acting as a soundtrack to yet another anxious breakdown, songs respond to perceived personal inadequacies (“Old Crap”, “Beauty of Breathing”) and political helplessness (“Scram!”, “N O D R E A M”). While many tracks aren’t more than four minutes, most have a tremendous sense of pacing and dynamism, never wearing out a melodic or sonic idea before moving onto the next. The title track’s different musical phases cover a massive range. As a soft and simple guitar riff naturally develops into a pummeling barrage, Rosenstock decries the inherent violence of capitalism. Other highlights include the ridiculous “***BNB” or the surprisingly mature “Honeymoon Ashtray” where he describes a mediocre honeymoon experience and the rejected temptation to see it as a symbol for the marriage. The album is sometimes silly, usually poignant, and a lot of fun. So essentially, it’s more Jeff.

On how i’m feeling now, Charli XCX fully commits to the hyper-pop sounds of last year’s Charli, culminating in a near-perfect quarantine pop album. Since the release of 2016’s Vroom Vroom EP, a collaboration with acclaimed experimental electronic producer SOPHIE, Charli’s music has gradually strayed away from the Top-40 friendly sounds of early singles like “Boom Clap” and “Fancy”, instead seeking a more experimental and futuristic sound. How I’m Feeling Now executes this sound incredibly with a variety of high-energy, infectious pop songs laced with a mix of blown-out basslines and pristine electronic backdrops. Much of this album’s sound lends itself to its impressive lineup of producers, including PC Music founder A.G. Cook, Dylan Brady (100 Gecs), Palmistry, Tommy Cash, and Umru. Their cutting-edge production gives the entire album a truly futuristic feel with a vast pool of stylistic influences from modern trap and R&B to underground electronic, and most prominently, bubblegum bass. Songs like “pink diamond”, “claws”, and “forever” show Charli at her most experimental while also being some of her strongest songs yet. Over industrial synths and a pounding UK Grime beat in the opener “pink diamond”, Charli repeats “I just wanna go real hard” – and for the next 37 minutes, she goes pretty hard.

Deerhoof are back and as delightfully zany as ever. Hailing from San Francisco, the noise-pop group has been releasing albums consistently since the ’90s with each new release building on the band’s signature style of quirky and experimental production. Future Teenage Cave Artists is no exception, as it is riddled with dissonant guitar chords, unorthodox time signatures, and colorful instrumentation. But this time, each track bleeds with themes of apocalypse and emotional unrest. Transitioning smoothly between songs that are abrasive and disjointed (“‘Farewell’ Symphony”, “Zazeet”), to dissociative and ghostly (“Fraction Anthem”, “Reduced Guilt”, “I Call on Thee”), Deerhoof’s signature character shines through always, even as they delve into new sonic territories.

The looping cry of “Oh no, please God help me” on the opening track of Backxwash’s latest album sets the stage for what the listener is about to hear: aggressive bars with demonic themes over hard-hitting beats with dark twists. Beyond the horrific presentation—and often intertwined—is a deep reflective pain, as Backxwash grapples with difficult family relationships, the darker aspects of religion, and the world’s perception of her and her trans identity. The heavy subject matter is conveyed through witchy bangers, such as “Black Magic” with guitar from Ada Rook of Black Dresses, or “Amen” where she screams above choir vocals and heavy bass, raging against class disparity and fascism. Devi McCallion, the other member of Black Dresses, also appears on “Spells” to deliver an unsettling, yet captivating hook. This and the demonic screeching on the chorus, which rides the line between ridiculous and terrifying, plus Backxwash’s passionate delivery, make for one of the most memorable tracks on the album. Backxwash is a completely unique voice in rap, and both fans of left-field hip hop and traditional rap will likely find something to love on this record.

Best known for her contribution to the soundtrack for Disney’s Coco, but perhaps most hailed for her contributions to Mexican popular music, Natalia Lafourcade has become a staple in modern Latin American pop-rock and Mexican folk revivalism. Her latest album follows up her two-volume Musas, which were an exploration of traditional Mexican folk music, and a stylistic transition from her more poppy, commercially-successful Hasta La Raíz. Stylistically, Un Canto por Mexico is sort of a hybrid of those previous projects. Each track evokes the themes of pride, joy, struggle, and heartbreak that are characteristic of traditional Latin American folk. Some are renditions of classic huapango songs (“Cucurrucucu Paloma”, “El Balaju / Serenata Huasteca”), others are re-recordings of popular songs from Lafourcade’s earlier discography (“Hasta La Raíz”, “Ya No Vivo por Vivir”). On Un Canto por Mexico each track blends into a sonically consistent ode to national pride.

Continuing in a similar style to his previous albums, Ka’s new project is dense with wordplay and heavily descriptive of lived pain. Descendants of Cain is filled with biblical allusions, the primary one being Cain’s murder of Abel as an allegory for violence within oppressed communities. Each of Ka’s bars are filled with double entendres, to the point where full comprehension may take multiple revisits. He raps calmly in a cadence similar to spoken word, but there is a substantive weight to it all, and even when deploying quick multisyllabic flows the cleverness of his wordplay is never compromised. New listeners will note how scarce the drums are on many tracks, sometimes not appearing at all, allowing Ka to act as his own rhythm section. Some instrumental highlights are “Solitude of Enoch”, where rushes of sharp strings periodically encroach on the guitar and keys, and “PRAY”, an eerie track where the primary component of the beat seems to be monitor feedback. The choral vocals and acoustic guitar on “Old Justice” are a surprising choice that showcases Ka’s versatility, leading into the unusually tender and wholesome closing track, “I Love (Mimi, Moms, Kev)”. On Descendants of Cain, Ka further cements himself as a rapper without a single filler line.