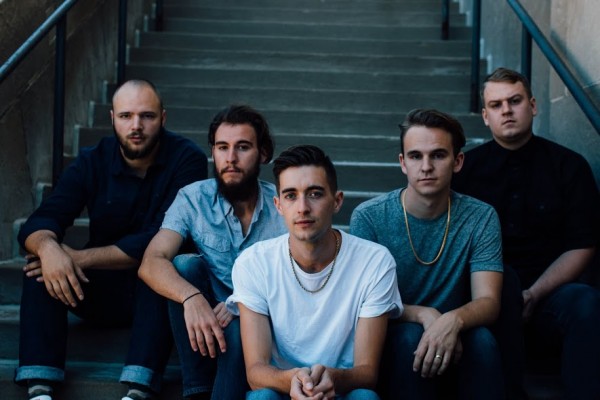 I sauntered into an Iowa City venue, the Mill, on a rainy Wednesday night, looking for a change in my daily routine of class, followed by a mediocre dinner and studying. Arriving at the venue early, early enough to see the entire opening act, Pink Neighbor (more on them coming from Elaine, but I must say I was quite impressed with their saxophonist and lead singer Katie). I found a good seat as more and more people poured into the stage seating area.

By the time Halfloves took the stage promptly at 8:30, it was standing room only by the bar, and rightfully so, as their approximately 45-minute set was thoroughly enjoyable and thought-provoking; a wonderful change from my usual Wednesday evening. I didn’t even mind so much my table being perpetually knocked into as listeners tried to get closer. They took the stage quietly in the dimming lights, prompting one member of the audience to yell “WE LOVE YOU!” perhaps unnecessarily.

Described in the Mission Creek lineup as “the best currently active rock band in Iowa” with a “emotionally charged sound,” the Iowa City native band, Halfloves, is composed of five male members, all of whom looked like they belonged in a band: a Canadian tuxedo, buttoned-up and collared cotton shirt, ripped light wash jeans … you get the picture.
The most notable member for me was the drummer who wore sunglasses throughout the entire set. A little bit of Radiohead, a little bit Imagine Dragons (both of whom share a producer), even some potential Hippo Campus or Foster the People mixed in there, Halfloves blends a unique sound of classic guitar and steady drum beats with pulsing synthesizers and hazy vocals, capturing and maintaining the audience’s ear.

Halfloves started playing with no formal introduction, letting the music speak for itself. Their initial sound was inviting and mellow, allowing me to picture them playing at a vibe-y music festival like Pitchfork in Chicago. Unfortunately, I found the lyrics a bit hard to understand at times, but what the band lacked in vocals they made up for in style and skill. I did make out some lyrics: “Even if it lays me to waste / Time and Time again / I still need a little taste” from their feature “A Little Lie” was a notable favorite. The guitars would build in time with the chorus in a satisfying way, crescendoing to meet the intensity of the song. Not everything they played possessed the same fervor as the first few songs, showcasing their versatility. It was also apparent they were enjoying themselves
— the guitarist was head-banging by the end of the set, his hair swaying in time with the music.

Before their last song, one of the members thanked the audience for coming and left us with this piece of advice, “Let the lounging abide.” A curious mix between lax and upbeat, Halfloves did not disappoint, exiting the stage with a lasting applause. I will definitely be checking out more from Halfloves, as new music is expected this fall.

Check out their music video for “Not too Keen” here.