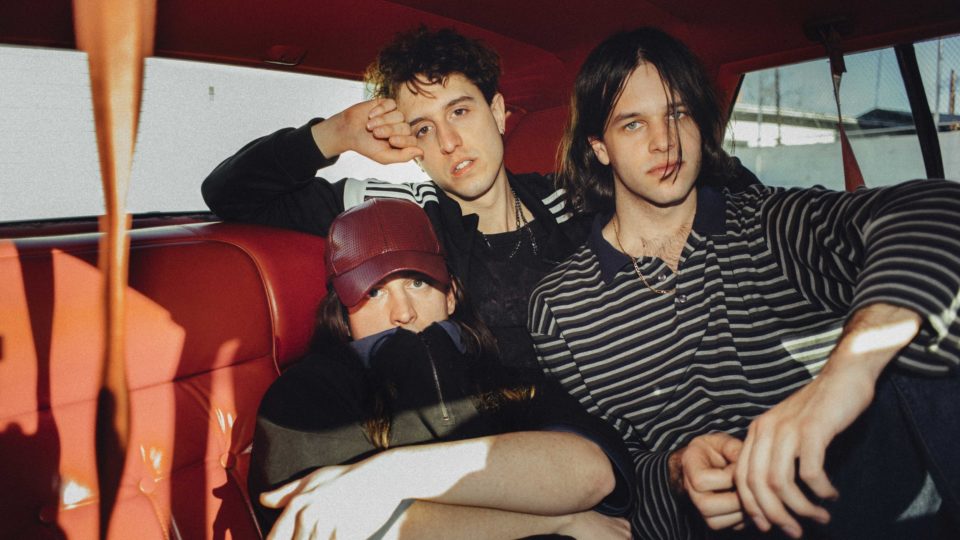 If you want to feel like you’re the star of a road trip montage, images flying by on the highway as you look dreamily out the window, then Beach Fossils is the band for you. Their soft dream pop music is easy to fall in love with from the first listen, lead singer Dustin Payseur’s voice drifting through the air like a crisp breeze through leaves. You’ll be able to feel this breeze yourself on October 20th when Beach Fossils headlines the first night of Witching Hour at Gabe’s in downtown Iowa City.

The Brooklyn-based band formed in 2009, but only one original member remains – lead singer, Dustin Payseur. This is ironic because the band began as a means to expand the solo project of Payseur, but quickly turned into an ensemble act. The three current band members are Payseur,

bassist Jack Doyle Smith, and guitarist Tommy Davidson. The band name itself doesn’t hold much meaning, as Payseur explained to Flavorwire – “Whenever I’m reading I make a list of words I like. Usually they’re words that aren’t as clear as Beach Fossils, but when you’re choosing a band name it needs to be something that people can remember. It’s kind of unfortunate because at the same time there was a lo-fi beach theme going on so we ended up getting lumped in with that. Now that’s phased out some maybe people will stop associating us with that genre.”

The genre that Beach Fossils wishes to reside in is experimental pop. Some consider them to be an Indie Rock band, and “Be Nothing” gives us a glimpse of this with a lengthy hand-banging instrumental. But other than a few songs, most of Beach Fossils music evokes a sway rather than a head bang. The band toys with many different instruments such as piano, flute, saxophone and harpsichord, and writes intimate, striking lyrics.

Their sound reminds me of the time between when I wake up and when I actually begin my day – the moments where I pull myself out from under the covers, sip a mug of coffee, tip-toe around in slippers, imagining what the day will hold. I think Beach Fossils is the perfect backdrop for this time of day – calming, comforting and contemplative.

Now’s the time to start listening to Beach Fossils, because every one of their warm, soothing songs is worth knowing. They released their third studio album, “Somersault”, in June of this year, and knocked it out of the park. “Somersault” is the first album that the band has released on Payseur and his wife Katie Garcia’s record label, Bayonet.

Unlike previous albums where Payseur took the reins in terms of songwriting, the band truly collaborated for this record, creating a cohesive sound. “Third times the charm” definitely applies here, as this third album surpasses the prior two. Beach Fossils just keep getting better.

Here are a few songs that you’ll want to hear before you attend the show:

“Saint Ivy” – this light-hearted track conjures up the image of someone prancing along a sidewalk with a dog leash in hand, meandering about a park in the sun. The entire second half of the song is purely instrumental, beginning with a lovely flute solo, followed by a merging of piano, guitar and strings that keep carrying you through that park.

“Rise” is a short 1:42 song featuring Cities Aviv giving a point-blank confession. The instrumentals behind his voice sound bluesy, placing us in a foggy basement bar – saxophones slink through the air like smoke clouds as Cities Aviv speaks from the heart.

“Tangerine” has a peculiar title and vibe. From the moment it begins, we are set in a dreamy state as Payseur extends lyrics into lullaby-like notes singing, “Our time together’s always blurry/After a while it’s all a story”. Rachel Goswell sings the chorus in a whispery alto that wraps us up in seductive blanket of tangerines.

Beach Fossils’ show at Gabe’s at 11pm is one that you don’t want to miss. Come check them out  on Friday, October 20th and envision yourself in that road-trip montage.