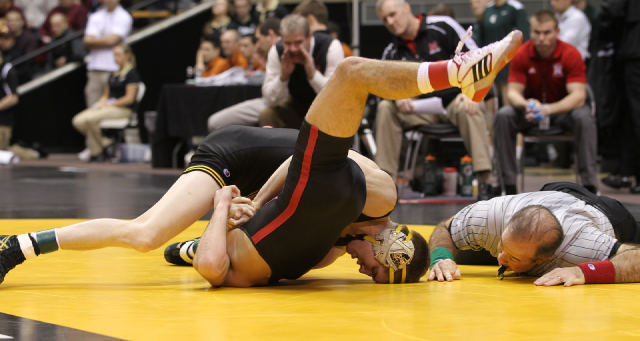 The Iowa Hawkeyes have 6 wrestlers in the championship bout tomorrow afternoon (McDonough, Ramos, Marion, St John, Evans, and Telford) and are in a very good position to take a commanding lead in the scoring. Minnesota has 5 wrestlers in the Championship, and Penn State has 3. Penn State has a great chance to score bonus points tomorrow with 5 wrestlers in consolation brackets, wrestling for 3rd place, with Minnesota and Iowa only having 4 and 2. The championship bouts will decide a great deal as to how the tournament results end up, but bonus scoring is always essential.


McDonough and Sanders have wrestled twice this year. Both times McDonough proved to be the better wrestler and beat Sanders handily. McDonough struggled in his semi-final match against Delgado and Sanders should be gunning for him. The Gophers and Hawkeyes both need a victory here to get off to a great start in the Championship round.

141
Finals Match: #1 Russell (MI) v. #3 Marion (Iowa)
Consolation/Wrestle-Back:
Bout 129: #6 Thomas (IL) dec. Nelson (PU) 13-9
Winner will Wrestle: #4 N. Dardanes (MN)
Bout 130: #5 Sueflohn (NE) dec. #8 Pearsoll (PSU) 5-3
Winner will Wrestle: #2 Stieber (OSU)
Kellen Russell seems unbeatable, but Montell Marion has incredible skills and talent and has proven that he can wrestle with anybody. This finals match should be a lot of fun to watch because Iowa will need to win this one in order to remain in the hunt.

197
Finals Match: #5 Gonzalez (IL) v. #2 Powless (IN)
Consolation/Wrestle-Back:
Bout 153: #6 Campolattano (OSU)M dec. #7 Nakashima (NE)
Winner will Wrestle: #8 Kissel (PU)
Bout 154: #1 S. Yohn (MN) dec. #4 Huntley 2-0
Winner will Wrestle: #3 McIntosh (PSU)
The most interesting match outside of the championship bout tomorrow for this class will be McIntosh and Yohn. Sonny Yohn had a disappointing start to the tournament, but he has come back with a vengeance and is trying to give his Gophers a fighting chance in the team race.

Continue to follow me on Twitter @KRUISports and @TX3Hawkman for all of your LIVE coverage of the 2012 B1G Wrestling Tournament at Mackey Arena in West Lafayette, Indiana.