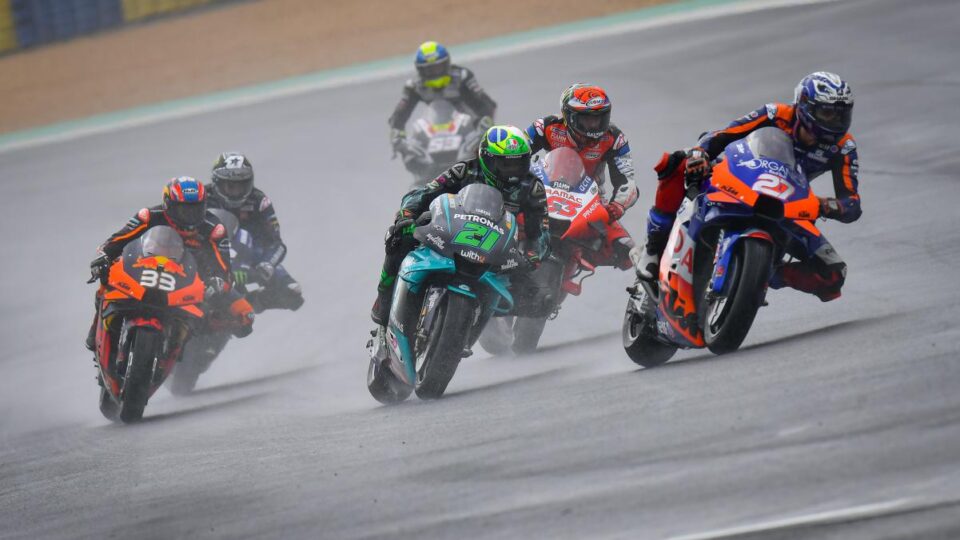 Anyone who’s ever watched the start of a MotoGP race is no stranger to the feeling of tension emanating from the grid. The limitless possibility of the race ahead, the pre-race rider rituals, the way the bikes look almost innocuous before the engines come to life. For a moment, the beginning of Sunday’s race seemed like any other. But that was before the clouds opened up over the pit lane and it became abundantly clear that we were in for an entirely unanticipated treat – a wet race. It’s a phrase fraught with peril in the road racing world, and for good reason. Even a hint of dampness under a bike hampers its grip on the asphalt and makes the already improbable corners of a racetrack practically impossible. Riders are forced to change to specially formulated wet tires, but even this top-of-the-line technology can only do so much to combat an environment that’s so openly hostile to motorcycle racing. For the first time in nearly two years we watched the fastest men in the world grapple with the stuff of nightmares, all with a championship on the line.

By the first turn, it was clear that any prior expectations were going to be as useless as a set of dry tires. Fabio Quartararo, after a triumphant pole position in front of a home crowd, quickly learned that his magic touch was water-soluble. He and his Yamaha compatriots struggled behind the punishing pace that Danilo Petrucci, Andrea Dovizioso, and Jack Miller set from the first corner. The Ducati men opened up a formidable gap in the first few laps, while the riders we’ve come to expect in podium contention – Mir, Viñales, Morbidelli – fell down the standings. A wet race is always a toss-up and this one did not disappoint, especially for Alex Rins. The Suzuki rider surged up from sixteenth place in qualifying, reeling in the leaders with both grace and aggression. For the trio in his sights, there was probably nothing more bone-chilling than the notification that flashed across their dashes during the ninth lap – #42 FOLLOWING. Rins is on the hunt.

But as cameras focused on the battle for third and a high-side from Bradley Smith, another rider was quietly turning out the fastest laps of the race. For the first time since Marc Marquez’s disastrous accident in Jerez, the neon orange of Repsol Honda gleamed in the rainy afternoon twilight and passed seasoned racers with ease. That’s right – Alex Marquez. As the other rookies and even sophomore riders grimly turned laps, he fought ruthlessly for his place among the veterans. Watching Marquez pass the world championship leader without hesitation would have been enough to silence the critics that have plagued his first year in the premiere class, but the race was only beginning.

In the eighteenth lap, the three leading Ducatis and Rins began to battle in earnest, clustering around each corner and losing valuable ground to Pol Espargaro and Marquez behind. Minutes later, Miller veered off course with his bike trailing smoke behind him, abandoning second for the pits with a race-ending mechanical problem. As rear tires across the circuit began to fail the race exploded into chaos. Rins slid off track during lap 20, scrambling to push his bike back into action without realizing that a strap of fabric had caught on the back of his bike during race marshals’ efforts to help. Petrucci took advantage of the battle for second between Dovizioso and Marquez to open up a 2.7 second gap, but he had only a few laps of respite before the Spaniard was in pursuit. Dovizioso could only focus on staying upright as his tires turned to taffy with every successive corner, and Espargaro was able to steal third place from under his nose. Bizarrely, the top three riders of the season were duking it out for ninth from 16 seconds back, a far cry from the high-stakes power struggle that viewers anticipated between Quartararo, Mir, and Viñales. Everywhere you looked, unlikely heroes were rising and the favorites were fading into the mist.

No matter who you were rooting for, it was impossible not to be delighted at the hodgepodge podium at Le Mans. Danilo Petrucci was beaming winningly from the top step in his first top-three finish since Catalunya, 2019, even after the news that his seat at factory Ducati is in its final weeks. Alex Marquez, advancing a stunning 17 places for his maiden MotoGP podium and Repsol Honda’s first of the year. Pol Espargaro, representing KTM after a series of DNFs spoiled his hopes for the championship. It was a weekend of redemption for riders that nearly everyone had written off weeks ago. There’s no sweeter surprise. We move to Aragon next week on the heels of the seventh different MotoGP champion in the season’s ten races and it looks like everyone’s got something to prove. Perhaps the Spanish air will be the key to dethroning the Frenchman who has led the season from the beginning, or maybe the sting of a mediocre finish at home will fuel a return to the podium. Or, if the rumors are to be believed, the sport’s genius-in-residence is planning a triumphant return just as his little brother gets his first taste of the spotlight. As always, the only certainty is the drama that awaits us. The world’s most exciting stage is set, its actors in the wings – who knows what will happen when the lights go out?