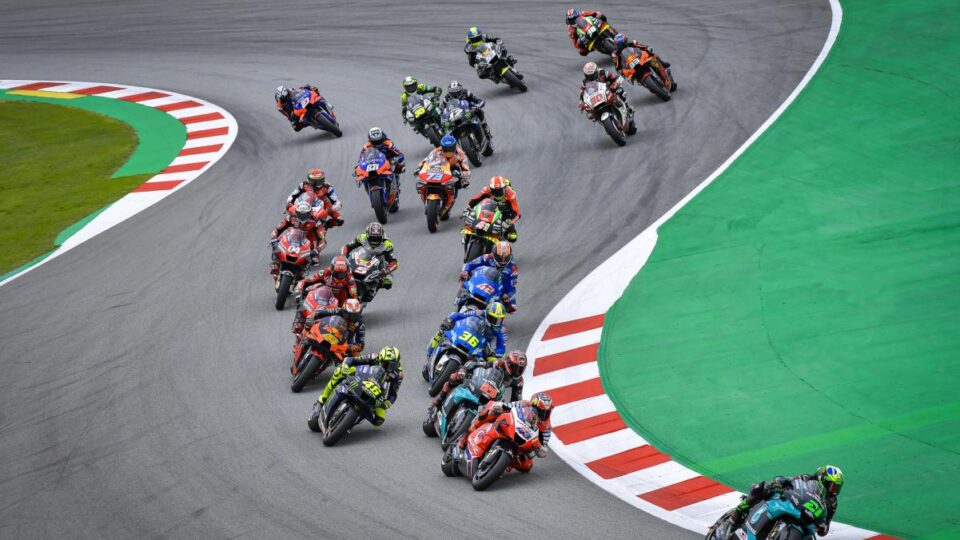 Here in Iowa City, we’re watching the leaves change as the world lazily slides into October. It’s all sunny skies and anticipatory sweater buying. But for the 22 men on the grid in Barcelona Sunday afternoon, the first hint of fall meant flirting with disaster. Track temperatures were the lowest they’ve been yet this season and most riders selected a pair of soft tires to carry them to their hopes of victory. We’re far gone from the blazing start of the season, where hard tires were the only way to survive on tracks that exceeded 50°C. On a cooler track, the improved grip of soft tires brings more control, but their tendency to fade fast after 10 or 15 laps means that riders who push hard at the beginning of the race can find themselves paying the price in the latter half.

Such fears vanish as the starting lights go out. Valentino Rossi’s start enabled him to challenge Franco Morbidelli from second after a phenomenal qualifying session. Andrea Dovizioso, the championship leader after the bloodbath in Misano, surged up from the sixth row of the grid to battle with Johann Zarco before Ducati-on-Ducati violence sent both spinning into the gravel off of turn one. Dovizioso initially pinned the blame on Zarco before storming into his trailer. However, an examination of the action revealed that it was actually Danilo Petrucci’s bike that twitched nervously within a tangle of riders diving headlong into the corner, sending Zarco into Dovizioso from the inside as he tried to avoid a crash. No matter the reason, the result was the same – Dovizioso slipping to fourth in the points standings only a few seconds into a critical GP.

Another championship contender, Maverick Viñales, also bade his hopes of a podium farewell early in the race. Last week’s victory from pole position gave fans hope of another strong showing, but as he crossed the line into the second lap he had lost over 10 places from his second-row qualifying position. Though he rallied to push his way into ninth 23 laps later, it was a disappointing race from a man who seemingly had it all figured out only a few days ago. Viñales should hope that his reign as a qualifying session savant continues because relying on his luck to move his way through a formidable field has only brought disappointment during this tumultuous 2020 season.

Fabio Quartararo, by contrast, hit his rhythm right at the very beginning. Edged into third by Rossi, he ducked into the slipstream and around the seasoned rider late in lap 5, eating into the lead held by Morbidelli. The ninth lap saw him passing his Patronus teammate and quickly opening up a gap. When Quartararo shoulders his way into the front of the line, there’s little anyone else can do but scramble for the remaining two steps on the podium. Left to their own devices, the top three riders quietly pulled away from the rest of the competition, but the action picked back up during lap 13. During the first turn, Morbidelli’s bike bucked wildly as a result of a fading back tire, and as he struggled to stay on circuit, Rossi dove for second with a 1.2 second lead. Moments later, Pol Espargaro slid out of the race during the same corner, forgoing any follow-up to his last-minute grab at third in Misano.

Elation was chased by heartbreak. Just as it seemed that Rossi would at last earn the 200th podium finish he’s been chasing since Jerez, he went down in the second turn of lap 16. Spectators had been informed of a change to the second engine map during lap 10, presumably electing for less power to conserve tire life while he was still able to hold onto second place. But he could only go so long on weakening tires and a cooling track. This marks the second race in a row with an abrupt and premature exit from the seasoned rider, not a good sign on the heels of signing with Petronas alongside Morbidelli for the 2021 season. Jack Miller and Francesco Bagnaia eagerly moved into fifth and sixth in his wake. The Ducatis benefited greatly from long accelerations down the start-finish stretch, flexing their beast of a motor until the tires could do no more.

And then there was Joan Mir. The Spaniard fought his way to another second-place finish in Barcelona, narrowly passing Morbidelli in lap 23. It’s starting to look like there’s nothing more exciting than Mir with a mediocre qualification because the way he carves up the field ahead of him is nothing short of astonishing. In all fairness, some of the credit for his string of successes also belongs to the bike he rides. The Suzukis have proven to be quick, deft machines that go gentle on the back tires, allowing for the breathless last-minute takeovers that Mir pulls off with such grace. Sacrificing qualifying speed for long-term success in forty-minute races has brought the Suzuki to somewhat unexpected heights. Alongside Mir was his teammate Alex Rins, following his lead to pass Morbidelli during the same lap. They granted us a Suzuki 2-3 finish that only materialized as other riders began to fade in the final minutes of the race. In fact, given another lap or two of the same uncompromising pace, Mir very well could have taken the lead from a flagging Quartararo. It’s tempting to hope that he rides more aggressively early on in the races to come, but at the same time, there’s a degree of comfort in watching a rider that chases the championship with patience and consistency.

This weekend, we’ll get to see how he approaches the challenge of making up the mere eight points that separate him and Quartararo. The French rider is coming into a home race in Le Mans as the reigning champion, on the anniversaries of his first premiere class podium in 2018 and his first win in 2019. Barcelona has been good to him, but his allergy to anything but the top step of the podium has sent him vacillating wildly between triumph and disappointment. Even the slightest misstep could hand Mir his maiden victory. For now, though, there’s nothing more to do than pack up the trailers and move on. When the engines snarl, when 22 riders tense over machines that accelerate them to the edge of human ability, when only inches separate the conquerors and the conquered – that’s when we’ll know who’s capable of snatching the mantle that 2020 has flung into contention time and time again. In the interim lies only anticipation.