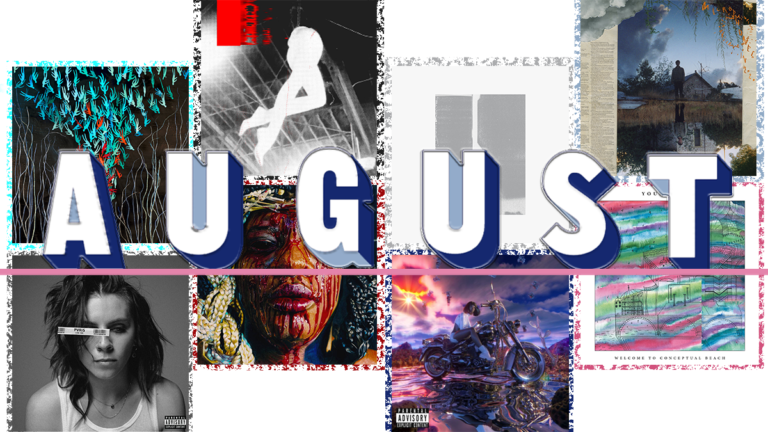 Young Jesus’ new album Welcome to Conceptual Beach is an ambitious and artful indie rock album that leaves behind much of the Midwest-emo sound of 2018’s Everything is Just There. It instead it favors more of a more progressive style of rock while pulling from a vast pool of influences. The album’s opener “Faith” combines jazzy rhythms and post-rock instrumentals with digital vocal effects, sounding something like a mix of Talk Talk and Bon Iver’s 22, a Million. Later in the track, vocalist John Rossiter uses a more soulful singing style similar to that of Jeff Buckley’s, one he sticks with for a good part of the album to great effect. “(Un)knowing” employs reverb-soaked glide guitar and ethereal female backing vocals that could have come directly off of My Bloody Valentine’s shoegaze masterpiece Loveless. My personal favorite track, “Meditations”, features improvised sections that balance a mellow sound with a free-flowing quality that gives the song plenty of life. The song’s progression brings to mind prog classics like Yes and King Crimson, complete with spacey synthesizers and fast, precise, complex drumming. Essentially every track on Welcome to Conceptual Beach takes a different approach to rock. While this may be a barrier-to-entry for some, much of the band’s ambition pays off, making for one of the more interesting indie/alternative rock releases this year.

Phil Elverum has been an indie staple since he began his career in the mid-90s, producing mixtapes that would later fall under the now infamous Microphones name. When he released The Glow pt. 2 in 2001, he forever cemented his blend of mellow indie palettes and droning, distorted rock as required listening for any alternative-loving music fan. Promptly after the 2003 follow-up to The Glow pt. 2, Elverum departed from the Microphones name to continue his musical career as Mount Eerie, only sporadically playing under the former, eponymous title. After nearly 19 years, Microphones in 2020 was released not so much as a return to the project, but as an open conversation about it and its creator’s winding past. The album is in actuality a 44-minute song, flowing through a number of stylistic switch-ups that encapsulate the varying degrees of the project’s musical influences. The continuous building and receding of the instrumentation lulls the audience into a sense of peace that is both disconcerting and comforting. Elverum softly ambles his way through the narrative of his life and career, sometimes unsure of his footing, sometimes blissfully confident. Lyrically, he incorporates themes from previous albums, hints at specific lines, and offers deeper insight into their personal origins. Even if the specificity of some details may go over listeners’ heads, the tide-like, droning instrumentation paired with Phil’s unrefined vocal delivery and lyrical honesty will still draw out an unabashed desire for inner peace and to know, as he sings, “the true state of all things…”.

On her new EP, Australian rapper Tkay Maidza pulls from a wide variety of styles and genres, and performs fantastically in each. Aside from her pen game and singing ability, what Last Year Was Weird Vol. 2 makes most clear to the listener is Maidza’s versatility. The opener, “My Flowers” begins with laid back guitar chords and a simple vocal line before giving way to drums, bass, and futuristic synths. Maidza lays out a chill flow as she considers her own worth, both personally and in the music industry. “24k” is a grooving hip house song with propulsive kicks. Above this dance beat, Maidza’s flows are effortless and cool. The chorus shows off the lighter side of her vocal register with airy inflections. Then of course, there are the bangers. “Shook” brings heavy bass throughout, with flashy synths on the chorus, plus energizing use of drum and vocal samples. Most memorable about the track is the last hook, where Maidza playfully works in a new melody for her rapped vocals to respond to. The off-kilter synth lines on “Awake” and “Grasshopper” are reminiscent of Tyler, the Creator’s production, and bring a darker tone to what is mostly an optimistic EP. With each song feeling so unique in the track list, there’s much more to prattle on about, like the cathartic silliness of “You Sad” or the chorus on the pop RnB tune “PB Jam” which may have the best melody on the project. Features from JPEGMAFIA and Kari Faux are also well executed. Last Year Was Weird Vol. 2 is an EP that knows the importance of having compelling songwriting at the center of each track.

Crisis Sigil’s new album small towns. is a weird, wonderful take on grindcore from Ada Rook (of Black Dresses). Crisis Sigil’s music is stylistically far-removed from the pop-oriented sounds of Black Dresses, but Ada’s production abilities still shine through to create a unique and personal style of digitized grind that could not have come from any other artist. Though packed with the same chaotic energy of long-running grind acts like Napalm Death and Pig Destroyer, small towns. is by no means strictly a grindcore album. Rook works in plenty of other styles like digital hardcore, metalcore, and industrial metal, providing the album with moments of mid-tempo riffing and melodic sections that break from the more pummeling conventions of grindcore. The closer “away.” shows off her genre-bending talents with harsh vocals, distorted guitar riffs and drum machines brilliantly produced into an extreme techno-cybergrind hybrid, like a dance track pulled from your worst (or best?) nightmare. The title track delivers incredibly heavy grind that unexpectedly shifts into electronic synth sections and even some spoken word poetry. Listening to the album several times over I couldn’t get enough of the chaotic shifts between all-out aggression and emotional tenderness. At just eight tracks running one-to-two minutes each, Ada Rook manages to keep the short-and-not-so-sweet energy of grindcore while still finding plenty of room to work in her own unique sound.

Once again, PVRIS’s new album, Use Me, succeeds in demonstrating their ability to go out of their comfort zone. After switching labels and hiring JT Daly to produce, the band stated these changes signified a new era of music that was clearly present on the album. Tracks like “Old Wounds” and “Death of Me” stay within PVRIS’s alternative genre but hint at a new, poppier sound. These tracks feature a dark mix of guitars, drums, synth, and vocals that increase intensity as the song builds. PVRIS’s new laidback pop sound shines in “Loveless” and “January Rain.” The stripped instrumentals give room to highlight Lynn Gunn’s raw lyrics. Gunn is the creative mind of the band, and this third album allows her to fully step into the spotlight. Lyrically, Use Me takes a more personal tone portraying Gunn’s struggle with depression, damaged vocal cords, and a breakup. Despite some simple instrumental lines, the honest lyrics make the album stand out and resonate with listeners. The darker sound of the band is still present but now coexists with a new brightness emphasizing PVRIS’s evolution.

Arriving hot on the heels of her breakout album God Has Nothing to Do with This Leave Him Out of It, rap firebrand Backxwash’s STIGMATA EP is a solid expansion, carrying forward the bleak, anguished lyricism and use of Christian themes as its predecessor. More than just cut content from the previous entry, however, STIGMATA kindles its energy by piling on layers of distortion and string shreds to deliver a hard-hitting, vengeful sound. The titular opening track immediately distinguishes itself with the addition of some sizzling metal samples that mirror a darker progression into the artist’s own psyche–as if the inner rage that fueled God Has... belied only a greater and hotter rage. Biting, punchy vocals throughout and a catchy hook easily make this a highlight that’s hard not to keep on repeat. “Demons” makes use of slower riffs and noise to transition into a more unsettling tone, highlighting the hauntingly distorted guest vocals from Devi McCallion. The EP kicks into a more traditional beat with “PSALMS 23.” The sonic space here allows Backxwash to lay it all out on the table with some utterly scathing lyrics, culminating in her brilliantly harrowing signoff with a claustrophobic burst of noise reminiscent of the exact sort of mental break alluded to throughout the project. Eerie samples and a rolling buzz in the instrumental closing track carry a subdued yet intimidating ambiance that seems to threaten, rather than hint, at more to come.

Bright Eyes – Down in the Weeds Where the World Once Was

It seems as if indie rockers Conor Oberst, Mike Mogis, and Nate Walcott of Bright Eyes knew when their fans needed them the most. After a nine-year hiatus, Bright Eyes released their ninth album, Down in the Weeds, Where the World Once Was. As a band that never fully stuck to one genre or sound between releases, fans were unsure of what to expect with this long awaited—some may even say overdue—release. On early listens, the singles (Persona Non Grata, Forced Convalescence, Mariana Trench) sound like songs that had already existed in the Bright Eyes catalogue—not intrusive, but not necessarily staking their claim either. However, the full release pulls these tear-stained pieces together and wraps them nicely into a cohesive, enjoyable album. Lead singer Oberst is back in full force with the ceaseless, quivering, and honest voice he has become known for. The instrumental and melodic palette isn’t far from a typical Bright Eyes album, though with consistently cleaner production. The lyrics are raw, though soft imagery floats through the album, with occasional flickers of twisted optimism that cut through the somberness. In the song “Dance and Sing”, Oberst sings ”all I can do is just dance on through, and sing”, which right now, hits a bit close to home.

EXD archives recordings from 1997-1998 by the legendary Japanese noise artist Masami Akita a.k.a. Merzbow. The album, released on Lawrence English’s label Room40 is comprised of drum machine creations far more rhythm-based than most of Merzbow’s more brutalizing “wall of noise” releases from this era, like the infamous Pulse Demon. On EXD, white noise and distortion overwhelm repeated drum patterns to create oddly hypnotic and intense static-soaked beats. Each beat is heavily mutilated and twisted into a sonic endurance test that pushes raw texture through feedback, often drowning out drum loops into little more than safety handles for the listener to grasp in the back of their mind. The title track even incorporates a mix of dance and hip-hop oriented beats which are met with waves of feedback, like some monster of DJ Shadow, clipping., and Throbbing Gristle patched together with tangles of exposed wire. Merzbow’s relentless treatment of the drum machine manages to create a sound that could send the average metalhead clamping their ears. As unapproachable as this may sound, this album (and countless noise records like it) sends a powerful artistic statement: that any sound is fair game in the world of art, and the palette for “musical sounds” extends endlessly beyond those of conventional instruments. Even those least forgiving on the ears can be used in incredibly dynamic ways as tools of musical expression – Merzbow’s music takes this to the extreme, and EXD is certainly no exception.