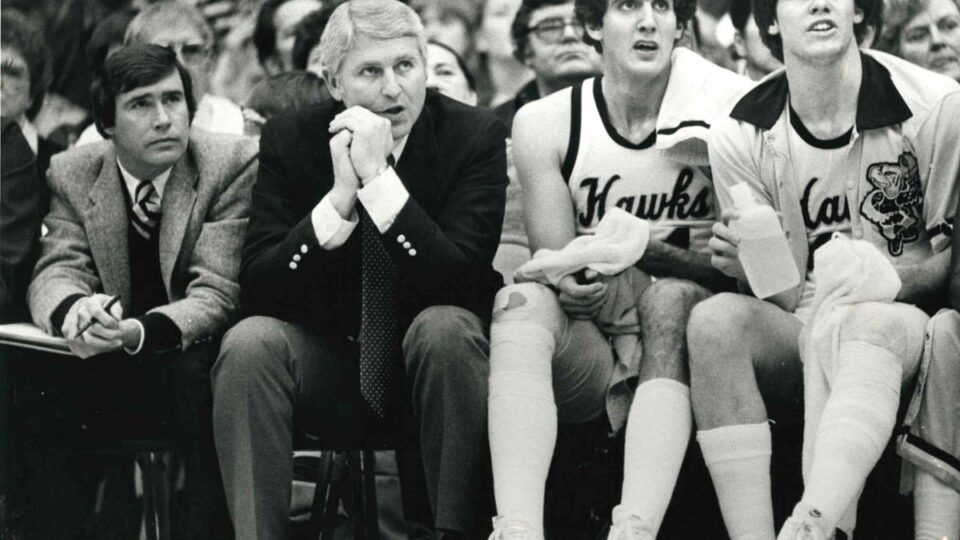 The late 1970s into the early 1980s was a whirlwind for Iowa Hawkeye athletics. Iowa Wrestling was in the midst of becoming one of the greatest sports dynasties of the 20th century, Hayden Fry had begun raising Iowa football from the ashes of irrelevancy, and a spunky, young coach from Long Beach State had just taken over Iowa men’s basketball.

Lute Olson grew up in the rural countryside of North Dakota where he became a star high school guard in basketball and eventually would play out his college days at Augsburg University in Minneapolis. Following his playing days, Olson spent over a decade in the high school coaching scene in Minnesota and Southern California.

Olson broke into the college ranks in 1969 when he was named head coach of Long Beach City College. At 35 years old and 5 children with his wife, Bobbi, Olson felt it was the right time to make the jump from high school to college coaching.

His success at the JUCO level prompted neighboring Long Beach State at the Division I level to offer Olson the great Jerry Tarkinian’s former position (who had recently left to become head coach of the Runnin’ Rebels of UNLV). His one season as coach of the Beach brought a 24-2 record, but no postseason due to NCAA violations from the Tarkinian-era.

In the spring of 1974, Olson shocked many in the college basketball world by bucking Long Beach State for an Iowa program that had fallen on hard times just five years after winning a Big Ten championship under Ralph Miller.

“People didn’t go from Long Beach to Iowa, they went from Iowa to Long Beach,” Olson told the Iowa City Press-Citizen in 2015. “I thought, ‘well I’m just going to break that trend.’ I saw an opportunity.”

By his second season at the helm in Iowa City, he gave the Hawkeyes a winning record. Three years later, he brought Iowa a share of the Big Ten Championship with Gene Keady’s Purdue Boilermakers, and Magic Johnson’s eventual national champion Michigan State Spartans.

It was the following season, however, that is still talked about today by the Iowa faithful.

The winter of 1980 saw Iowa have an up-and-down Big Ten season with star point guard Ronnie Lester dealing with a recurring knee injury. By the time the NCAA Tournament rolled around, Lester was fully-healthy and ready to carry the load.

Iowa’s run to the 1980 Final Four saw them knock off Norm Sloan’s NC State Wolfpack, Jim Boeheim’s Syracuse Orange, and John Thompson’s Georgetown Hoyas in the Elite Eight. Everything seemed set up for Iowa to go on and win the 1979-80 NCAA Championship.

But in a horrible twist of luck and fate, Ronnie Lester re-injured his knee in the semifinal game against Denny Crum’s Louisville Cardinals and Iowa would go on to lose that game, as well as the consolation game with the Purdue Boilermakers.

That season is what helped Lute create a “monster” according to his late wife of 47 years, Bobbi, who died of ovarian cancer in 2001.

Expectations for Iowa basketball grew by leaps and bounds by each passing season, eventually wearing thin on Olson himself. His final campaign in 1983 saw the opening of the new Carver-Hawkeye Arena and the Hawkeyes return to the Sweet Sixteen, only to fall short to Rollie Massimino’s Villanova Wildcats by a single point.

Soon thereafter Olson accepted the head coaching job for the Arizona Wildcats, a perennial Pac-10 doormat at the time of his arrival.

It wouldn’t take long for Olson to find success in the desert. By year two, he had the Wildcats in the NCAA Tournament. The following year, they were Pac-10 Champions. Olson would also mold dozens of future NBA stars, such as Steve Kerr, Damon Stoudamire, Mike Bibby, Jason Terry, Sean Elliot, Gilbert Arenas, Richard Jefferson, Andre Iguodala, and Channing Frye.

After winning 15 combined Pac-10 regular season and conference titles, as well as the 1997 national championship, Olson retired as head coach at Arizona on October 23, 2008 due to health issues.

In his retirement, Olson made numerous trips back to Iowa City in support of Fran McCaffery and the Iowa men’s basketball program. Many times his trips were in support of former player Kenny Arnold, a member of the 1980 Final Four team who had been fighting brain cancer since 1985 until his death in 2019.

From someone who never saw a minute of Iowa basketball under Olson, I believe he was the man who brought Iowa into the modern age of college basketball.

His 1980 Final Four team still has an impact on the program and the state to this day. 40 years later, those who watched Ronnie Lester, Kenny Arnold, Bobby Hansen, Steve Waite, Steve Krafcisin and the others, still talk about them like they are superheroes.

If it weren’t for Lute Olson, the state might not have these superheroes to talk about, and Iowa basketball wouldn’t look nearly the same without his legacy.