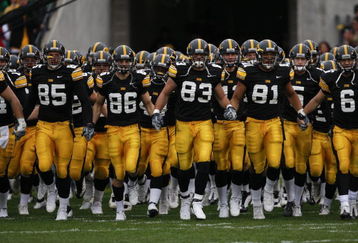 Growing up in the state of Iowa and a follower of the Iowa football program, never in my wildest imaginations would we be sitting here today having the conversation that has run rampant across the state on this Saturday.

The Iowa football program has alleged issues with racial disparities.

Maybe that’s me being a naive, 21-year old kid. Maybe it’s because I believed that all faculty of the University of Iowa champion themselves on equality (Which almost all absolutely do so). Maybe it’s because as a child and a teenager, the Iowa football program was seen as the gold standard in terms of growing young boys into grown men.

Whatever caused my belief in the program being above what has happened, it was disproved and shattered on Friday night. Allegations came forth that many African-American athletes were the target of racially insensitive comments at the hands of strength and conditioning coach Chris Doyle, who was one of Kirk Ferentz’s first hires in the winter of 1998-1999.

Many former African-American athletes, such as James Daniels, Mike Daniels, Jaleel Johnson, Amani Hooker and various others expressed concern about their experiences with Coach Doyle within the program.

One of the concerns included being “difficult for black players to walk around the facility and be themselves”. Quite a few concerns arose about comments allegedly made by Doyle that centered around “putting black players back on the street”.

Most of the allegations came out Friday night. Before the end of the night, Kirk Ferentz released a statement on the issues brought up on social media. By early Saturday evening, Chris Doyle was placed on paid administrative leave, announced by Ferentz in a video released on the football team’s Twitter account.

In the past 24 hours, support has poured in near and far from those that played in the Iowa program over the past 20 years. Outside a faction of people that any story of this subject is going to attract, the way this story has unfolded has spotlighted what is good about conversations involving racism.

There has been great dialogue between players, media and fans about each player’s alleged incidents. Players have provided great detail about their respective incidents, rather than remaining vague and bringing on a “mob mentality”.

In the point-of-view of this 21-year old, it seems everything is driven by where your allegiances lie. Whether the allegiance is in politics, faith, fandom, etc., people don’t think for themselves as much as they should.

What has unfolded in our country the last week and a half has caused me to rethink whether I truly believe in something or I believe in it because that’s what my allegiance tells me to believe.

What’s come out of Iowa City over the past 24 hours is disappointing to see as a normal human being, no matter what you believe in.

I was raised in a lily-white small town a half-hour north of Des Moines. I rarely came into frequent contact with African-Americans before I arrived at the University of Iowa. I was raised to treat everyone as you wanted to be treated, regardless of what they looked like.

I will never be the target of serious racial prejudice and inequality as a white male. But, I’ve learned throughout this experience that listening is more powerful than any spoken word could ever be when it comes to the issue of racism.

The greatest lesson I learned about listening came from (of all places) an interview with heavy metal artist Marilyn Manson in reference to his alleged indirect role with the Columbine High School shooters.

When asked in an interview what he would say to the perpetrators of the massacre. Manson replied, “I wouldn’t say a word, I’d listen to what they had to say, and that’s what no one did”.

The best thing anyone can do today, tomorrow and however long it takes to address these issues in our country, is to listen. What has happened within the Iowa football program is no exception to this.

Listen to what these athletes have to say, maybe it could help you grow too.