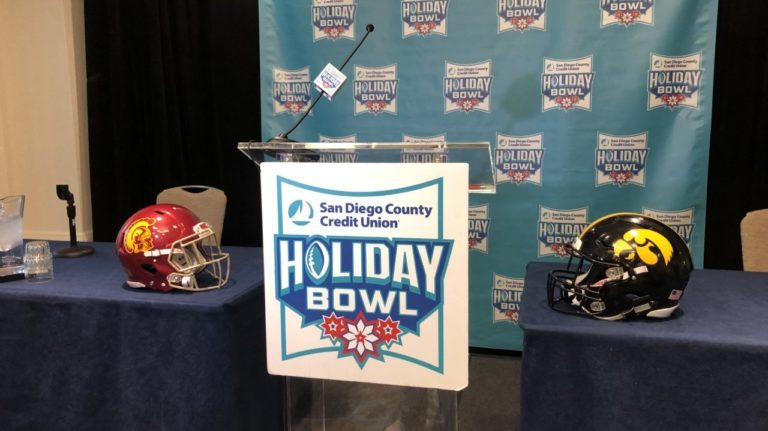 A months-worth of rhetoric continued in San Diego at the coaches press conference today with USC’s Clay Helton and Iowa’s Kirk Ferentz. Each coach stated how much fun San Diego has been, but both are clearly ready to take the field Friday night at SDCCU Stadium.

“We have the opportunity to play a great University of Iowa team tomorrow in front of the City of San Diego,” Helton said. “Both fan bases, going to be a great crowd and will be a great experience. It’s been great week of preparation for our football team.”

For Kirk Ferentz, this is trip #1 to the Holiday Bowl as a head coach, but he does have fond memories of his trips to San Diego while an assistant under the late Hayden Fry.

” I have personal experience going back 32 years ago as an assistant. We were here in ’86, ’87, had just an unbelievable experience and it’s even better now,” Ferentz said. “San Diego is a town that’s certainly changed a great deal, but one thing that hasn’t is the hospitality extended by all the Red Coats and everybody associated with the Bowl .”

Perhaps the most anticipated match-up in Saturday’s game will be the stout Iowa defense against USC’s revamped offense under first-year offensive coordinator and former Texas Tech star quarterback Graham Harrell. Harrell has tutored freshman Kedon Slovis and made him a sensation in Los Angeles.

Clay Helton did have high praise when asked about the Iowa defense.

” It’s one of the best defensive fronts we’ve faced all year, and I think they do a great job on first and second down efficiency. They are so well-coached. You don’t see them missing assignments or getting out of gaps and if they get you in third-and-long, they are elite,” Helton said.

“I truly believe their pass rush on third down allows them to play advantage coverages because they can rush four and get to you, and that’s always a deterrent for offenses.”

Iowa’s pass rush has been effective once again this year, registering 29 sacks in 2019 and has recorded a sack in an FBS-high 54 consecutive games per Chad Liestikow of the Des Moines Register.

On the flip side, USC’s offense is likely the most dynamic that Iowa has faced all season, with Slovis at quarterback and Biletnikoff Award finalist Michael Pittman Jr. at wide receiver.

“That’s going to be a starting point but hard to find any position on the roster where they don’t have guys that are very active and very talented and very dangerous.”

No injuries are appearing to hamper Iowa and Kirk Ferentz expects Brandon Smith to be a full go Friday night. Clay Helton announced that running back Markese Stepp will miss the game and starting right tackle Drew Richmond is “50/50” as of now.

Kickoff for the 42nd SDCCU Holiday Bowl will be at 7 P.M. CST and televised on FS1. KRUI Radio will have play-by-play action of the game online at mixlr.com/kruifm/ with pregame coverage beginning at 6:40 P.M.