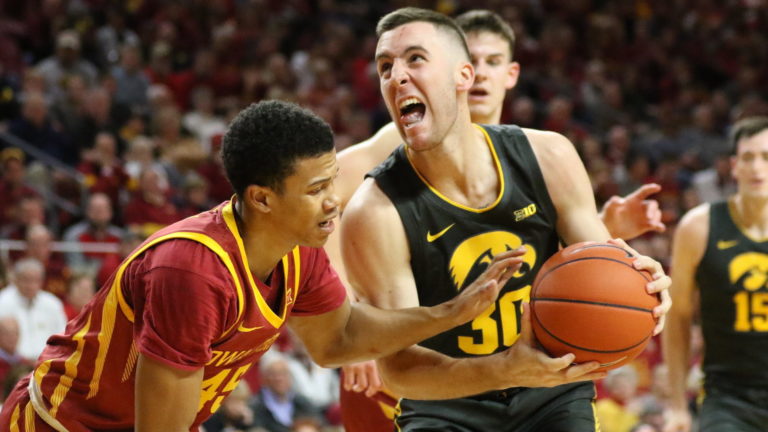 It had been 16 years since Iowa had last won at Hilton Coliseum against in-state rival Iowa State, and that win came in the 2003 NIT. The last time Iowa won a regular season Cy-Hawk game was in 2001, when the coaching matchup was Steve Alford against Larry Eustachy.

That all changed on Thursday night in front of a capacity Hilton crowd.

“It was probably the one game on my schedule I had as a must-win for us,” said sophomore guard Joe Wieskamp. “Obviously it was a big win and we were very happy about it.”

Wieskamp was one of five Hawkeyes to finish the game with double-digits in scoring, as center Luka Garza again lead the way in scoring with 21 points. Garza was also one of six Hawkeyes to hit a three-pointer as well.

“We came out really hot, we started out four-for-five and then we were four-for-12 or something like that,” Garza said. “We started missing, but we continued to get stops and play defense and that’s what kept growing our lead.”

For the second game in a row, Iowa’s defense did step up to the challenge, as Iowa State only shot 6-26 from the three-point line. While the Cyclone star guard Tyrese Halliburton finished with 22 points, Solomon Young was the only other Cyclone to finish in double-figures.

Iowa led 39-24 going into the halftime break, but it appeared that old ghosts were ready to cut the Hawkeyes in half. Iowa State opened the second half with a 13-5 run that sent the Hilton crowd into a frenzy.

The Hawkeyes promptly responded with a Connor McCaffery three and a Joe Wieskamp and-one to extend the lead back to 12. It was a sequence not many Iowa teams have put together before.

“I think it’s showing we’re maturing, we have a lot of veteran guys and we gave them some uncharacteristic and-ones,” said Connor McCaffery. “But I hit a three, Jordan [Bohannon] hit a three, Wieskamp had an and-one, Luka got a bucket. We just kept scoring.”

Father Fran McCaffery shared a sentiment similar to his son.

“We stayed the course, they’re [Iowa State] quick, they were up into us defensively and they were competing,” Fran McCaffery said. “The important thing for us to do at that point was move the ball side-to-side, find somebody who’s open, and some people make shots.”

Iowa and Iowa State played this game relatively free of any noticeable incidents, unlike last years game in Iowa City. However, it wouldn’t have been a normal Cy-Hawk game without some trash talk.

“That’s what make rivalry’s fun, Georges Niang blowing kisses to the crowd at Iowa, you can go on and on,” Bohannon said. “It was all in good fun.”

Bohannon also made another statement, by signing his shoes and setting them down on the court after the final buzzer had sounded. Ryan Kreiner gave the back story.

“Our freshman year, Monte Morris was talking a lot about how he was gonna leave his shoes at half court and he had special shoes for it,” Kreiner said. “I guess Jordan thought it would be pretty funny to return the favor.”

The win was Iowa’s 46th all-time win against Iowa State and their third win in the last four years over the Cyclones.

Iowa gets nine days of rest before traveling to Chicago take face Cincinnati in the Chicago Legends Classic at the United Center.