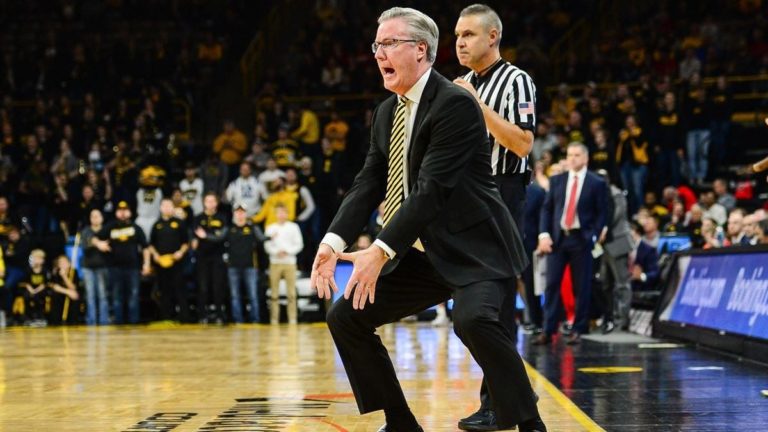 DePaul jumped out to a 19-2 lead and never looked back as an electric offense downed the outgunned Iowa Hawkeyes, 93-78.

Junior forward, Paul Reed, led the line with a double-double, gathering 25 points and 12 boards on 10-of-14 shooting. The 6-foot-9 Blue Demons frontman buried three of his four attempts from deep, setting the tone for a white-hot shooting display for DePaul. The Blue Demons, whose last out-of-conference road win over a power-six basketball school came against Northwestern in December of 2013, started five-for-six from beyond the three-point line and finished the evening with an 11-for-20 clip.

“They got in our space and hit us in the mouth early,” freshman guard CJ Fredrick said. “We let them get confident and let them hit open threes.” Frederick finished with a team-high 16 points, shooting five-for-seven from the field.

The Hawkeyes committed 21 turnovers in a contest in which they never led and, frankly, never looked close. With just under a minute left in the first half, guard Jalen Coleman-Lands sank a three-pointer to give DePaul its largest lead of the night – a staggering 25 points. The senior finished with 17 points and bombed a team-high four three-pointers in the contest.

“[DePaul] is long and athletic and filled with guys who can score,” Iowa head coach Fran McCaffery said. “We tried to settle them down with a timeout, maybe we should have taken it a bit sooner.”

DePaul has finished dead last in the Big East three years in a row and has not finished in the top half since 2007. Soundly defeating an Iowa team in such dominating fashion says far more about the progress of the Blue Demons program than it could about the failures of the Hawkeyes’ trajectory. However, Iowa will need to assess its faults quickly and fill a Tyler Cook-sized hole on both sides of the floor.

“We got timid and tense,” guard Joe Wieskamp said. “Once we played a good, aggressive team, we got uptight. We have to use this as motivation.” The typically pure-scoring sophomore had an off-color outing, netting just four points on a one-for-seven shooting performance.

“[Wieskamp] didn’t have a good game,” McCaffery said. “He knows that. He has to be one of the guys that’s confident to go and make plays.”

In a continuing storyline of the unfolding Iowa season, senior guard Jordan Bohannon once again saw limited minutes while dealing with the effects of his hip surgery. Once thought to be out for the entire season, the Marion native has played in both of the Hawks’ opening games off the bench. He was quiet in just over 16 minutes of game time with three points and two turnovers.

“It’s one game,” McCaffery said. “The critical thing is to not blame yourself or others. You have to take collective responsibility as a team.”

In a game where many fans may blame the referees – there were 41 fouls called in what became a greater than two-hour affair – the focus must be on the collective lapse to open the game. The Hawkeyes were outscored 19-2 in a five-minute span, a margin that became 40-16 just 10 minutes later. DePaul not only had open shots along with the hot hand, Iowa was bullied in the half court to the tune of 34-percent shooting at halftime.

The Hawkeyes attempted to claw back into the game, but couldn’t spark a run until it was far too late. In fact, the 15-point margin of defeat is quite gracious, as Iowa managed its longest run of seven points with just two minutes left in the contest.

Iowa must pick up the pieces, hosting three lackluster programs in the next two weeks before it takes a trip to Las Vegas to face the 2019 runner-up, Texas Tech. Last year’s undefeated run through the non-conference is long gone and there will need to be much improvement in terms of offensive efficiency and explosiveness if the Hawks want to get to Big Ten play without too much damage.

As for now, it’s back to work for the Hawkeyes. All is not lost.