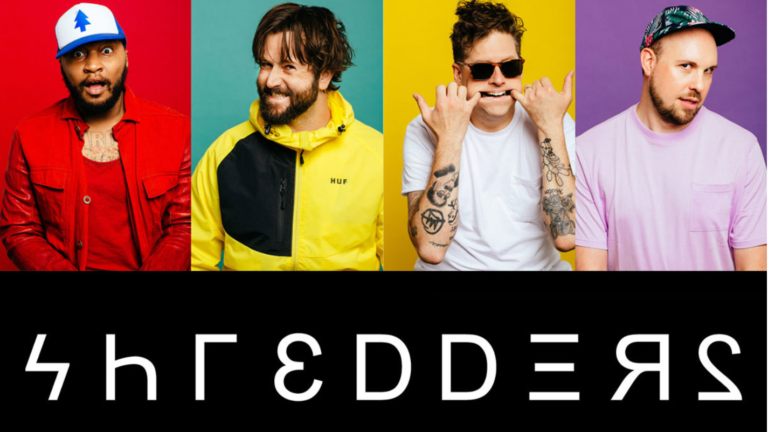 Going into this show, I wasn’t sure what to expect aurally or visually. Never having heard a song by the Shredders and only having heard a song or two from the individual artists that comprise the group (P.O.S, Sims, Lazerbeak, and Paper Tiger). I was going in with a fresh and unbiased perspective. Normally I like to have at least somewhat of an understanding of what the most popular songs/albums/EP’s of an artist are before going into their show. However, with the Witching Hour preview describing their music as, “…dizzying wordplay and anthemic hooks over an unrelenting, uptempo soundtrack…”, I figured that going into such an energy-bound performance blind might not be such a bad idea. I wanted to experience the music more so than eagerly anticipate the sounds and lyrics I had previously listened to.

Before I get into how the Shredders killed it on stage, though, I have to talk about the opening act. Carrier Waves headlined the night with a mesmerizing, hallucinatory, but ultimately engaging performance. Right from the moment you stepped off the stairs to get up into the venue, you were greeted with a mish-mash of colors slowly bouncing around a projector in the back of the room. There was nothing on stage but a small table with a computer and a MIDI pad, as well as two people dressed in all black. Everything was covered in plastic wrap, making the stage look more like a quarantine than anything. The actual performance started when the music buzzed in. The room filled with a very bass-heavy trance, slowly and methodically undulating in tone. The two performers began to creep across the stage and as they moved, the vivid blobs behind them on the projector did as well. There was a camera on the front of the stage running an image processor, relaying its output to the projector. The dancers were immensely graceful with their movement. Deciding to forgo physics, their flesh and bone became liquid. The clarity of the images in the background increased as the dance continued, resulting in ominous, faceless figures gliding across the screen. Then, it was over. My only gripe was the duration of the act; I thought it could have ended earlier than it did while still having the same impact. Nevertheless, it was cool to see a multi-media art piece in a format you wouldn’t expect.

Once Shredders took the stage, they threw their energy into the sea of people that stood before them and never looked back. Getting everyone involved seemed like second nature for P.O.S and Sims, as they had the crowd chanting, “I destroy!” off their song “Vanilla ISIS”, as if we had previously practiced a call-and-repeat with them. The tail-end of this song transitioned seamlessly into the next, which was marked by a blaring siren that followed the resulting beat to a T. After this, they used a mic check to burst onto the edge of the stage for their next song. Planned or not, I enjoyed the theatrics.

Shredders doesn’t shy away from the political realm. Akin to Rage Against The Machine, a lot of their music is class conscious, recognizing the fight of the everyday worker against “The Man”. Even the production surrounding the music reflects this. They employ a lot of EDM-inspired beats, which feature sections that hit you hard with heavy bass and other parts that build-up to an exciting climax with a mechanical droning. All of these characteristics in tandem give off a very industrial, post-modern feel. This was on full display when they performed their single “Ayeyayaya“. The robotic beat paired with the political messages (one of the heavily repeated lines was, “This machine kills fascists”, a reference to a sticker Woody Guthrie put on his guitar while performing back in the 1940’s) made me feel like I was in some cyberpunk dystopia getting ready to revolt. Despite the occasionally existential verse, their stage presence was extremely lively. They were constantly hyping up the crowd and interacting with each other on stage, giving us a peek into their band dynamics.

One of the best parts about the show was how positive and uplifting it was. They were constantly trying to get the crowd involved in their songs in a way that made everyone feel like they weren’t an outsider, even if they didn’t know the music that well. Funny anecdotes from their time spent together on tour weren’t uncommon (one even included Cedar Falls, Iowa to which we all erupted). They had an interlude towards the end of their set telling us to appreciate the time and support our friends give us and to never stop thanking them. The last song was even dedicated to everyone in the crowd who is, “trying to do it, or is struggling to do it”. It was a great way to cap off the night.