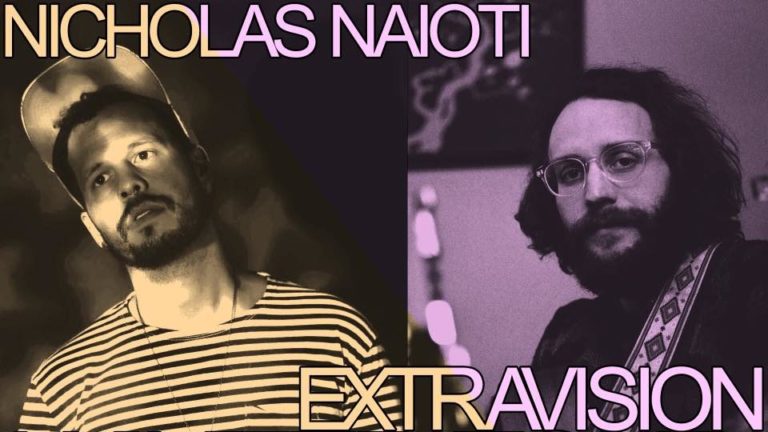 Yoga in itself is a sensory experience often created through the mind with contemplation and slowed breath. A drowsy morning at the Englert Theatre took this basis of yoga a step further when it came to sensory meditation, as participants were immersed in ambient music and psychedelic visuals. The multimedia project and experience, Dimensions: Yoga, Sound, and Visual, was brought to the stage by Nicholas Naioti and Ryan Stier—local songwriters and musicians.

Contrary to a traditional performance, vacant auditorium seats were silent spectators to the real audience onstage. The stage became filled with audience members—participants and yogis game for a unique hour of meditation.

As the lights dimmed, a local yoga instructor addressed an eager group: “If you’re someone who usually closes your eyes during yoga, maybe keep your eyes half-closed and let some of the visuals in.” The visuals in question were trippy animations with a cast of rich, colorful characters. Each participant had front row viewing to mind-bending graphics that experimented with movement, shapes, and visually stunning color schemes.

The audience members lunged in unison, hands reaching towards castles, constellations, and clouds. The visuals crafted a narrative surrounding the relationship of a horse and a small child as well as three half-otherworldly, half-human figures manipulating elements of water, fire, and earth. It is nearly impossible to fully make sense of the projections, but, ultimately, trying to interpret the dream-like storytelling would take away from the wonder it is meant to create, fully in line with the yoga mentality. As cities were rapidly built up, only to crumble to ash onscreen, the yogis rose to Mountain Pose and fell to Downward Dog.

The visual landscape was artfully complemented by the ambiance provided by Naioti and Steir as they stoically control the atmosphere of the space standing at their respective synthesizers. The audio rose and fell with waves of abstract synth tones and wordless vocalizations, along with brief spurts of sounds reminiscent of rainfall and chirping crickets. Both artists felt like they were in conversation with each other as the audio became progressively more layered, providing a calm and meditative space. Halfway through the event, Naioti quietly picked up a guitar, incorporating sporadic bursts of strumming that added additional texture to the audio tapestry the pair have weaved. The guitar is then passed off to Stier, adding contributions to the ongoing musical tone—the audience member truly felt as if they were witnessing the duo in their offbeat laboratory, experimenting and building off of their findings.

Naioti and Steir brought a delicate and creative partnership, fusing ambient and psychedelic elements from their collective musical experience. Hailing from Des Moines, Iowa, Ryan Stier provided vocals and instrumentation for folk-pop band The River Monks, indie rock group Annalibera and, most recently, psychedelic rock project Extravision. Naioti, a native of Fairfield, Iowa, released I’m On Your Side earlier this year—blending aspects of folk and electronic music with authentic, raw lyrics. Naioti also developed a 40-minute ambient music piece entitled Watery Grave that provides a general idea of the atmosphere created for the Dimensions experience. The album’s description astutely explains the power surrounding the transportive atmospheric music Naioti and Steir crafted during the yoga event, “Structure and familiarity lost ground to the abstract’s ability to express the things we experience but words fall short of describing.”

Indeed, no words were necessary here as the audio creation effectively filled the room, only accompanied by the exaggerated exhales and inhales from the crowd. The yoga instructor gently instructed the audience to stay meditative and guided the audience throughout.

Eventually, each participant finds themselves in Corpse Pose—fully lying down, eyes towards the ceiling—the auditorium lights slowly begin to rise while the final notes of synths are isolated, echoing and dying out. As the crowd slowly snaps out of their meditative daze, each member reluctantly starts gathering their belongings and rolling up their yoga mat. Someone enthusiastically exclaims, “This should be a thing all the time.” She receives warm indications of agreement, seemingly voicing the collective group’s opinion. The participants linger a while longer before they ultimately step out into the streets of Iowa City—chaotic in comparison to Naioti and Stier’s loving constructed world.