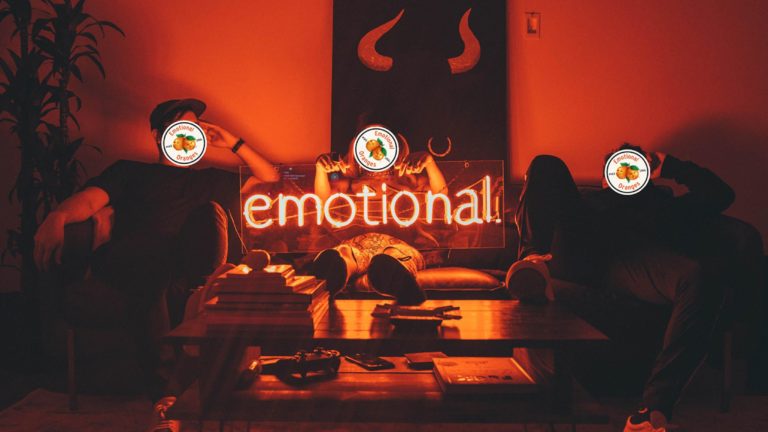 🍊 Emotional Oranges are an enigmatic duo that has captivated the underground pop scene with liquid smooth vocals and a tight production sound. They have already garnered a cult following with their debut album, The Juice: Vol. I. The duo is an LA-based project, allegedly borne from Adele’s vocal coach and Drake’s engineer, according to their Spotify about page. What first caught my interest was the endorsement by both Michelle Obama and Guy Fieri, possibly the greatest personal endorsements to be bestowed on an artist. On their A Very Emotional Tour this fall, the collective has showcased their retro R&B/pop sound from their debut album, with each song seamlessly contributing to the album’s groovy, sultry sound.

According to Vice, the first track “Motion” features a different singer than the rest of the album. The curated anonymity of the collective allows for a diversity of sound and talent to contribute, which shines through in the unique, fresh take on classic sounds from the ’80s and ’90s. The male/female duet with the provocative lyrics,

And we can ride, through the night, yeah

Yeah, I’ve been waiting for some motion

combined with their signature groove makes for a full-body listening experience.

The second track, “Personal”, showcases the strength of the contemporary duet Emotional Oranges plays with. The back and forth playfully engages in an archetypal modern romance:

I like to push her buttons, it gets her tight
I say something slick like “maybe, I ain’t your type”

Why you provoking me, boy please
Why do you f*** with me, knowing…

“Hold You Back” is a personal favorite of mine because it’s a subversive narrative that is unique from the typical pop treatment of love and relationships. The use of pronouns is ambiguous in this song, giving the listener the power to interpret the story being told. To me, the song reads as a female-centered narrative with a bisexual tilt, which makes it especially enjoyable.

By this point in the album, you can’t help but be hooked by the undeniable energy and edge Emotional Oranges brings to an increasingly homogenous pop/hip-hop scene. In “Someone Else”, the collective leans into a staccato electric sound while dissecting the ups and downs of the chase. Wrapped in this slick, tightly produced track is a hint of vulnerability:

Showed all my sides to you
Swallowed my pride for you
You know what I would do
For you, for you

“Good to Me” is a misleading title for what is in actuality, the delineation of a toxic relationship set by enchanting vocals and signature citrus flair. Whether you’ve been her or known her, Good to Me is an anthem for crazy girls everywhere.

Have you met a person you can be honest with? A person who you can be unapologetically yourself with and know they can handle it? “Built That Way” is a song that simply says “I f*** with you.”

How do you let go of something that was never yours to begin with? This is the central question I find in the second to last track of the album. “Unless You’re Drowning” is somewhat moodier than the rest of the album, grappling with the familiar competition of who can care less. There is tension underlying Unless You’re Drowning, with a constant back and forth between the two singers echoing the same lines back and forth.

8. Corners Of My Mind

“Corners Of My Mind” finishes out The Juice: Vol. I with a stripped-down, melancholy rumination on love lost. While undoubtedly leaning toward an acoustic sound, “Corners Of My Mind” still has the Emotional Orange flavor with the electric guitar refrains and distinctive drum line.

We used to fantasize

I only dream about you, without you

I only dream about us, without us

“Everything I’ve ever let go of has claw marks on it.”

Emotional Oranges are a must-see on their “A Very Emotional Tour” this fall. Their stage presence is electric and they bring the songs to life in a way that is irresistible to get caught up in. Catch them before they blow up, and keep up with them on Twitter and Instagram. 🍊