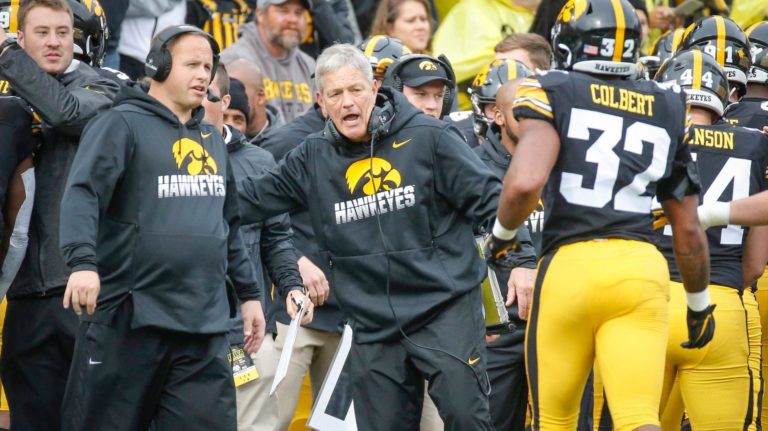 Coming off a 26-20 win against Purdue on Saturday, the mood was lighter around the Hansen Football Complex on Tuesday compared to the previous week. With the Boilermakers behind them, head coach Kirk Ferentz turned his attention to the 1-5 Northwestern Wildcats.

“You look since Pat [Fitzgerald] has taken over, they’ve done a really, really nice job. The bottom line is they’ve got an identity,” Ferentz said. “I think that’s a byproduct of their stability in the program not only as Coach Fitzgerald has been there, but a lot of stability in their staff.”

Fitzgerald has been the head cat in Evanston since 2006 and in recent years has turned Northwestern into a Big Ten West force, leading the Wildcats to the Big Ten West title last season.

However, lack of offense has doomed the Wildcats for all of the 2019 season. With senior quarterback TJ Green out and former 5-star recruit Hunter Johnson struggling, the Northwestern offense has only averaged 12.5 points per game, third-lowest in all of Division I FBS.

The Northwestern defense has felt the struggle as well, but Ferentz says to not look past how good of unit Northwestern has defensively.

“They’ve been playing really good defense. Those two linebackers inside are really good players,” Ferentz said. “They have a good front. Those guys play hard, are really well-coached, do a great job. They’re very opportunistic in the back end.”

Northwestern’s secondary may jump at the chance to challenge Iowa with leading receiver Brandon Smith out with a bone contusion in his ankle. Ferentz expects he’ll miss 3 to 5 weeks with the ailment. Expect players such as Calvin Lockett and Michigan-transfer Oliver Martin to potentially see more snaps come Saturday.

A big question coming into last week was the competence of the rush offense. They only rushed for a hair over 100 yards, Ferentz has seen quite a bit of improvement up front.

“I think we made progress last week. I thinking things looked a little more cohesive with our blocking,” Ferentz said. “It starts there. There’s a lot of moving parts there. Getting A.J. [Alaric Jackson] back in the lineup, he looked a little sharper Saturday.”

Another big question was the battle between junior Matt Hankins and sophomore Riley Moss at the left cornerback spot. Moss replaced Hankins in the second half and recorded an interception and helped slow down the Boilermakers passing attack.

Ferentz said that practice would decide who gets more reps come Saturday.

“We’ll let them practice this week, make a decision. We weren’t necessarily planning on putting Riley the other day,” Ferentz said. “He did a good job. No sense taking him out.”

Iowa kicks off against Northwestern at 11 AM. You can listen to KRUI’s call online at mixlr.com/kruifm/.