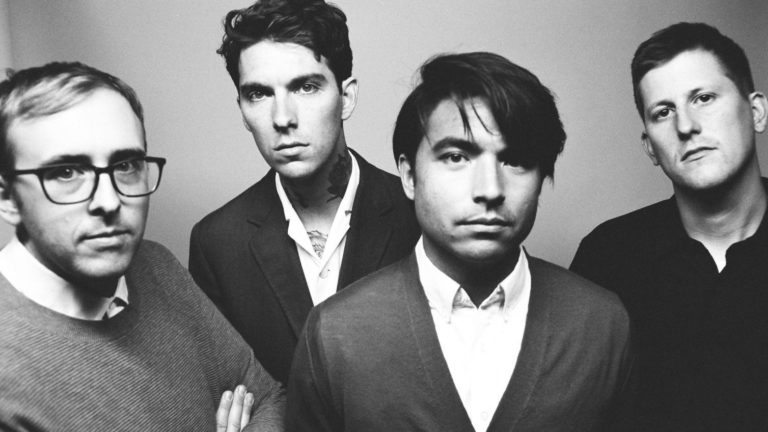 The softly-pulsating fiber optic lighting crawling around the scaffolding in the ceiling of the venue set an appropriate mood for the night: waxing excitement. As more people trickled onto the dimly lit floor, chatter among the show-goers increased in volume. Looking around at the people I was going to spend the next few hours awkwardly head-bopping and feet-shuffling with made it very apparent most of them had a personal connection to the band and/or the type of music they represent. Whether it was a Joyce Manor t-shirt, a plaid flannel and Carhartt-esque beanie combo, or a group of friends reminiscing on the songs that accompanied their high-school years, this did not come off as a show someone disconnected from Joyce Manor or the punk scene would wander into.

The first of the two opening acts was Strange Ranger, an indie rock band from Portland. Being somewhat familiar with their music from when they went by the name of Sioux Falls, I expected to hear more of their signature lo-fi emo sound (“Dom” off their first record, Rot Forever, perfectly encapsulates what I mean). I was quickly proven wrong. Playing a variety of songs off their most recent album Remembering the Rockets, I was greeted by a more refined, atmospheric sound. There were more driving riffs, and less distorted and fuzzy guitar overtaking other instruments. The usage of keyboard in some of their songs (particularly in “Message To You“) helped create a brooding, ethereal sound. They ended their set on a cheery note by playing “Leona”, an upbeat tune which included a jubilant acapella at the end.

The floor became more and more crowded as the next group, Stef Chura, tuned their instruments on-stage. They were a perfect fit for the accompanying rise in energy. Providing an infectious 90’s rock sound, the crowd around me started to nod and sway more than they were previously. Lead singer Chura’s unique vibrato vocals held my attention the entire set. Each song did a great job of building tension using the ‘negative space’ in-between drum hits and guitar strums. By the end of their last song, almost everyone near the stage was dancing and pumping their arms in the air.

By the time each member of Joyce Manor had plugged in their amps and turned on their pedals, the once-fettered electricity buzzing in the atmosphere of the crowd had broken loose. No longer was anyone trying to be quiet in reverence for the musicians on stage. Everyone wanted their presence to be known.

Joyce Manor’s lead vocalist and guitarist, Barry Johnson, had a very commanding stage presence. Without even sounding off a single note, the tattoos that snaked up his arm and onto his neck gave an indicator he was a pop-punk veteran. His swagger on-stage was undeniable and gave credence to how captivating the entire show was.

As soon as the guitars started chugging to start off “Beach Community”, the center-stage audience erupted in movement. I made the mistake of looking down at my phone when the music first started, because I immediately got jostled around by a quickly forming mosh pit. All it took was one stray, accidental glance at an excited participant to initiate my assimilation into the frenzied circle. While I wasn’t mentally or physically prepared to be shoulder-checked by six different people that night, there was a certain catharsis involved in letting go of civil standards. It got my adrenaline pumping for the rest of the show and made me feel more connected to the music. It was some personal insight into a slice of punk life.

The energy of the crowd and the band never dissipated. The frantic, screaming voice of the lead singer accentuated the sharp ringing of intermittent guitar riffs. Lamentations of confused love were a common theme throughout many of the songs and gave an already melancholic atmosphere an even more bittersweet twinge. This is on full display in Joyce Manor’s most popular song, “Constant Headache“. Unrequited romance isn’t something one would necessarily want to jump up and dance for. However, the energetic recitation of the song by the crowd was grounded in the fact that almost anyone can relate to its lyrics in some way. It made for a powerful experience. At the end of the song, a collective weight was lifted.

The show culminated with a much different song, “Five Beer Plan“. It started off with a slow bass line, isolated and consisting of only a handful of notes. The singer belted out some measured lines and the crowd following not far behind. After a verse or two, the ambient buzz of the amp kicked on and hung in the air just long enough to build some tension before the lead guitar came screaming in, backing the bass line. Following a few repetitions of that same pattern, all the instruments stopped and came to a precipice with the line, “I f***in’ told you so”. The lyrics rang for a second before the instrumentals came crashing back in, pedals and cymbals being struck with lawless fury. This song was a perfect microcosm of how the night played out. A buildup of tension and then sweet release.