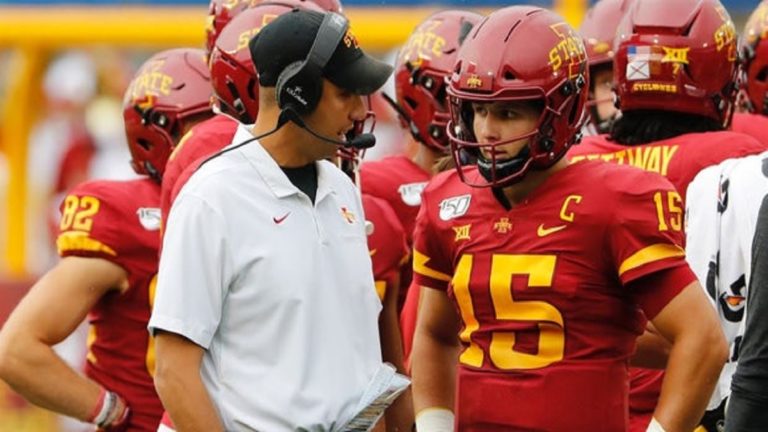 There is a reason ESPN’s College Gameday is making the trip to Ames this weekend and it’s not just for the boys coming from the west on Highway 30 (more direct than I-80).

Now in his fourth season at Iowa State, Matt Campbell has turned a historical Big 12 doormat into a conference title contender. He’s done so against the grain of what passes in the Big 12 conference, with defense and clock control.

If we’re being completely honest, Iowa and Iowa State are mirror images of each in some aspects. Controlling the clock with a punishing run game, frequently using play action passes, a dominant defense, and superb special teams play.

Unfortunately, the last one has been a thorn in the side of Iowa State lately, as junior kicker Connor Assalley struggled as a sophomore, but had a solid day against UNI in the season-opener. Iowa State also lost returning punter Corey Dunn for the season to a torn Achilles in camp.

But with those similarities, there are some drastic differences in schematics. Iowa State is a spread offense and frequently uses three or four receivers at a time. The Cyclones do run a 3-3-5 defense under Jon Heacock, a stark contrast to Iowa’s 4-3/4-2-5 base look.

But a deeper look into the Cyclones prove that they have equal amount of question marks as studs in their camp.

The story of Brock Purdy is an interesting one. A three-star recruit out of high school in Arizona, Purdy was offered a scholarship to Alabama, as well as Boise State, Texas A&M and a smattering of other Power 5 programs. Purdy chose the Cyclones and came into his freshman season as the third-string quarterback.

With an injury to Kyle Kempt and inconsistent play from Zeb Noland, Purdy was thrown into the fire at Oklahoma State and played well enough to never relinquish his position.

But concerns rose about Purdy following the Cyclones triple overtime win against in-state foe UNI. Purdy only averaged 6.8 yards per pass attempt in the game. He averaged 10.2 yards per attempt last season with Hakeem Butler in the mix.

While he does have a very talented safety valve in DeShaunte Jones, the rest of his receiving core is a question mark as well. The lack of continuity between Purdy and his receivers may be why the deep ball wasn’t as prevalent in their season opener.

Purdy was a good quarterback last season, but for him to take the step to the next level, he has to be able to make the skill players around him better.

When you think of Big 12 football, defense is one of the last thing that comes to mind. That is until Matt Campbell brought along Jon Heacock as his defensive coordinator when he arrived in Ames in December of 2015.

In three seasons, Iowa State saw their total defense rank go from 87th in 2016 to 26th in 2017, and back up slightly to 37th last season. In a conference dominated by offense, the Cyclones have embolden themselves as the Bullies of the Big 12.

“They’re a unique defense,” Iowa head coach Kirk Ferentz said at his weekly press conference. “There’s only a couple teams I can remember that did similar things to what they do, somewhere back in the ’09-’10 range.”

It all starts up front with Iowa State and what might be the best defensive line in the Big 12, with Ray Lima, JaQuan Bailey and Eyioma Uwazurike. The former two were All-Big 12 selections a season ago.

But the Cyclones biggest defensive strength is in the linebacking core, with veterans like Marcel Spears Jr., Mike Rose and O’Rien Vance. Iowa will need to slow those three down to have any shot at a run game on Saturday.

If it’s offense you’re looking for in this Cy-Hawk game, you probably won’t find it with two great defenses going at it.

A slew of running backs

Replacing an unbelievably skilled running back in David Montgomery is not an easy job, but Matt Campbell and crew are trying to do it.

The only back who didn’t see action against UNI was Brock, who was listed as the last running back on the depth chart. But the two backs that impressed me the most were Sheldon Croney Jr., and true freshman Breece Hall.

Croney’s second half performance is a big reason why Iowa State was able to cling on to their 29-26, triple overtime win two Saturday’s ago, amassing all of his stats in the 4th quarter in overtime. This leads me to believe that Croney will be the Cyclones go-to guy on Saturday.

Breece Hall is another back to watch as well. I was told during camp that former Iowa State head coach and former Iowa assistant Dan McCarney was back for a camp session and was said to have stated that Breece Hall has a chance to be one of the best backs Iowa State has ever had.

Hall looked like a freshman in his first game against UNI, but did show some flashes that he has the ability and speed to make it at Iowa State.

A lot of people throughout the preseason christened Iowa State as one of the favorite’s in the Big 12 this season. In a year where the conference is down in terms of great teams, I don’t blame them.

However, the UNI game showed there are still some holes on the Iowa State team, including an offensive line that appeared to have very little improvement from last season.

Iowa State is a good football team, but this game against Iowa will likely be more telling going forward for the Cyclones than it is for Iowa.