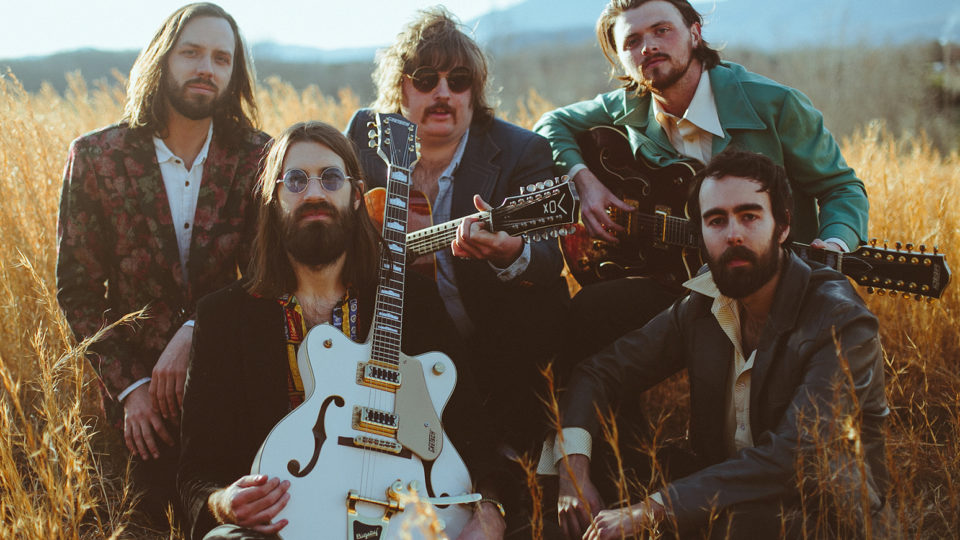 The usually dark second floor of Gabe’s was aglow from the light of a sizable yellow neon sign bearing the band’s name in a psychedelic font. The members of The Artisanals looked as if they stepped straight out of the 1970s as they took the stage on Thursday night, a crystal lamp and paisley rug rounding out the vintage setup of the Charleston-based five man group.

While influenced mainly by psychedelic and heartland rock, The Artisanals’ music blends together several different genres, a sound which the band’s website describes as, “The sound of the road; of heartache and good times; of an old classic and a new favorite.” Three guitarists and a strong drummer make for a heavy rock sound and the reverberations almost shook the floor of Gabe’s. Yet The Artisanals aren’t afraid of reverb. They embrace it. Each instrument is pushed to a maximum state of resonance, echoes compiling to create an overwhelming aura of sound in every song.

Lead vocalist Johnny Delaware—donning a red leather blazer—greeted the crowd with a bright smile underneath the scruff of his full beard. Taking on a similarly retro look, other members of the band include the dexterous Clay Houle on lead guitar, Eric Mixon on bass, Nick Recio on drums and varied percussion, and Ian Klin on keyboard. Friends of the band were scattered throughout the audience, voicing their support through excited cheers. The musicians were happy to return to Iowa, Delaware poking some fun at midwestern colloquialisms with a sarcastic, “You betcha it’s great to be back in Iowa.”

The setlist featured songs from their 2018 debut album The Artisanals, with a few instances of new pieces they are currently working on. An echoey piece started out the set with a steady drumbeat taking the audience along for the ride. Electronic piano, chimes, and guitar soon joined in, creating the perfect atmosphere for Delaware’s vocals. His impassioned voice easily covered a lengthy range, moving from low bass notes to falsetto “oohs” in a matter of seconds.

Delaware was a flamboyant presence, bucking his guitar around as he played, his shoulder-length hair constantly being flipped around. Energized by the music, he frequently kicked his legs out of the crowd. His feet were likely up in the air for as much time as they were on the ground. Though a bit more subdued, fellow band members joined Delaware in his head-banging rampage throughout the night.

Older tones of rock shape their sound as the band claims to find inspiration in John Mellencamp, George Harrison, and Tom Petty, while simultaneously taking cues from more current bands like The Killers. Though the style of music the group emulates dates back a few decades, The Artisanals are very inventive with their sound. They seamlessly integrate unique musical elements typically resigned to more orchestral arrangements, like chimes, thunder and wind sound effects, and the use of a gong in “Drag.“

Lyrical content for The Artisanals surrounds past and present lovers, experiences as musicians, drug use, following your heart, self determination: all different narratives from a bohemian lifestyle. The band isn’t ignorant to the connections between their music and the culture of the seventies. Delaware even introduced “Pound the Rock” by listing off details what the song was about, summarizing with a smile, “You know, all that hippie shit.” They don’t take themselves too seriously, and this carefree nature inspires joy in their music.

“Angel 42″, the first single the band ever released, finished out the night. This upbeat piece which features sitar-like strings covers the gambit of what The Artisanals create—a lost love, fostering connections through music, heavy guitar, shrooms, and a nomadic lifestyle. Anything and everything one might need to live a bohemian life in the 21st century.

Though The Artisanals are old souls with a vintage sound, they are a group still very much on the rise. New releases are sure to appear as they continue on a tour around the United States until this summer, and I for one can’t wait to see what further ingenuity they bring to the rock world.