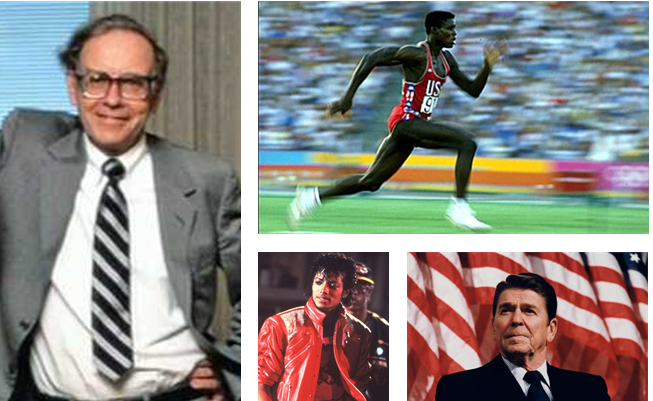 Carl Lewis dominated the Olympic Games in Los Angeles, matching Jesse Owens’ feat of four gold medals in a single Olympiad. His 28-foot long jump was so dominant that Lewis didn’t even use all his jump attempts.

Ronald Reagan dominated the presidential election, winning 49 states’ electoral college votes. His opponent, Walter Mondale, barely managed to eke out a win in his home state of Minnesota, earning 49.72% of the state’s votes to Reagan’s 49.54%.

In May of that year, Warren Buffett dominated academia’s prevailing faith in a theory he viewed as utter nonsense. Most appalling was that business school graduates were descending to Wall Street in droves, equipped with these flawed and potentially dangerous views of how markets actually work. He made his case at the 50th anniversary of the seminal book on value investing, Security Analysis.

The efficient market hypothesis claims that markets are efficient. In other words, there is no benefit to analyzing stocks and trying to beat the market because all prices correctly reflect any information one could legally obtain. Any overperformance (or underperformance) was purely attributable to luck.

Proponents of this theory would explain the success of someone like Warren Buffett as follows: If 225 million people enter a coin-flipping contest, after 20 rounds, there will be 215 people left who have each won 20 consecutive coin flips. Buffett is one of those.

This is a strong argument. After all, if you had an infinite number of monkeys banging on an infinite number of type writers, one would eventually recreate this very article you’re reading. Buffett’s superinvestors present a compelling counterargument, however. What if a single zoo in Omaha housed one monkey that wrote Shakespeare, one that wrote Hemingway and another that wrote Vonnegut? You’d start to suspect something was up with that zoo.

Buffett then presented the track records of nine superinvestors he had met at least 15 years before. All sought to “look for values with a significant margin of safety relative to prices” when investing. All had beaten the market handily over several years operated more or less independently of one another, finding different ways to locate hidden value in investments.

What they shared was a commitment to Graham’s investment principles. Namely, view stocks as pieces of a business and buy those businesses at a discount (i.e. margin of safety) to their true value.

Much like coaching trees in professional sports, one can trace many successful careers back to the root of Benjamin Graham. He uncovered and taught simple, yet profound truths about investing that anyone can apply. To learn more about these truths and how you can apply them to your personal finances, check out resources from sites like DemoFinance, and maybe you can dominate like it’s 1984.