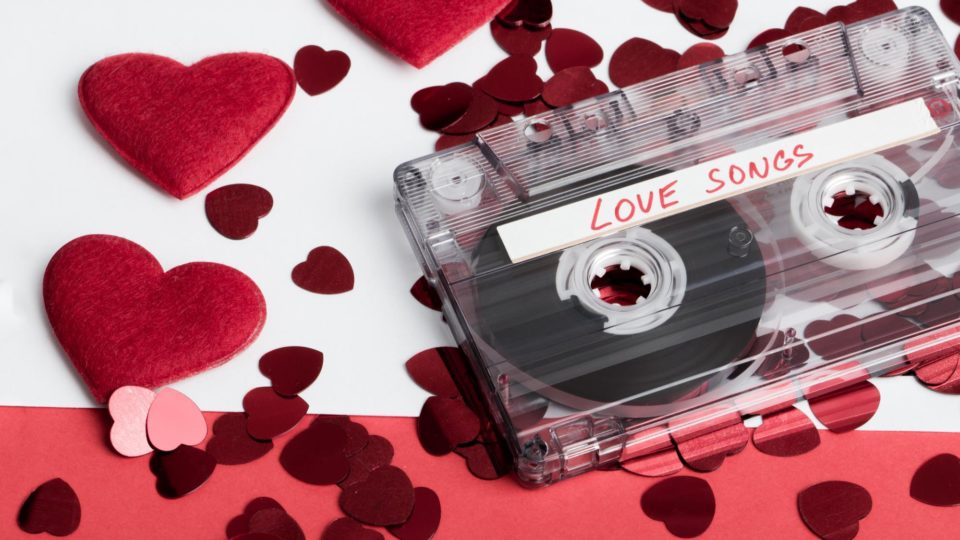 Rosy hues plastered across aisles full of heart-shaped knick-knacks and stuffed bears all point to one thing: Valentine’s Day. Amidst all the souvenirs and other typical V-Day traditions, music sits as perhaps the most powerful contributor to a romantic atmosphere.

Music can heighten our emotions, set a tone for the night, and even break the tension of an awkward or high-pressure date. We all have those songs that put us in a romantic mood, but what really makes a song a love song?

Lyrics certainly play a big role in this categorization. Love songs generally contain lyrics admiring the appearance of a loved one, describing the singer’s devotion to them, or imagining a future of their lives together. Music provides us with another outlet to express feelings. The lyrics of a song can often speak to emotions you are unable to put into spoken words.

You could try to boil love songs down to anything you can slow dance to, but the notion of what makes a love song has shifted dramatically over the years. Some tracks will always remain quintessential to the category of love songs, but the way we express ourselves has changed over time; music changed alongside us. Tracing the history of love songs is a fascinating journey into how people convey their feelings through song.

Early love songs, roughly from the 1930s to 1940s, share a slow rhythm and ballad-like vocals. Many of the songs written during this era have lasted far beyond their creation, recreated by countless musicians. Composers Cole Porter, Irving Berlin, Jerome Kern, and George Gershwin dominated the love song charts. Piano was the instrument of choice, songs focusing on the intimate feeling created by stripping down the music to simple duo of keys and vocals.

Classics like “I’ve Got You Under My Skin,” “Cheek to Cheek,” “My Funny Valentine,” and “They Can’t Take That Away From Me” all come from this period. But perhaps the most influential song of this time is “The Way You Look Tonight,” written in 1936 by Jerome Kern. It debuted in the film Swing Time, sung by Fred Astaire to Ginger Rogers. This song has remained a standout of romantic music, being covered by Frank Sinatra, Ella Fitzgerald, and more.

The 1950s and 1960s carried over some tropes from past decades, songs like “Moon River” and “Can’t Help Falling in Love” upholding slow tempos with simple accompaniments. However, changes in mainstream music and the rise of popularity for rock ‘n’ roll, soul, and doo-wop pushed the love song out of its comfort zone. Songs were faster, had driving beats, and featured more complex instrumentation. There wasn’t one “correct” type of music, genres diversifying for wider audiences.

The Supremes and The Chiffons brought female groups into the spotlight with harmonized hits including “Baby Love” and “One Fine Day.” The content of love songs didn’t have the same one-on-one intensity of those in the 30s and 40s. Tracks like “Oh, Pretty Woman” by Roy Orbison employed freer lyrics and tempos, painting romance as a celebration. Love songs of these decades invite the listener to dance around the room as they pleased, not sanctioned to the static slow dance.

Change was rampant in the 1970s, and this change deeply extended into music. Romantic tracks gained a sensuous feeling with slow beats and twangy guitar riffs, personified most clearly by Marvin Gaye’s “Let’s Get It On.” The ballad also gained new footing, with new additions from guitar and even synthesizers.

The 1980s had a flair for the dramatic, and drama was palpable in the hard hitting love songs from this time. Vocal powerhouses like Whitney Houston and Tina Turner shared airtime with glam-rock bands, all commenting on romance in a variety of ways. Love wasn’t solely idealized anymore, it also took on negative connotations, like in Bon Jovi’s “You Give Love a Bad Name” and Pat Benatar’s “Love is a Battlefield.“

Coming back to the present, love songs have diverged into subgenres of pop, soul, and R&B. Pop love songs are usually overplayed, semi-downtempo, and typically have lyrics pertaining to the overly-cheesy parts of romance. In short, they are the ones most likely to be played at a relative’s wedding.

Soul love songs are tender in lyrics and musical prowess, integrating pared down percussion to compliment nuanced vocals and instrumental riffs, Leon Bridges’ album Good Thing a magnificent example. The R&B category of love songs align with the tendencies of the 1970s songs, pushing sensuality and the physical side of love with slow beats and intimate — and often explicit — lyrics.

Music speaks to us in a multitude of ways, frequently to our emotions. Exploring what love songs are to you can reveal feelings you may have not even known you held. Love songs are for everyone to enjoy, not just people in relationships. Even those who are avidly anti-Valentine’s Day can find something to love through music.