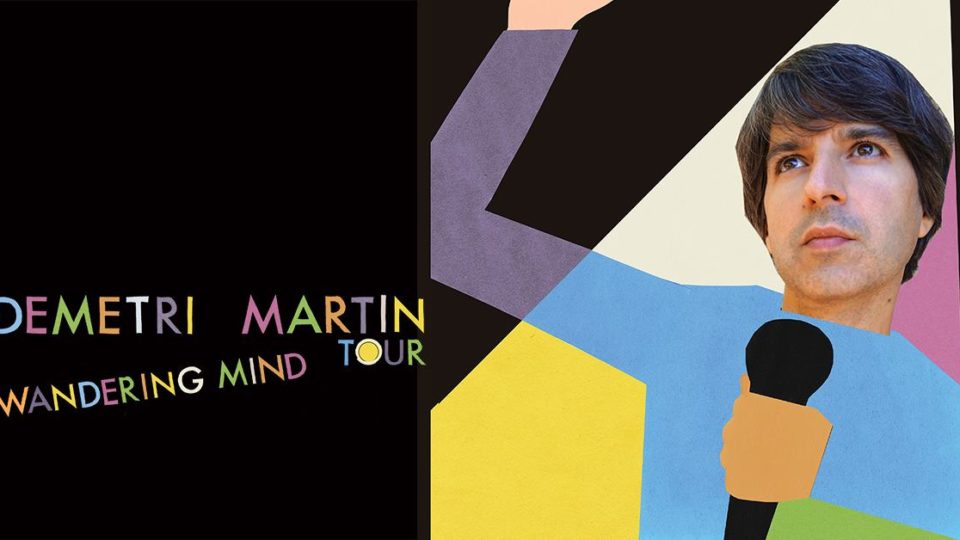 Comedian Demetri Martin entertained a captivated audience this past Friday at The Englert Theatre.

Martin was very prevalent in most of our generation’s younger years. With that affect, the crowd was filled with a good mix of both older and younger adults.

Martin is currently in the middle of his Wandering Mind Tour. He is best known for his rise to fame in the late 2000s, with such spotlights as his Comedy Central show Important Things with Demetri Martin and acclaimed comedy specials, Demetri Martin. Person. and Demetri Martin: Standup Comedian.

Martin’s current tour showcased all the aspects that he specializes in, be it quirky puppets, a large note pad filled with both puns and humorous images, and his rapid fire use of one liners whilst playing an acoustic guitar.

This show presented a comedian that is truly an expert in his niche style of comedy. It was fascinating to see a comic who can demand an audience’s attention even though he is often soft spoken and firmly standing in one place.

This event also showed that even after almost two decades that his craft hasn’t evolved greatly. Martin’s views are so similar to his past material, it seems some of these jokes could have been performed 10 years ago. The greatest aspect of an artist that has been performing for decades is watching their art/craft evolve over time, but I’m hesitant to state if Martin’s has.

The aspect of this show that was truly attention grabbing and unique was the way Martin would talk about death and aging in the small breaks between his other jokes.

Martin started the show with simple, yet cleaver observations of the famous Englert Theatre, pointing out a very overlooked aspect of the theater, that it has both green and red fire exit signs.

Then bizarrely, the audience witnessed the artist receive a phone call on stage. Martin’s cell phone was in his pocket and left on ringer. At first this seemed to almost be a bit that may have ran throughout the show, but since it never occurred again, it must have been an actual slip up made by Martin. This hiccup was played off very well by the comic, but still it was a very uncommon and unmannerly thing to happen during a professional show.

The show then continued with Martin moving on to his classic large notepad. This bit was built around Martin conducting a very humorous interview with a hand drawn demon from hell. This interview covered everything from the petty bureaucracy of the flaming underworld, the point system that deems if someone will go to hell or not, and finally explaining why Martin himself will go to the doomed afterlife.

Martin then continued to his desired improvements to sports, so less athletic-minded people will enjoy them. After ten or so minutes of very clever and surprising way to spice up sports Martin, went back to his notepad, finally ending his show with an acoustic guitar rifting, spouting out his normal clever and very funny observational humor one liners.

Another intriguing aspect of Martin’s act was a moment where he discussed his thoughts on humor based around his private life. Martin explained how he had two children and a wife, but felt comfortable using his experiences with them as a material for his shows. As a creative, this helps paint the unique constraints Martin puts on himself to find humor in other aspects of life that other comics can’t.

This show was something that many probably haven’t experienced in person before and probably won’t ever again. This style of comedy is something difficult to find in the age we live in, but it is definitely Martin who leads the way into it, even if it hasn’t evolved much over the past few years.

Check out the links below for some great videos of Demetri Martin: