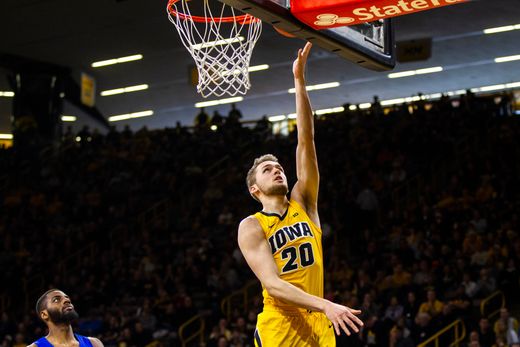 It’s not very often in Division I college basketball that you get the chance to empty your bench the way Iowa did on Saturday afternoon. It’s even more rare when everyone scores, including all of the walk-ons. But, that’s exactly what happened in Iowa’s 110-64 win against the Savannah State Tigers.

In the win Iowa set a new school record with 19 made threes, ironically the previous record, 18, was set in 2016 against the same Savannah State team. “It depends on the style you do it in” Fran McCaffery said of the 42 threes Iowa took as a team. “The key is not to become three-happy, you have to take good threes.”

Iowa’s rotation was a question mark before the game as it was announced Luka Garza and Connor McCaffery would both miss the game with various ailments. McCaffery was still in concussion protocol and Luka Garza had sprained his ankle. Coach McCaffery does not know if Garza will be ready for the Big Ten opener against Purdue on January 3rd.

A familiar face returned to the Iowa score book as Jordan Bohannon had his best game of the season, scoring 18 points and shooting 6-for-14 from downtown. “He was able to use some ball movement and get some shots up, that’s what I want him to do, keep firing them”, McCaffery said of Bohannon’s performance.

Iowa was led in scoring by Joe Wieskamp, as the freshman from Muscatine had a game-high 24 points, including five three-pointers. “I knew that I probably wouldn’t be playing a whole lot, so I just tried to score early and often and just be efficient when I got my shots”, Wieskamp said of his day.

But throughout the second half, the walk-on crew of Riley Till, Austin Ash, Michael Baer and Nicholas Hobbs stole the show. Riley Till led the group with 10 points. “I felt like I played well, I was happy with my performance and how the team played”, Till said of the win.

The most exuberant part of the afternoon was when freshman Michael Baer, brother of senior forward Nicholas, drained a three-pointer with under a minute to go to ensure every Hawkeye scored and set the school record as well.

We ask because we have 19 of them here.

The Hawkeyes get a week off for the holiday season before they return to action against the Bryant Bulldogs. Iowa then travels to Purdue to kick off the Big Ten season on January 3rd before returning to Iowa City to take on the border-rivals Nebraska Cornhuskers on January 6th.