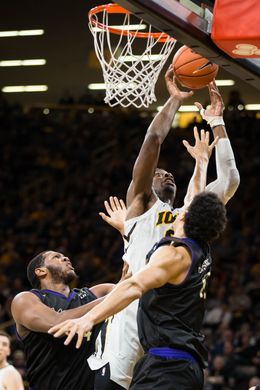 Tuesday night’s game was a classic non-conference mismatch between the Big Ten, 22nd-ranked Iowa Hawkeyes and the Catamounts of Western Carolina of the Southern Conference. The game was controlled throughout by the Hawkeyes, but the Catamounts showed they were willing to make it a dogfight.

“It was a strange game” Iowa head coach Fran McCaffery said “I don’t remember a game where a team shot 65% from three, and went in at the half down 19”. It was an odd game at that as Western Carolina shot the ball better in the 1st half, but the glaring stat was the Catamounts 15 turnovers to Iowa’s 4 turnovers.

“I’m not sure there has ever been a stat like that in the history of basketball”, McCaffery quipped afterwards. In all Iowa forced 26 turnovers, by far the most they have forced this season. “We put heat on them” Luka Garza said of Iowa’s defense, “They shot 60%-plus from three in the first half and we didn’t like that, but we made our adjustments and really frustrated them.”

Garza built off his comeback performance against UNI with 15 more points, six rebounds and two steals. Once again, however, Tyler Cook led all Iowa scorers with 18, he wasn’t as efficient as he was against UNI, but he still was able to dominate the Catamounts, as displayed on this two-handed jam in the second half.

You knew @iamtc25 wouldn’t let a full game go by without at least one of these. 💪@IowaHoops is cruising to a win over Western Carolina: pic.twitter.com/tNgeucCyfP

A notable statistic for Tyler Cook was his free throw shooting, which has improved markedly over the past few games. Some had criticized Cook’s inability to hit key free throws for Iowa, but over the last two games, has shot 12-for-15, a percentage of 80%, well above his season average.

“I just try to stay consistent, shooting the same way every time” Cook said of his hot streak, “I just try to trust myself”. Iowa’s scoring was very spread out as Cook, Garza and Wieskamp all finished in double digits, while Isaiah Moss and Connor McCaffery both finished with nine points as well.

Next action for Iowa will be Saturday at noon against the Savannah State Tigers of the Mid-Eastern Athletic Conference in their second of three games against NET teams below 300. Quinn Douglas will have the call for KRUI beginning around five minutes before tipoff.