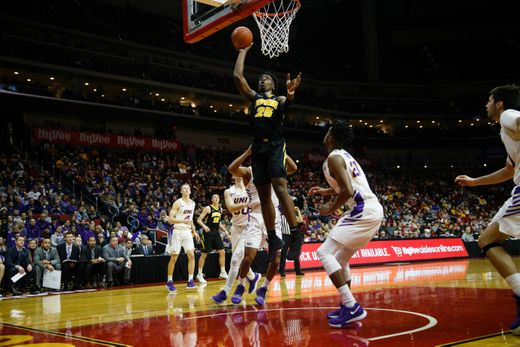 Tyler Cook came into Saturday’s game against Northern Iowa with 986 career points in the Black and Gold, 14 shy of 1,000 career points. The matchup appeared to be a favorable one for Cook to reach the milestone and did so early through the second half on a putback layup off a Luka Garza miss.

“It’s cool” Cook said of the achievement, “But the most important thing is we got the win, I’m not a primary ball-handler so I couldn’t get to this point without guys like Jordan [Bohannon] and the rest of my teammates and my coaches for giving me the best opportunity to score the ball”.

Fran McCaffery wasn’t as shy to sing his praises about the milestone Tyler Cook had surpassed. “I’m thrilled for him”, McCaffery stated. “The great thing about, when you have a guy who’s your best player, ‘does he think that way? Is he a team guy?’, and all you have to do is look at his stats tonight.”

Cook ended up tied for the team lead in scoring with 17 in Iowa’s 77-54 win over the Panthers of Northern Iowa in the final HyVee Big 4 Classic as Iowa and Iowa State pulled out of the series for various reasons such as conference scheduling and criteria set by the NET Rankings, the new determining factor on who makes the NCAA Tournament.

A welcomed sight was the re-emergence of Luka Garza in the scoring column. Garza matched Cook’s 17 points on a 7-for-14 shooting performance that helped him over a slump that lasted throughout Iowa’s daunting four-game stretch against Power 5 conference opponents.

“It was great” Garza said of regaining his rhythm, “I’ve been in the gym, I’ve been getting some shots up and getting back to the basics. I had a couple games where shots were just not falling, so it was a good confidence boost for me”.

This game was definitely the best defensive performance the Hawkeyes have given in the regular season, holding UNI to 54 points and only 36% from the field and just 21% from three. Jordan Bohannon set the tone right away against freshman sensation A.J. Green, someone Bohannon has had some history with.

“That game will always have an imprint on my brain for the rest of my life”, Bohannon said. The game in question was Cedar Falls win over Linn-Mar, Marion in the substate round of the Iowa High School 4A Playoffs in 2016. Jordan Bohannon had 44 points in the overtime loss while A.J. Green’s Cedar Falls team advanced to play in the state tournament at Wells Fargo  Arena.

“Anytime from here on out when I face A.J. there will be some bad blood, but he’s a great player. He’s only a freshman and how he’s able to handle the ball and how he’s able to create his own shot, he’s gonna be really special in the upcoming years”. Bohannon spoke of A.J. Green.

Iowa ends the Big 4 Classic era with a 5-1 record, the only loss coming against these same Northern Iowa Panthers back in 2014 with players in the game such as Aaron White, Seth Tuttle, Mike Gessell and Wes Washpun. UNI Senior Wyatt Lohaus was the only player on either team to have been apart of that game.

With the win Iowa moves their record to 8-2 with an easy slate to close out the 2018 calendar year against Western Carolina, Savannah State and Bryant College before regular Big Ten play begins on January 3rd as the Hawkeyes will travel to West Lafayette to take on Purdue.