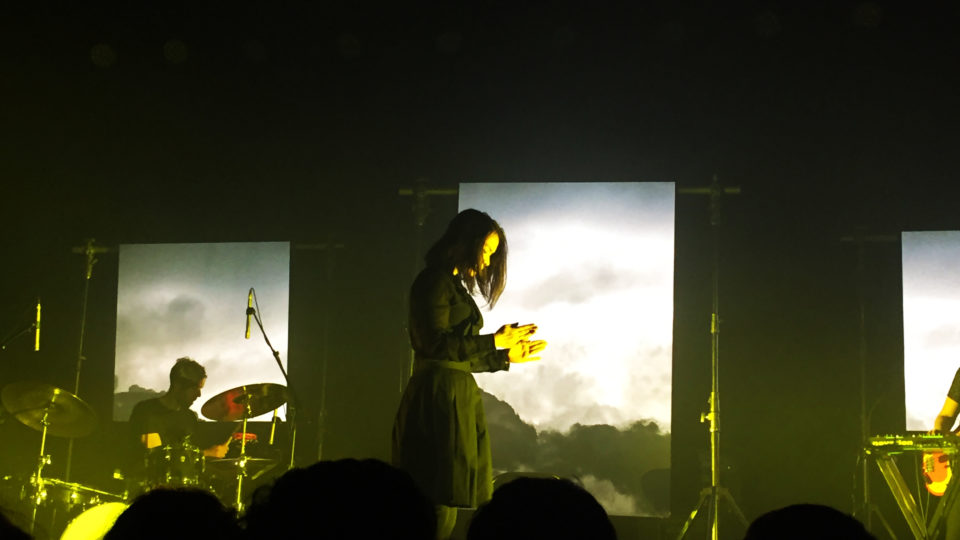 Halfhearted rain fractured dizzy fluorescents on the dirty pavement, in an unfamiliar city that could be any arrangement of corporate buildings in any state. Haloed in a cloud of secondhand smoke, the Dr. Marten and cowboy hat-clad crowd lay in wait for their patron saint to take the stage.

A buzz in blue light started off the set last Friday night, and The Overcoats took the stage in the wake of an encroaching drum beat. Their voices flitted together like songbirds, playing off of each other and bouncing off the walls.

The Overcoats are an electronic folk duo lead by Hana Elion and JJ Mitchell. Their chemistry threw sparks across the stage and warmed the whole room. They had so much heart between them. It ballooned and filled them with a steadfast loyalty to the music, the audience, and each other. Their most captivating performance was “I Don’t Believe In Us”, a single released in 2017.

Please understand me, you don’t love me like you think you do

Staring into each other’s eyes or with one arm slung around the other person, it is clear that whatever failing of the song’s subject had been more than made up for by the connection they had with each other and the music.

Their first album ‘Young’ came out in 2017, and their second album is soon to come.

Whichever indie rock or pop shows you’ve been to before, Mitski’s show was absolutely nothing like them. Backlit by panels of frenetic lines and spinning vortexes, inverted skies and hypnotic suns, Mitski took center stage like a phantom in the sickly yellow light. She gave an arresting performance of an artist at the height of their power.

At once theatrical and haunting, Mitski set her iron-clad vocal control against a spasming, almost robotic choreography. She didn’t address the audience until at least 4 or 5 songs in, instead moving ceaselessly between songs. From “First Love / Late Spring” to “Why Didn’t Stop You”, she was relentless and confronting and absolutely impossible to look away from.

Her most well-known songs are iconic for their lyrical confession. Her skill is putting naked confessions right in front of you, where you can’t look away.

And I know no one will save me

I just need someone to kiss

Give me one good honest kiss

And I’ll be alright

As a responder, I had my expectations of intimacy with the artist confronted and wholly subverted. Mitski herself says it best in an interview with Pitchfork, “I was always bothered when people say, ‘I cry to your music, it sounds like a diary, it sounds so personal,’” Mitski says. “Yes, it is personal. But that’s so gendered. There’s no feeling of, ‘Oh, maybe she’s a songwriter and she wrote this as a piece of art.’” These sentiments are similarly echoed in a Guardian interview, and her resistance to being a figure on a pedestal in a Fader interview as well.

This show was a complement to that, every haunting light and jerk of her arm serving only to make it feel as though a wind-up doll was on stage. There was no hint of the “real artist” or the dear friend you thought you had on stage. It is as though she was subverting expectations by giving the audience exactly what they really want. She was a puppet being jerked back and forth by other people’s expectations.

She paced like a restless spirit or a woman possessed, frantically pantomiming or jerking her arms in time with the almost schizophrenic beat, and at other times pulled it all back into tightly controlled, ballerina-like posturing. There was an intriguing sense of complete control, even in the moments where the crashing of the drums and warped chords seemed to be careening toward a breakdown.

Wrapped in the microphone cord or merely sitting in a folding chair, her presence was at once remote and inescapable. If you have the chance to see Mitski on her Be the Cowboy tour you absolutely must, as the experience can only be felt raw and naked in the audience and for echoes in the days after. Featuring songs from Be the Cowboy as well as Bury Me At Makeout Creek and Puberty 2, brush up on your Mitski discography with the playlist below.