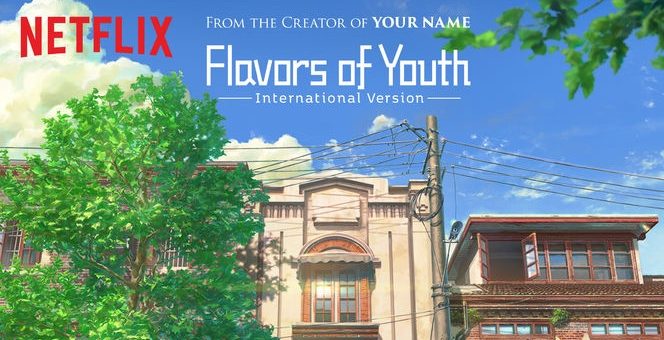 Netflix is full of movies and shows that catch our interest but we never end up watching. For a long time Flavors of Youth was exactly that for me.

Each segment did a fantastic job of being original from the others while also keeping to the main themes of growth and nostalgia. When looking at an anime film such as this the three key elements are animation, story and sound.

Flavors of Youth is seen to have amazing backgrounds and animations of food. These are exactly what I would expect from a collaboration between CoMix Wave Films and Haoliners Animation League. CoMix might sound familiar as they were the production company for the award winning movie, Your Name.

This Japanese-Chinese co-production was based around the Chinese idiom 衣食住行, yī shí zhù xíng. This idiom means clothing, food, housing, and transport. It denotes the basic needs of life. The movie focuses three stories around this idea and how mundane things can have huge emotional importance for the characters.

The first story, directed by, Jiaoshou Yi Xiaoxing, explores that. It depicts a young man who seems to have lost a flavor of ramen

he had as a child with his grandmother. It explores his life through the dish and the different places he orders it. This story had the potential to rise and really set a high standard.

However, an unneeded, slightly creepy, unrequited love situation prevents that. Despite this, the grandmother and ramen aspect of the story was enjoyable and even got me thinking of past dishes like my Granddaddy’s applesauce. A flavor that when tried, can bring you back to your childhood.

The second story, directed by Yoshitaka Takeuchi, is plausibly the weakest vignette. It is focused on two sisters who have lost their parents. This story fails to mention or even show key details that would allow you connect with one of the sisters.

The connection to China and nostalgia get lost along the protagonist’s journey of being a model. Ultimately it comes off more of a saccharine sitcom kinda ending than one grounded in nostalgia. This was the only section handled by a Japanese director; which could attribute to the different atmosphere this one gave off considering the movie is based on growing up in China.

The third and final story is directed by Li Haoling, a director who is known for incorporating smooth yet rich animation to many of his works. It focuses on a young man who moves back to Shanghai after many years of being away. He finds an old tapes him and a young love sent to each other and through them they reconnect. However, this one had many stereotypical scenes that never really seemed fully original. It just wasn’t the masterpiece I expected from Haoling.

Flavors of Youth falls short in not only story but sometimes animation as well. The movie seemed very focused on backgrounds.

The cities and towns were simply amazing throughout the film.

A risk that comes with extensive detail in backgrounds is loss of focus
on the characters themselves. This became clear throughout the film, especially
if compared to CoMix’s animation work on Your Name.

One thing that does need to be considered is this was a co-production. An issue that can commonly unknowingly come up is difference in artistic views. While only slight, this can be seen in the three different stories, all of which were handled by different teams.

While this is more effective and time efficient it does come with its issues. This can be seen in inconsistencies in the overall artistic vision and slight difference of atmosphere in the three stories. Many times it was the soundtrack that helped set the atmosphere.

By no means was this a bad film, it just didn’t own up to either of the production staffs previous work. Another huge factor is the fact this was both translated and edited into an ‘international edition’. There are few changes in the story itself, the language doesn’t always translate best it could.

While there were many discrepancies in the film it did do an amazing job of quickly taking you through three lives in different Chinese cities. The animation flowed very smoothly and while the characters didn’t match up to the background it wasn’t anything that took away from the films enjoyment.

Overall, the film did a superb job of exploring showcasing Beijing, Guangzhou, and Shanghai through three lives. This insight, while not as intimate as the production staff had planned for, did do its job it making the viewer nostalgic.