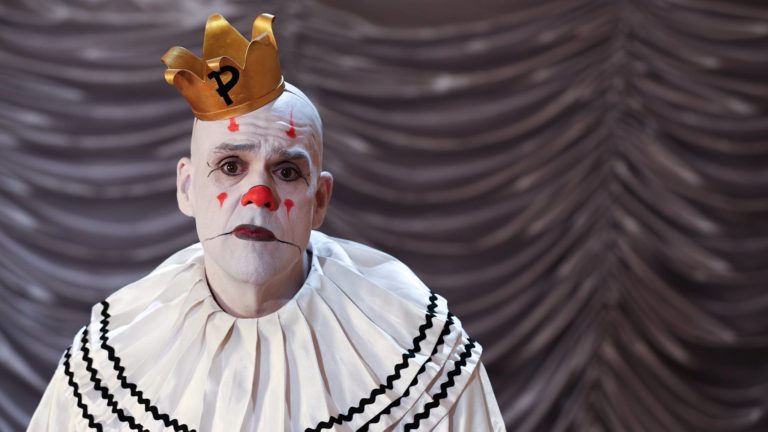 Puddles the Clown took the stage at the historic Englert Theater last night in a truly astonishing fashion. With everything from physical comedy, audience participation, and a wickedly powerful yet beautiful voice, Puddles owned his performance.

The environment of this concert was something I never have experience before. It was filled with both a heightened sense of excitement, but also a large amount of playfulness. This sense started when Puddles walked all around the balcony, and floor seating before the show started. He took the time to shake hands, greet, and hug as many people as he could before he took the stage.

This adorable act of love and kindness was something to behold, but I was happy to see how Puddles made it a point to shake hands and thank all the Englert’s ushers and workers before beginning his show.

Once the show started, Puddles started with an onslaught of hilarious physical gags that caused the audience to be in humorously tense anticipation, with people calling out from the audience through out to support the clown performer.

The amount of time Puddles spent taking audience members to the stage and including them in on gags and his powerful performances was something I was shocked and delighted to see. The way he graciously greeted and treated all the participants was something that warmed my heart.

The audience was definitely a great aspect of this concert, with nonstop love being shouted at the stage. The cheers of joy when seeing Puddles accomplish something as wacky as skidding a stool across the stage was something that made the show a warm place to be.

The main aspect of this concert that made it great was Puddles’ amazing voice. I have never heard someone carry such a beautiful tone in person before. His voice created a wall of sound that wrapped around you in a way you never knew a voice could.

He was also extremely expressive when singing. Not only putting in the occasional gag, but to see the real emotions these lyrics were bringing out of this white pastel face performer. The huge presence he brought physically was minor compared to the mammoth size presence of Puddles’ voice.

Hearing songs such as Pinball Wizard, Royals, and REM’s “Losing my Religion”, was something I was so excited to hear in person. I have been a fan of Post-Modern Jukebox for a while and thus became a big fan of Puddles, a frequent collaborator.

Hearing these songs be sung by someone with such a new style and powerful voice definitely added a new depth of love for these songs. For anyone who has not looked into Puddles the Clown, I highly recommend him. His music covers all generations and his voice will find a spot in your heart that you never knew you had before.

For some videos of his songs see the links below.