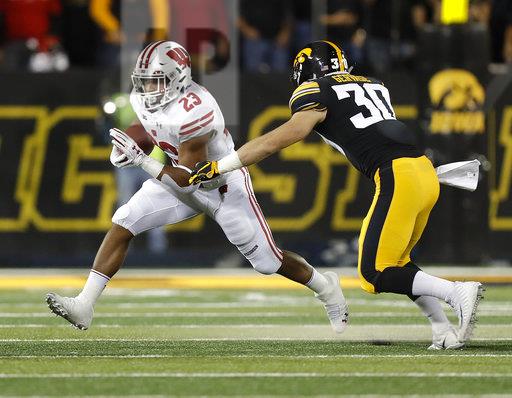 It just wasn’t so for the Hawkeyes on Saturday night.

They fought valiantly in their Big Ten opener, but unfortunately they fell short to Wisconsin (3-1, 1-0 in Big Ten) 28-17.

Ultimately, it was two big special team blunders and a long Badger drive that cost Iowa (3-1, 0-1 in Big Ten).

Both were fumbles, the first one was knocked out of Kyle Groeneweg’s hands the second came courtesy of Shaun Beyer’s foot inadvertently grazing the ball before being recovered by the Badgers.

It was the latter one that stung the most for the Hawkeyes as it set the Wisconsin offense up in the red zone and they capitalized with a touchdown.

“We made some critical errors,” coach Kirk Ferentz said. “If you’re going to win in the Big Ten you’ve got to play cleaner football than what we did tonight.”

The game started in the typical rough-and-tumble play that is to be expected when these two teams meet.

Both teams scored touchdowns in the second quarter, Wisconsin on a 6-yard pass and Iowa on a 20-yard pass from Nate Stanley to Noah Fant to make it a 7-7 tie going into half time.

It was Iowa who came out strong to start the second half, kicking a field goal on their first drive, then after Wisconsin put up 7, the offense rallied again once again on a Stanley to Fant connection that made it 17-14 heading into the fourth.

All game long the Hawkeye offense seemed to be grooving to the tune of the Kinnick faithful.

Stanley put up 256 yards with two touchdowns and only one pick, Ivory Kelly-Martin returned after missing the previous two games with 79 yards on 14 attempts, and T. J. Hockenson had a big night catching three passes for 125 yards.

But the grooving stopped I the fourth.

The same Iowa offense that had put up 332 yard in the first three quarters, managed just 72 in the fourth, 27 of those yards came on a meaningless last-second play.

Perhaps the most disappointing blunder for the Hawkeye offense came on their first drive of the fourth quarter, when Stanley missed a wide open  Hockenson on first down.

“I just missed that throw,” Stanley said. “I think that would’ve set the tone for a good drive because he would’ve caught it a ran for a while. That’s definitely one I want back.”

Instead of the drive starting out with a big gain, the Hawkeyes were forced into second and long, then a three-and-out.

That made way for the Badgers to do their damage, and they did just that.

With 5:40 to go Wisconsin got the ball on their own 12 and put together a steady drive which took them all the way down the field and ended with a 17-yard pass from Alex Hornibrook to A. J. Taylor to put Wisconsin up 21-17 with 57 seconds to go.

“It hurts,” Safety Jake Gervase said of the loss. “When you play as hard as you can for sixty minutes it hurts. We got to play better. Credit to Wisconsin they played better tonight in all three phases.”

As always, Ferentz will allow the players 24-hours to get over this game and then its on to the next.

Iowa has a bye week next weekend, but they will travel to Minnesota on the 6th of October at TCF Bank Stadium.