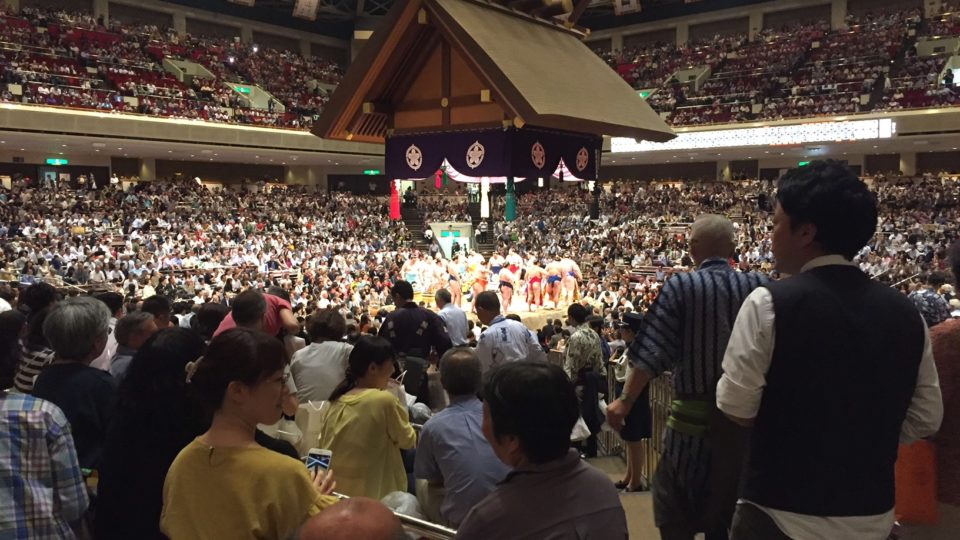 Sumo is, perhaps, one of the more misunderstood sports. I first became aware of this as a child, when a fellow child asked me, “Why do Sumo wrestlers wear diapers?”

Since that rather unfortunate question, I’ve held a decent amount of respect for sumo, though I did not actually start enjoying the sport until about one and a half years ago, while watching twenty-minute clips of sumo highlights on YouTube every tournament with my dad.

And now, being in Japan, I finally got the chance to go watch the sport in the flesh—let me take you through an average day of sumo for your average foreigner.

What is sumo? At first glance, wrestling. Upon further investigation, an ancient Shinto-based ritual sport drenched in history. In its youth (“youth” meaning before 1000 A.D.), sumo supposedly had a prophetic function for the year’s crops, until it gradually accrued popularity as a pure sport—famous warlord Oda Nobunaga called sumo wrestlers from around the country for tournaments. And then at last sumo became an established entertainment sport during the Edo period (1600-1867), molded into its modern form.

The basics of the game is for two rikishi (wrestlers) to wrestle until one either hits the ground with any body part other than their feet, or steps outside the rope ring. A rikishi can win by several means, or moves, including “force out,” “slap down,” “over-arm throw,” etc.

There are six tournaments, or Basho, per year—one for each season, and two at Nagoya and Kyushu, respectively. The seasonal basho take place at different locations around the country, including Osaka and Tokyo, starting and ending on a Sunday, lasting two weeks.

(for more detailed information, check this out)

The basho that I went to was the Summer Basho, held at the Kokugikan in Tokyo. I had originally wanted to order a good seat online, but Alas! I was too late. And so the only option left was to get “Day Tickets” (toujitsu-ken), about 23 bucks, which you can only acquire by lining up outside the Kokugikan, just a two minute walk from the Ryogoku train station. At dawn.

And so, after boarding a train at 5:40 in the morning and arriving an hour later, I ended up 93rd in line.

Another hour’s wait later sitting on the sidewalk, it was finally time to purchase our tickets.

The thing about the cheapest tickets is that, though they require the most effort, they get you seats the farthest away from the main arena. It’s a flavorful mixture of extremes—but it also makes for a great experience.

about seven hours to kill by watching rookies, exploring the Kokugikan, eating, or sleeping (I did it all). I definitely recommend the eating. The food vendors boast a delectable box of yakitori (chicken kabobs), a variety of lunchboxes, ice cream, and other snacks/meals to keep you nourished and entertained throughout the day.

At about 2, you can get out of the building and line up around one of the gated entrances to watch the top rikishi come in with their attendants. After many long minutes of standing among other sweaty people, handkerchiefs on their heads, fans flapping, and camera at the ready, you finally get to see the sumo wrestlers begin to saunter in, clad in yukata and

sandals, stoically gazing ahead as fans shout their names (“Endo!” “Tochinoshin!”), and non-fans ignore them. Then it is time to return back to the arena.

When the arena is the fullest, and excitement is at its apex, and people are furiously munching at their French fries, the bouts between the top rikishi begin.

The neat thing about sitting all the way in the back, is that you can see the variety of people that come to watch. Foreigners, couples, families, old men, middle-aged women, and bands of middle-schoolers there for a school trip. Perhaps one

of the things I’ll probably remember the most is how the different middle schoolers had a competition trying to cheer for their rikishi the loudest.

Two hours later, you’ve finally seen the Yokozuna (the top of the top) finish their bouts, and then it is time to go home.

Perhaps the next best thing to watching sumo in person, was watching the people who came. I was surprised to see how popular sumo is still to people of all ages and countries, to form a rather cozy little community for the day within the Kokugikan.

All photos were taken by author