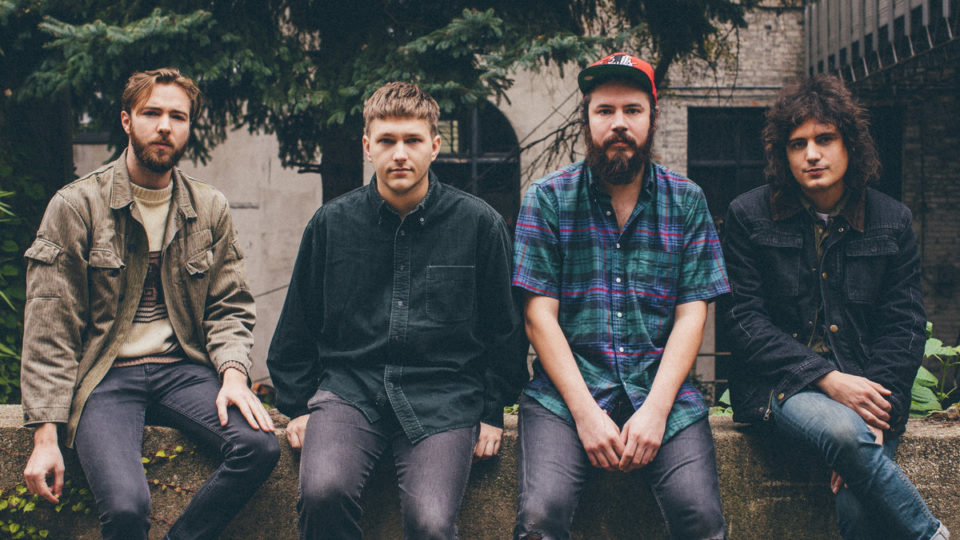 Hi all! Sorry that it’s been a hot sec since I’ve written, the past month has been a complete whirlwind! I am so glad to be out of school and into summer. I haven’t done much thus far, but still. At least I’m done with financial accounting! *fist pump*

This will be my final article as I am going to be transitioning into the position of Head of Marketing for KRUI! I have loved my time as a journalist and having the opportunity to review all of the great music I have, but all things must come to an end. This last column will be a review of NE-HI’s debut album, which is titled -*drum roll*- “NE-HI”! I am so glad this happened to be my final review, because I’ll definitely be going out with a bang! Let’s get the bean rolling!

“I guess I would say rock and roll or indie rock…my favorite bands are Twin Peaks and NE-HI, which is a band from Chicago and I’m super stoked about them. I like The Rolling Stones and a lot of classic rock, like The Beatles…not like Def Leppard or ACDC, I’m not into that, but for example, The Rolling Stones, they’re really mellow and I like that. The Velvet Underground is really cool too!”

How long would you say you’ve been listening to this genre?

“Kind of…forever, really. My dad is super into The Beatles and The Rolling Stones, and this band called The Band, which was Bob Dylan’s backing band way back when, in the 60s, I guess. That’s probably what got me into the genre. I used to like rap a lot. My favorite rapper used to be 50 Cent, like ‘The Massacre’ was the first album that I ever bought with my own money, in third grade. I found out about Twin Peaks in high school, probably during my junior year, so around six years!”

“I listen to a lot of everything. I’ve been listening to Frank Ocean a lot recently. I also like a lot of modern R&B like SZA, she’s really cool. I still like rap a lot! I work at a liquor store and while I’m there, they always play rap because that’s what’s popular, so I hear a lot of Migos. It’s not really my ‘thing’, like I don’t listen to it for enjoyment outside of work, but it’s kind of fun. Gucci Mane, Wiz Khalifa, that kind of stuff is outside my realm, but I can dig it.”

“What I had in mind was NE-HI’s debut. It came out a few years ago and it’s just self-titled. It’s super good. I don’t know if you’ll necessarily like it, but I’m a big fan of their sound.”

How long have you been listening to this band specifically?

“In October, it’ll be four years. I actually saw them open for Twin Peaks here at some venue and I was kind of blown away. I just felt like it was really relaxing and like I was on a beach. It kind of feels like good summery music to me. It’s really laid-back, structured, and the guitars are really buzzy, kind of giving it a crunchy sound. The vocals for it…they’re not good singers per se, but I don’t think that really matters. I think the music really matters and it just sounds really fun to me when I’m listening to it. They also have their ‘tender’ moments on the album. It’s good and short, it’s only a half hour.”

Shoutout to my ~bro~ for letting me interview him during his final finals week, and congrats on graduating! I hope you do more than sit in a dumpster and eat garbage…

So, as he mentioned, NE-HI is a group from Chitown, made up of four people; Mikey Wells, James Weir, Jason Balla, and Alex Otake. The band formed in 2013 after coming together to score a mutual friend’s film and just decided to stick it out. It seems to be working for them, based on what I’ve heard!

NE-HI has released two EPS, one of which I will be reviewing right here in just a few moments, and four singles. If you want to check out their site, here’s the link!

I listened to this album while studying for finals because frankly, I knew I would have no other time to get through it. I think it’s partly the reason for me passing financial accounting, so shout out to these dudes for getting me through it! Per usual, I’m going to review my favorite song, my least favorite song, and then the album overall. Let’s start off on the right foot.

My favorite song in “NE-HI” was “Since I’ve Been Thinking”. It’s the first track and really kicked my experience off in the right direction. I absolutely love the guitar in the intro and the background throughout the song. There isn’t a lot of lyrics in this song, just a chorus that’s repeated here and there, but otherwise, a fairly vocal-less song. I think I like its’ simplicity. It kind of made me feel like it’d be in the background of a Lindsay Lohan movie circa 2006. I’ve posted the lyrics below, along with the link to the song. Seriously. Think about Lindsay Lohan and it’ll come to you.

My least favorite song on this LP was the third track, “Time Wanna”. I don’t know why, I just wasn’t feeling it. There’s literally no other explanation. It still has that summer-chick-flick-background-feel to it, but I gave it a 6.5/10 and every other song had an average of a 7.5/10, so…this one was the least favorite! There isn’t a music video or lyrics posted anywhere, so if you’re desperate to listen to it, get to digging!

Overall, I really, really enjoyed this album. It has a laid-back feel to it and I cannot shake the dramatic film scenes that it would work perfectly in from my head. If you’re interested in listening to the entire album, here’s the link. I really recommend that you do. It’s a short one, it goes by fast, and you won’t regret it!

Final notes from my interviewee:

If you or any of your friends want to join my marketing team for KRUI during this upcoming semester, do not be afraid to reach out! My e-mail is bvolfson@krui.fm 🙂 I look forward to hearing from you!