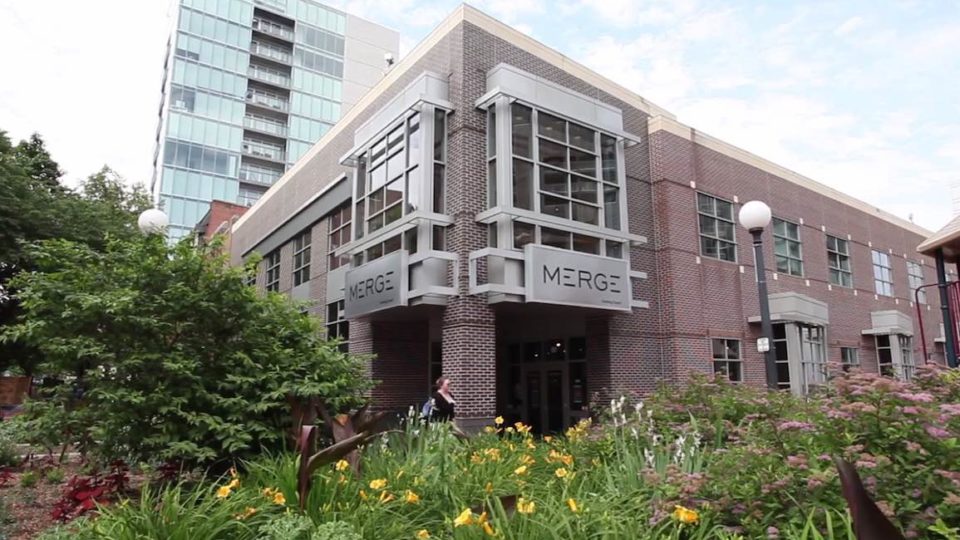 Siya Mali is a South African living in Iowa City.  Mali’s experiences here as an immigrant inspired him to explore the ties between Iowa and the rest of the world.

But looking wasn’t enough, he wanted to do more.

That drive to unite local and international communities led to the creation of MERGE:Homeland to Heartland, his show that airs on KRUI Radio every Thursday from 12 to 1 p.m.

Through commentary on global business and conversations with local leaders, Mali sheds light on the forces bringing our cities, counties, and countries closer together.

We recently collaborated on new a segment featuring entrepreneurs with offices at the MERGE Innovation Space in downtown Iowa City.  Last week, Anthony Odele (pronounced ‘Oh•DEL•lay’) sat down for our first interview.

Odele is the co-founder of Ovolv3, an electronics company that promotes the sustainable repair and resale of portable devices. He is also a first-generation American and former Division 1 student-athlete.

Our conversation touched on Odele’s Nigerian roots, sources of support, and advice for aspiring entrepreneurs.

I’ll note my favorite points from each of those topics, but you can also listen to the full conversation here.

Odele’s father, Manny, left Nigeria for Italy during the 1980s. While there as a foreign ambassador, he took classes in the growing field of computer science.

They sparked a passion.

One of his professors advised him to complete his studies in the US as their curriculum was the most advanced at that time.

From there, Manny migrated to Oklahoma, completed his Master’s degree, and fell in love with an American woman.  After school, they started a life together in Illinois.

Their first of five children was Anthony Ayo Orishe Odele.

Next came Jolli, his brother and the eventual co-founder of Ovolv3.

Family and God sit at the foundation of Odele’s life.

Before going into business, the siblings learned how to repair electronics from their father. Those lessons paved the way for the company they would later create.

Anthony developed his working knowledge of tech as a teen by taking apart gaming consoles whenever they broke down.

Jolli honed his business chops by reselling shoes he bought off eBay.

Both the brothers went to Western Illinois University together. While there, their skill sets harmonized.

Whenever mutual friends ran into phone problems, they turned to the Odeles. Anthony would patch the issues and make some quick cash.

As requests for service increased, Jolli recognized an opportunity to go beyond boutique repairs. It could be a business.

The younger brother played salesman in the short-term but had dreams of buying used phones in bulk to repair and resell. That goal required capital. So, he grew the client base in response.

They went from repairing ten phones a week to twenty. Then fifty. Then a hundred.

Soon they could afford to go outside their network and purchase damaged electronics by the thousand. They had climbed the first mountain and now saw the next peaks to be reached on the international market.

In addition to his background as a computer scientist, Manny Adele is also a pastor. The spiritual foundation at the core of his parenting instilled a deep reverence for a higher power into Anthony and Jolli.

For Anthony, spirituality transcends the stereotypical worship of a bearded man above the sky. Instead, he believes we are all better served by recognizing something as greater than ourselves.

This principle rests at the heart of the business model behind Ovolv3.

While other electronics resale companies tend to operate without regard to the transparency or sustainability of their practices, Ovolv3 is upfront about exactly how much money customers will receive for trading in their devices and where their devices go after they are exchanged for cash.

Odele emphasized two things for anyone who wants to start a business: build a strong network and develop a tolerance for risk.

During his years as a graduate student at the University of Iowa, Odele formed an important relationship with Yiannis Assimakopoulos and Jackson Zapata—the owners of Bardot, a bar in downtown Iowa City.

At the time, Anthony was still supporting himself by working at a local pharmacy. They sparked the realization that he couldn’t just help build the dreams of others for the rest of his life. He needed to create a kingdom of his own.

Soon after meeting that pair, Jolli joined Anthony in Iowa City to complete his studies. From there, the brothers continued to build their network by taking a separate business concept through the UI Venture School.

Today, the Odele brothers work alongside a community of other entrepreneurs with offices at the MERGE Innovation Space in the heart of Iowa City.

The path between Venture School and MERGE was paved by taking risks.

The first of which involved pivoting away from the new retail concept the brothers experimented with while at Venture School.  They instead went back to their core competency: electronics.

However, they needed more connections in that field.

So, the brothers gathered the money they had and started taking road trips to relevant conferences and industry meetups around the country.

The relationships they formed produced crucial contacts once they started looking for wholesale vendors and bulk buyers later on.

Young entrepreneurs can use this same strategy to cut down on travel costs when starting their own company.

Lastly, Odele shared three books that helped him with calculating his risks:

Zach Harris is a senior studying English and Media Entrepreneurialism at the University of Iowa.