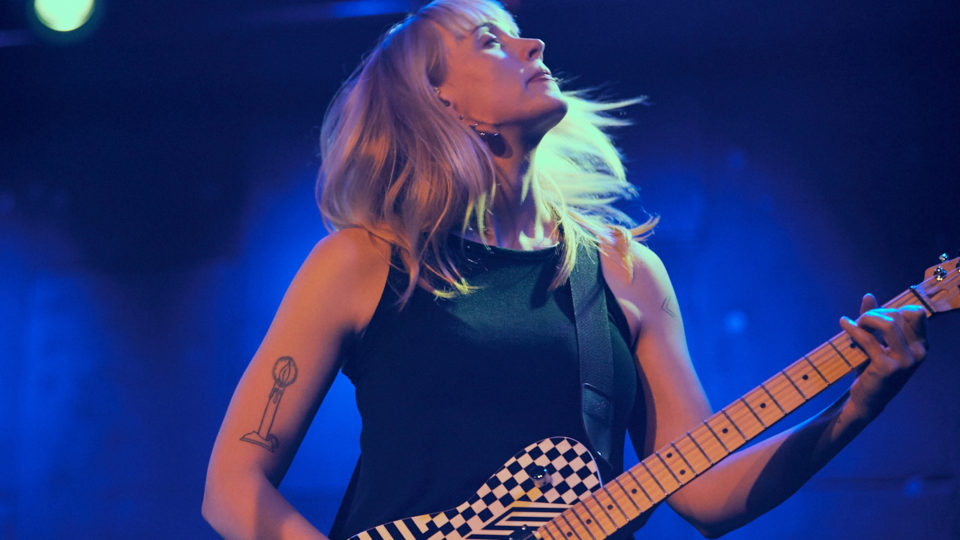 So about twenty minutes before the Wye Oak concert kicked off last night, a roadie cranked up a fog machine to what I could only assume was the maximum setting and then just… left it there… for the remainder of the show. I’m sure the intent was to create a mysterious, ethereal atmosphere. It was unsuccessful.

Visually, the out of control fog machine created an effect reminiscent of the kind of off-grey smoke that might fill your kitchen after you burn your toast charcoal black.

Additionally, it made me think of the cars of certain friends and coworkers who can’t go ten minutes without taking a rip off their “Mango” JUUL. Yeah. It’s hard to get into the proper mystical indie rock headspace one would associate with Wye Oak when the fog machine somehow made the entire Englert smell like fruity vape clouds.

Why bring up the whole fog machine fiasco?

Well, in my opinion, it’s symbolic of the problems that came with Wye Oak’s Mission Creek performance as whole. Before continuing on that point, I will take a moment to say that I hold Wye Oak in high esteem.

It firmly remains my opinion that they’re one of the best, most inventive indie rock bands of the 2010s. I still stand by everything I said in my preview for their performance.

But their show at the Englert Friday night was… disappointing.

And it’s not for lack of putting in a good performance on Wye Oak’s part; Jenn Wasner was in full, lovely voice, as usual, and the backing artists brought the kind of roaring sounds any fan would expect from the group.

So what went wrong?

Well, like the cranked-up-to-11 fog machine, a heavy hand on the technical side of things spoiled what should have been an exhilarating performance.

On record, Wye Oak is a band noted for their dramatic dynamics and bold foregrounding of Wasner’s distinctive contralto vocals; on stage at the Englert Friday Night, a muddy mix obscured these dynamics.

My guess is that the stage technicians cranked up the levels to accommodate subdued opening act Margaret Glaspy, and then neglected to adjust them downward for the much louder, more aggressive Wye Oak, because their sound was redlined beyond all recognition.

Where the line differentiating quiet and loud should have been clear and Wasner’s vocals brought to the forefront for the audience to enjoy, each element in the mix was made so equally, blaringly loud it was hard to discern which was which.

Most disappointingly, Wasner’s voice — and the thoughtful, emotive lyrics she sang — were completely buried in the mix.

Save for the number of songs they played whose lyrics I knew by heart — personal favorites like “Civilian,” “Spiral” and “Holy Holy” — I often could not tell what she was singing at all.

Let me be clear: I’m a dear fan of this band.

Again, the fault didn’t lie in their songs or performance. I want to stress my disappointment stems from the fact that they were done a disservice by the acoustics and mixing that were in place when they took the stage, because poor production can and will spoil the most talented of acts.

It’s hard to say what went wrong and why given that the Englert has produced excellent rock shows before and that Wye Oak has performed them.

Whatever the cause, a dynamic band like Wye Oak ultimately deserves better than a mix that flattens their subtle quiet moments and roaring highs alike into a monolith drone.

And a gifted singer like Wasner absolutely deserves better than a production that buries her vocals into oblivion.

Unfortunately, however, that’s the mix that they — and the audience — got Friday night. Wye Oak remains, indubitably, a talented act. Let’s just hope the next time they come to Iowa City, they’ll be treated to a level-handed mix that will let these talents shine.