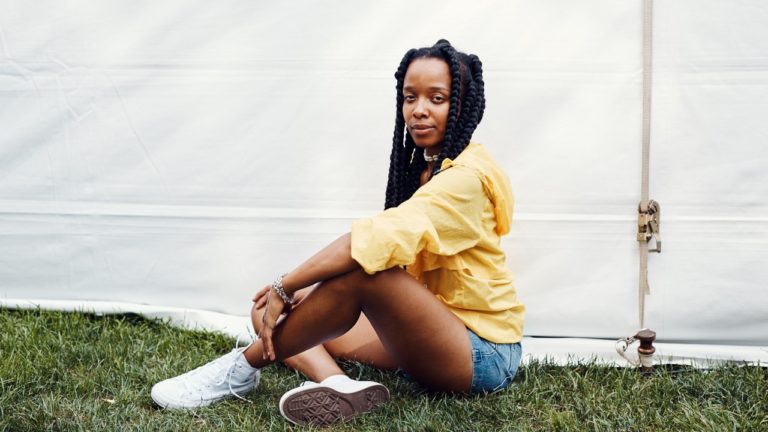 Hailing from Chicago, singer-songwriter Jamila Woods will be in the Englert Theatre at 9:15 on Sunday, April 8th as a part of Mission Creek Festival. General Admission tickets are $15 and the ticket includes access to Ancient Posse at 7 PM and Psalm One at 8 PM.

Born and raised on the south side of Chicago, Woods used her love of poetry to launch her music career. Woods attended an online University and graduated with an online bachelors degree and Performance Studies.

Woods’ inspirations include everyone from Erykah Badu to Kendrick Lamar. Woods’ beginnings singing in her church choir and her love of hip-hop influenced her musical style which incorporates traditional R&B with sampling and layered choral arrangements. All of this just serves as background to Woods’ beautifully smooth voice and crafty lyrics, however.

Woods is perhaps most well-known for her collaborations with Chance the Rapper on the songs “Sunday Candy” and “Blessings” from the rapper’s 2016 mixtape Coloring Book. Woods has also been featured on Macklemore & Ryan Lewis’ song titled “White Privilege II”.

One of the biggest songs of 2015, “Sunday Candy,” features Woods’ iconic hook interspersed between verses from Chance the Rapper as she says: “I’ve been waiting for you for the whole week/ I’ll be praying for you you’re my Sunday candy”.

Heavn, the debut solo album from Woods was released in 2016 to rave reviews from critics.

The way that Woods delves into heavy and political topics while maintaining the message through finely produced and upbeat songs is incredible. Woods’ voice is unmistakably unique and cuts through each track like a hot knife through butter.

The title track from Heavn features sputtering piano and drums that open the song until an upbeat and beautiful rhythm is unveiled and Woods opens the song with an interpolation of The Cure’s “Just Like Heaven,” by saying:

“Show me show me show me how you do that trick/ the one that makes you love someone”. The song, while upbeat and catchy is actually about slavery, black history, and black love.

“Heavn,” is a quintessential example of how Woods can balance catchy songs with heavy-hitting lyrical topics. Her voice allows her this freedom and the contrast in her songs is stark.

The show at the Englert is sure to be a must-see for everyone, from hardcore fans to those that may have only heard one of her features on a song. She’s that great of a talent and is sure to impress.