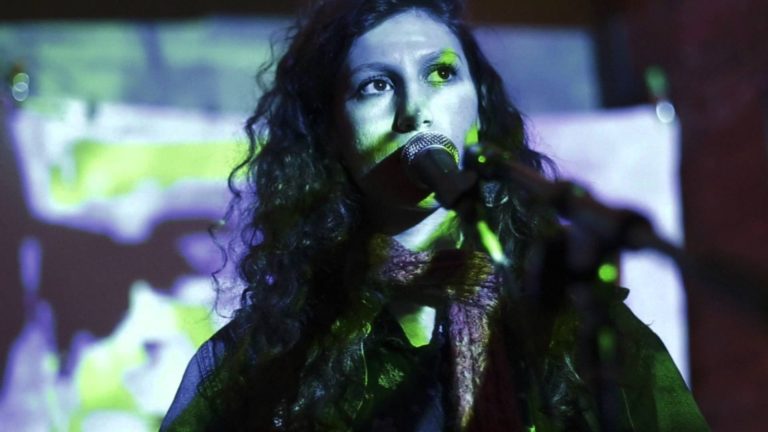 If you live in Iowa City and are free April, 7th at 9pm go on down to Gabe’s. Squirrel Flower will be playing a great opening performance and you won’t want to miss it.

Ella Williams, who goes by Squirrel Flower for her solo project, is based in Grinnell, Iowa, as well as Boston. She grew up in Boston and now lives, sharing time between, Grinnell and her home city.

She writes songs that are calm and melodic and make you feel deeply while listening along.

Her sound has a very distorted guitar and an angelic vocal sound. She has an album Early Winter Songs from Middle America that was released in 2015.

Her newest release was her EP, Contact Sports (2016). The EP features “Conditions” a great single that is her most played song on Spotify.

Williams says, in an interview on Gardner Sessions (through Grinnell College), that she was really inspired by the change of environment that moving to college brought. She says that changing environments is not always positive, but can be when you are making art.

Which is what she has done. She grew up in a choir and has been influenced by the choral style of singing, mixed with the experimental scene later discovered as a teen in Boston.

With the idea of change in environment, it is important to add that her music really reflects that feeling. Her albums, especially Early Winter Songs from Middle America, have a wavering sound of nostalgia. They sound light and reflecting.

The music makes you want to cry and her voice adds to an overall feeling of missing something, but also enjoying a new life in a new place. Squirrel Flower is able to really master the feeling of sweet bitterness. It is something everyone can relate to, especially after moving away from home as a young adult.

I wanted to feature some of my favorite songs off of her albums.

Early Winter Songs from Middle America (2015) really fits the nostalgic feeling, that she was so inspired by originally, through a more simple sound:

“Train”–  The sound of the guitar is melancholy and soft, which mixes with the clear feeling in her voice. This song fits the bittersweetness of missing home most to me.

“Open Door”– Her voice sounds more sweet, going along with a happier sound, but still sticking with a nostalgic feeling. The lyrics are about moving away from home, fitting the theme.

“Conditions” – This is her most played song on Spotify and for good reason. It features a distorted guitar and her classic sweet sounding voice. This song doesn’t feel sweet though, you can tell there is anger behind the passion of the song.

“Not Your Prey” – Squirrel Flower’s voice is more prominent in the opening of this song, as the music gains a heavier, rounded sound. The song goes in and out of crescendos.

Although these are the songs I highlighted, I recommend listening to all of Squirrel Flower’s music. Every song is very relatable and mesmerizing at its core.

I will be going to see Ella Williams, as Squirrel Flower, on Saturday, April 7th. Gabe’s 19 and over show will feature Squirrel Flower and Julien Baker for $20 general admission. See Mission Creek Festival’s whole lineup here and don’t miss out on a show that is bound to be entertaining and meaningful!