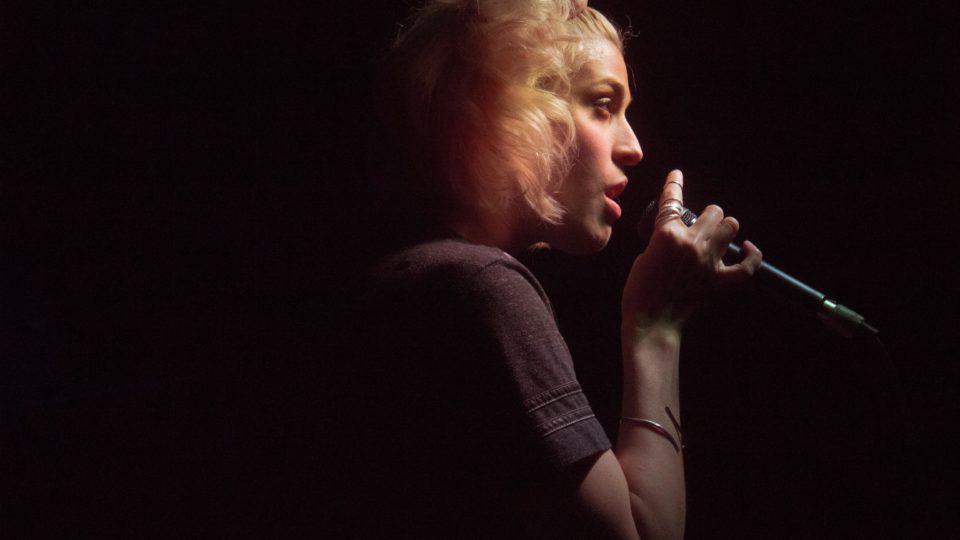 Oh. My. Gosh. Tonight, I had the opportunity to go review Dessa’s performance, and boy, am I glad that I did it!

It was absolutely amazing, I had such a good time! No need to feel the rush of FOMO, because I’m going to tell you all about it.

So to kick it off, Dessa started about fifteen minutes later than expected, but it was no big deal because Monakr was killing it on stage!

She came out in an army green jacket and some combat boots, looking super cute, beer in hand, and announced that Monakr would be staying on stage and playing along beside her! I thought that was really cool because they had been doing so well before her.

Turns out they’re on tour with her this spring, so it makes sense!

I’m going to be honest, I was worried that I wouldn’t be able to understand the lyrics as I was standing right next to the synthesizer amp, but she must be extremely articulate because I got the gist of most of her songs!

The first song that Dessa performed was “Skeleton Key”. I’ve attached the link below for you to listen to in case you weren’t able to be in attendance tonight.

I really like the use of piano throughout the song! I feel like in this day and age, the only person who consistently uses the instrument is Sara Bareilles. It was a refreshing sound, that’s for sure!

As the performance went on, I may have accidentally stopped paying attention to my duty as a journalist and started to participate like I was a concert-goer, dancing, etc., so I don’t remember all of the song titles, but there are two others that really stuck out to me.

One of my favorites that she performed was “Dixon’s Girl”. It’s got kind of an Amy Winehouse sound to it in the background. See what you think!

The other song that I really liked was “Fire Drills”. I think it’s because it has a Middle-Eastern sound to it with the strumming of an oud (I believe it is, at least), which is a type of round guitar! It also demonstrates Dessa’s rap skills.

She’s not just a singer, she’s a rapper, too, and a good one at that! Her lyrics actually make sense and flow together really well. Give it a listen, you will not regret it.

So, yeah, those were my top two favorite songs of the evening, but you can check out the record label that Dessa’s signed with, Doomtree, on YouTube here to listen to more of her stuff!

She is completely original. Her physical appearance kind of reminds me of Lady Gaga, but a more-down-to-earth Lady Gaga, you know? As far as vocals goes, sometimes she had a Miley Cyrus sound, but it wasn’t consistent, so I have come to the professional conclusion that Dessa is an utterly unique artist, which is hard to claim.

She was just her and didn’t want to be anyone else, and I think that’s hard to find today. She raps, she sings, she covers all types of genres, and most importantly, she has a good time.

I have major respect for that.

Dessa as a human being is so funny. In the photo above, you can see her drinking what looks like beer. The story behind that is absolutely perfect.

While performing, instead of reaching down to grab her own alcoholic beverage, she reached out and grabbed someone’s drink who was standing in the front row. She took a big gulp, smiled, and handed it back. Turns out, it was not beer as she had expected, but apple cider. How funny! I hate when that happens, so I feel you, girl!

Another great moment during the show was when she called a photographer out (not myself, sadly) and made him come up on stage to take a posed photo because she recently dyed her hair blonde and washed it for the first time today, and it “felt like bread”.

She needed him to take this one shot of her pretending to perform so she’d look good for whatever type of media he worked for. It was hysterical!

By the way, might I add, I love her hair. Super cute. Anyway, yeah, she did quirky stuff throughout the entire show like toss her hoop earrings to the ground behind her, gave advice to “hetero-men dating hetero-women” about rap music, and took someone’s phone in order to record herself. There’s a photo of that moment below!

At the end of her show, there was a predictable encore, of course. Just in general, I’m kind of over the encore aspect of things, because everyone knows it’s gonna happen!

Soooo…just stay on stage and do another song. It’s like a surprise party, but you know it’s happening. It’s still fun but the moment is kind of spoiled.

Overall, Dessa put on a super fun show. The atmosphere was intoxicating because she had a real fan base. I guess she’s been here before!

I definitely will not miss out on her again. She’s a talented artist and a pure person. She’s not fake and trying to please everyone, she’s just doing her, which I think is so admirable and important. If you want to check out her Instagram, give her a follow here!

Little side-note; all of the photos in this column were taken by yours truly. I had to decrease the quality in order to upload them, so if you want to see more, check out my photography Instagram here! I would really appreciate it. 🙂 This was the first show I’ve ever shot and I hope to do more in the future! Maybe my next review…? Stay tuned!

PS. I just wanted to say. The lead singer/keyboardist of Monakr is super hot and looks like Adam Levine. That is all.