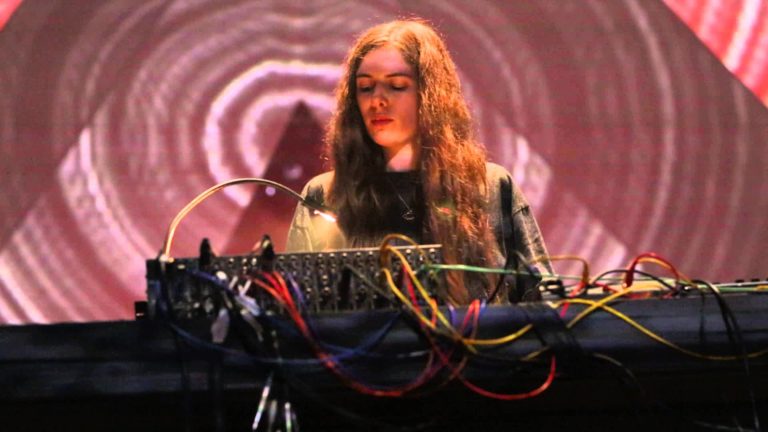 Halo will be performing twice in Iowa City, her first act being on Thursday night at the Yacht Club starting at 10:30 PM.  She’ll be performing her tracks live, which will make for an exhilarating experience seeing how Halo transitions from the studio where she does the bulk of her work to the stage.

On Friday night, she’ll get to showcase her music as its intended as the songs will be pre-recorded on a DJ set list. This performance begins at 11 PM in the Yacht Club.

Halo’s journey is an interesting one.  She grew up in Michigan, a state full of musical history as it introduced the world to Motown in the 1960’s and brought back rock n’ roll in the early 2000’s with the garage rock of the White Stripes.

Hailing from Ann Arbor, MI, Halo learned how to play instruments such as the piano, guitar, and violin.  From there at age, 19 Halo began composing music on her own. She drew inspiration from Detroit dance parties she attended, her experience in jazz ensembles, and her time as a free-form DJ at the University of Michigan’s radio station WCBN.

Halo’s musical taste is also influenced by classical theory and the writing of acclaimed science fiction writer Phillip K. Dick who’s known for themes of altered states of consciousness and authoritative governments.  Halo’s latest album, Dust, sounds like a sheet of music straight out of a science fiction film.

Once Halo established herself as a young composer, she decided to put her work out for public consumption by releasing several EP’s from 2006 to 2009, but really got the ball rolling with her 2010 EP, King Felix, which was released by the New York experimental pop label, Hippos in Tanks.

Coincidence that the Hippos in Tanks label itself was heavily influenced by Dick’s 1981 novel VALIS?  I think not.

After working for the record label, Halo was able to collaborate with more musicians similar to her taste, and in doing so recorded an electronica album with four other musicians titled FRKWYS 7.

Halo learned from peers in the New York avant pop music scene, and as a result, she released her breakthrough album for a different, more prestigious label in London, Hyperdub, titled Quarantine.

Her first album for Hyperdub garnered critical success with the Wire naming it the No. 1 album of 2012, saying “Halo’s confidence with melody and her deftly written and direct, often harshly vulnerable vocal lines raised Quarantine above the vague techno-dystopian mood that permeated much of 2012’s electronic music.”

After the success Halo took her talent and focus to Berlin hoping to take in the city’s rich musical history as an inspiration for future music.  This isn’t the first time a critically acclaimed musician moved from the States to Berlin, as David Bowie ventured to West Berlin in 1976 and there the rock star ignited a paradigm shift on his style by exploring electronic and ambient music; Halo was looking to do the same.

From there, Halo went on to collaborate with more artists, many being musicians outside of her bubble of electronic pop.  She then recorded two more albums with Hyperdub, her latest being the moody, disorienting Halo released in 2017.