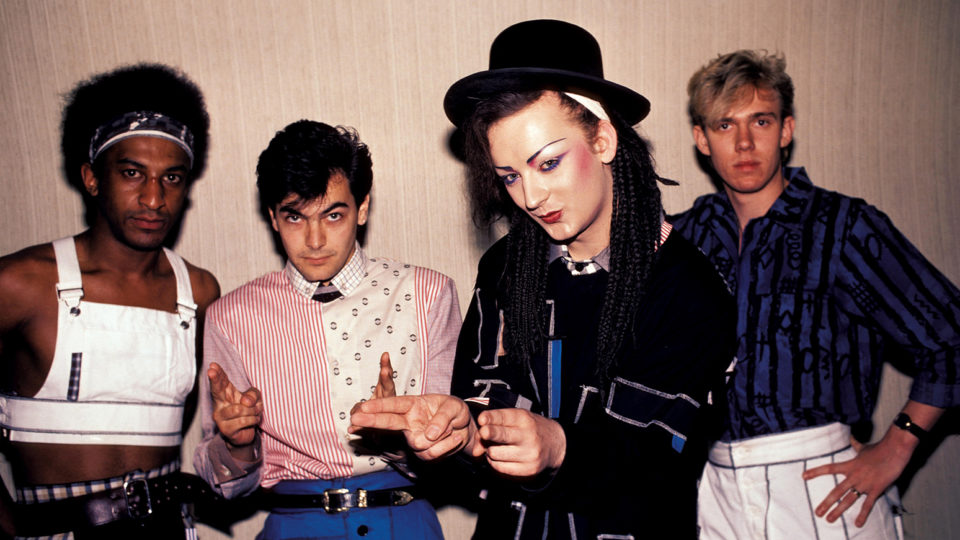 Leaving home at the age of sixteen, George Alan O’Dowd sang with Bow Wow Wow under the stage name Lieutenant Lush. After his tenure at the Blitz Club ended, O’Dowd formed a band with bassist Mikey Craig, drummer Jon Moss, and guitarist Roy Hay. They named the band Culture Club after their diversity.

The new wave band released two singles, “White Boy” and “I’m Afraid of Me” that were unsuccessful on British single charts. Their international breakthrough came with the release of their third single “Do You Really Want to Hurt Me” which peaked at number two on the Billboard Hot 100. The reviews were unfavorable at first but they it did not stop Culture Club from solidifying their place in the Second British Invasion.

“Do you really Want to Hurt Me” laid the foundation for Kissing to Be Clever—their 1982 debut album that featured a multilayered sound that transcended the boundaries of pop.

George said the song was about his relationship with drummer Jon Moss and all the other men he dated. Therefore, “Do You Really Want to Hurt Me” synthesized the feelings of insecurity and expression.

“I always had these awkward relationships, which only became awkward when other people became involved,” George said. “Jon was fine shagging me until his mum met me. He lived in a posh house in Hampstead and I was invited round for dinner. His mum answered the door and went ‘Oh!’. I ended up having to eat with the servants in the kitchen.”

Culture Club was asked to perform on Top of the Tops, a BBC weekly program that featured popular musicians, when Welsh rock and roll singer Shakin’ Stevens suddenly backed out. After the performance, Boy George received heavy criticism from Radio 1 and the press for his exotic self-presentation. George recalls newspapers asking, “Is it [Boy George] a boy or a girl?”

Throughout his career George embraced his androgynous style that was often publicized as a visual gimmick. His look was largely popularized in Culture Club’s eccentric music videos.

“ I did use a lot of make-up at the time, and it really freaked people out, George said. “People couldn’t deal with my sexual energy when they met me, and I loved that. It was my life’s work.”

Kissing to Be Clever featured other prominent Culture Club hits such as “I’ll Tumble 4 Ya” “White Boy” and “Time (Clock of the Heart). These songs served as constant interchanges between traditional soul, synth pop, and disco funk. The blending of various cultural sounds and musical textures was not just a trend started by Culture Club but an obsession.

Their sophomore LP Colour By Numbers was a smash hit, selling more than 10 million copies worldwide. Boy George responded to Colour By Numbers being ranked in the Top 100 Best Albums of the Eighties by saying, “Well it should be.”

Recorded with Steve Levine in Red Bus Studios, Culture Club sought to build off the success of their debut album by collaborating with various English artists. Backup singer Helen Terry helped save Colour By Numbers from the tropes of Tropipop found in Kissing to Be Clever.

Colour By Numbers featured their most coveted single “Karma Chameleon” which peaked at number one on 17 weekly charts around the world. Furthermore, “Karma Chameleon” became the biggest selling single of 1983. The anthem-like pulse of the melody subdued the dark lyrical message.

“The song is about the terrible fear of alienation that people have, the fear of standing up for one thing,” George said. “It’s about trying to suck up to everybody. Basically, if you aren’t true, if you don’t act like you feel, then you get Karma-justice, that’s nature’s way of paying you back.”

Colour By numbers paid homage to an Elton-John-like sound in “That’s The Way (I’m Only Trying to Help You)” borrowed from the melodies of Gilbert O’Sullivan in “It’s a Miracle” and mimics Stevie Wonder’s “Uptight” in the opening of “Church of the Poison Mind.” Geroge had a rather non-chalant response to the album by stating, “I thought some of the singing was out of tune […] definitely the best Culture Club album, but I don’t know if it’s my best record.”

With tension mounting between the band mates, alleged physical and verbal abuse spurring between lovers George and Moss, and rampant drug consumption, Culture Club depended heavily on their critically-anticipated third album Waking Up with the House on Fire.

Although Waking Up with the House on Fire served as their third consecutive platinum album in America, it was viewed as a rushed. The only single to gain traction was “The War Song” which stood as an allegory for emotional conflict. The single cracked the top 20 Billboard Hot 100 in the United States. Excess of drugs, relationship struggles, and fame, very well could have contributed to the disappointment.

As Culture Club split, Boy George’s illustrious career was tarnished by his cocaine and later heroin addiction. His youngest brother David O’Dowd said George had a $1,200-a-day habit that made him lose 56 pounds.

“We’ve just been waiting for a phone call from a reporter to tell us George has been found dead from a drug overdose,” said David “The only reward I want is my brother back—his habit is destroying my family.”

His addiction came as a shock to the public. Once “the harmless, lovable windup doll of pop, a cartoonlike fantasy figure […] who preferred a cup of tea over sex” was transformed into a shadow of his old self.

George was often outspoken against drug consumption. He responded to his own addiction by stating, “I’m an out-and-out heroin junkie […] you don’t have to be a doctor to know that I’m dying.” George would later revoke this statement on live television.

At the pinnacle of pop Culture Club fell and never really got back up. While pursuing a solo career, George was a part of numerous short-lived Culture Club reunions. George called a 1998 tour a, “nostalgia trip” featuring not type of, “Oprah Winfrey-type confessionalism” between band mates. The release of their new album Tribes has been delayed on numerous occasions.