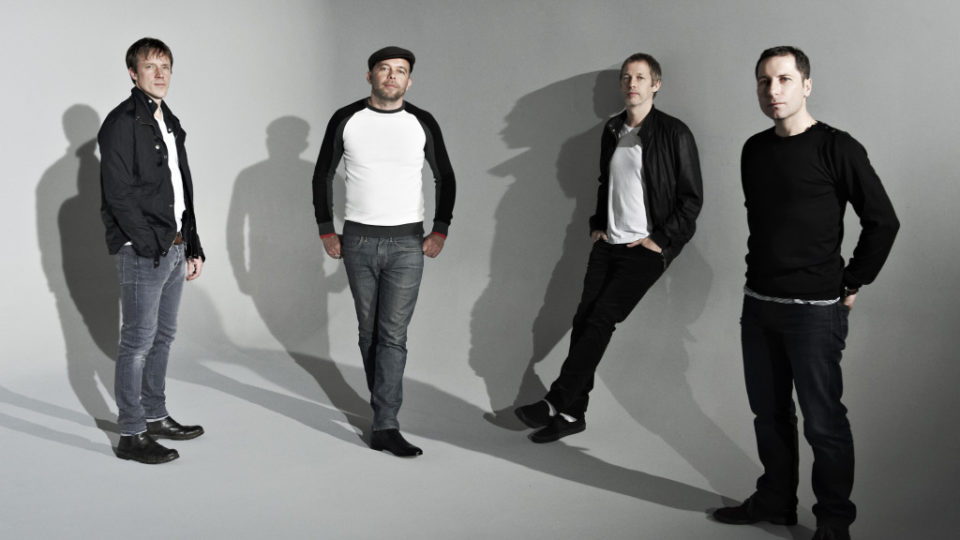 I recall in full detail the moment that I first heard “Pulsar”, a track recently released by British rock band Ride. Entirely unexpected, its announcement instantly stirred excitement and a slight skepticism out of my fandom; the group was hardly five months removed from its two-decade hiatus, and the reality of their return hadn’t quite registered. Filled with eagerness and pleasant memories of past listens, I plugged my iPhone into my stereo, positioned myself perfectly on the couch facing the living room speakers, and pressed play.

Less than two minutes in, the anticipatory flutters in my chest were replaced by quakes of uneasiness. An intro featuring a slow build of haloed chimes quickly gave way to a fuzzed out bassline, and Mark Gardner’s voice signaled the start of the first verse. But something felt off. The sound was conspicuously simple in a way that lacked depth, straightforward in a way that bordered on predictable.

Gone was the effusive pairing of crafty songwriting and sweetly sung vocals. Even their climb toward crunchier guitar and trademark walls of sound lacked the punch that came standard with its original run, and was recreated with moderate success on comeback LP Weather Diaries. When the song faded out on the heels of a half-hearted climax, all that permeated an enveloping silence in the room was a lingering reverberation of the final lyrics in my mind: “We’ve come so far, we’ve come so far.” Feeling let down, the words rang regrettably true.

Prior to that November afternoon I had never considered the possibility that listening to Ride, or any of my favorite bands for that matter, would end in disappointment. Or could end in disappointment. But today, three months later, there isn’t a more appropriate way to describe the visceral feelings that remain after enduring three runs through Tomorrow’s Shore, a four-track, Pulsar-featuring EP that bears little resemblance to the monumental sounds and soaring heights for which this foursome has been consistently lauded.

Where Ride of yesteryear strode the line between force and beauty, the 2018 version trips over it. As difficult a pill as that may be to swallow, it isn’t because I expected a surprise mini-album to recreate the band’s flirtations with perfection. More importantly, and egregiously, I took the quality of their music for granted.

Birthed from the hysteria of Alan McGee-helmed Creation Records, Ride initially latched on to the delirious shoegaze of label mates My Bloody Valentine, Swervedriver, and Slowdive to create their own brand of distortion-laden guitar music. After blowing out the expectations that a self-titled EP carries, two cutting-edge full lengths landed the band smack in the middle of the Beatles/Velvet Underground spectrum.

Nowhere in 1990 marked a furious channeling of iconic Jesus and Mary Chain’s experiments of volume, and the acidic pop songs of Going Blank Again less than two years later dissolved expectations of post-Nevermind grunge. Explorative in a way that preemptively outpaced Britpop, the only quality missing from its early dynamism was longevity.

Despite residing in a place both distinctive and at the heart of British new wave rock music, the beginning was the end for these Oxford chart-toppers. McGee’s fiendish obsession with promoting his label’s signings landed the operation effectively bankrupt, and a combination of relentless touring and creative differences strained the relationship between Gardner and fellow guitarist Andy Bell beyond repair. Cohesiveness quickly dwindled as the two were left writing songs in isolation, and they split in the midst of recording Tarantula in 1995.

Still in their twenties, and left with a similarly short-lived fate as their peers, label, and the genre at large, Ride’s triumphant burst was poised to be fossilized, a relic to be remembered fondly if not briefly. But the passage of time was an unforeseen balm that both preserved the lore of a fruitful period and attracted a delayed cult following, offering an entry point to younger demographics intrigued by the music of shoegaze’s offspring. Rather than etched in stone, the most efficacious releases of the day were crystallized as sparkling reference points for those looking to ring gut-wrenching emotion out of pristine production and billowing layers of delay and reverb.

I was all too aware of these contexts when I read the press release for Tomorrow’s Shore, and couldn’t hold back my frustration as I digested the supposedly revitalized group spit out uninspired lyrics and unimaginative structure. On “Keep It Surreal”, Gardners vocals frankly aren’t good enough to merit a place so high in the mix, and the backing instrumental transformation sounds so bloated that they make the three minute duration feel like it’s overstaying its welcome.

The cringeworthy-titled “Cold Water People” inexplicably interjects acoustic guitar before Bell’s pedal board offers a moment of reprieve for an utterly forgettable track. “Catch You Dreaming”, weaved together with patches of synthesizer and subtle percussion, is heavy in its electronics touches and light almost everywhere else; like the song before it, an unbearable chorus- complete with porously poppy “nah-nah-nahs” echoing behind it- renders the outro a welcomed break.

This gratuitous bundle hardly seemed a reason for me to call into question the stability of artists that changed the way I interacted with music, but here I was, reeling. I scoured the band’s latest material for clues of an imminent decline, and came back empty-handed. Sure, “All I Want” went a bit overboard in its vocal processing, and I suppose “White Sands” capped off the new album flatly for my liking.

But the album’s namesake “Weather Diaries” did truly capture the tenderness that rose beneath all of the glorious noise I had grown to love; “Charm Assault”’s guitar counterpoint fit like a Tetris-block in between a lively and rejuvenated tone. The writing wasn’t on the wall, and I struggled to reconcile with the small-batch dud left ringing in my ears.

But everything changed a few hours later when I queued up “Leave Them All Behind”, undoubtedly my all-time-favorite Ride song. As the opener to its breakthrough second album, it had everything that challenged my preconceived notions: immaculately mastered, precariously heavy on overdrive, and dizzying length for a single. Now, reconsidering recordings I had previously taken as gospel, I nervously readied myself to hear them under significantly less stable conditions.

And to my delight, not only this song but the entire stream of Going Blank Again’s tracklist sounded better than I had ever remembered. In this new light I felt the remarkable balance of their nonconformity. This record wasn’t misrepresented, it was a landmark, a monument of innumerable influences that, suddenly, was never guaranteed to be.

In time I’ve come to understand that the music wasn’t of higher quality now than it had been the day it came out more than a quarter-century ago. Rather, I needed a catalyst to shake the illusion that great music and great musicians were inevitable somehow.

Unbeknownst to me, it was a release of such stark underachievement that ultimately didn’t tarnish the relationships I had formed with one of my most cherished band’s output, and instead forged an appreciation I couldn’t have held before. The second I felt the fragility of my idealistic impressions, I clung tighter to the shining instances of stylistic invention and bravery that stimulated my own creative ambitions.

Tomorrow’s Shore is an isolated case at the same time that it acts as a reminder that any artist can misfire. The records that define eras, Ride’s included, are a product of magical circumstance, not least of which is a concerted effort not to fear failure. “You just had to create a wash of noise and suddenly you weren’t afraid anymore,” drummer Loz Colbert said of its early successes to The Guardian in 2015.

The boldness that left a wince on my face was the same kind that first left me thinking they could do no wrong. Glorifying and idolizing, however tempting, only perpetuates the infallible stature that isn’t warranted and eventually yields disappointment. On the other hand, listening honestly, fearlessly, and without slipping into corners of comfort opens doors and only adds satisfaction. Even a compilation of throwaways can offer something rewarding.